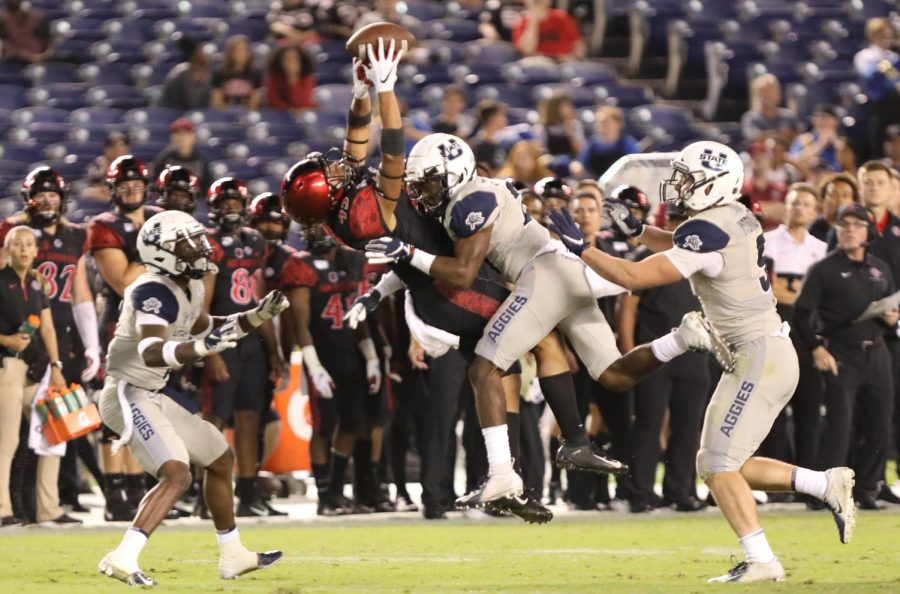 With 1:18 left in the fourth quarter, San Diego State football senior quarterback Ryan Agnew had the opportunity to eliminate the 20-point deficit the Aztecs encountered entering the final frame.

Following three straight incomplete passes, Agnew faced fourth-and-10, and the potential comeback was on the line.

The Texas native attempted to escape pressure but was ultimately sacked for 37 yards to give Utah State a 23-17 win on Sept. 21 at SDCCU Stadium.

The Aztecs (3-1, 0-1 MW) struggled putting numbers on the scoreboard until the final quarter.

The resurgence came into fruition during SDSU’s first drive of the fourth quarter on fourth-and-15 from the Aztecs’ 25-yard line.

Agnew scrambled around both sides of the field for 10 seconds before slinging a 25-yard touchdown pass to sophomore wide receiver Kobe Smith, who was left uncovered in the end zone.

Agnew said he was fortunate to have been able to extend the play to find Smith open.

“It was a miracle at that point,” Agnew said. “I just tried to buy enough time, try to find an open guy and Kobe made a great play being open and I was lucky to deliver it to him.”

During the Aztecs’ next drive, redshirt freshman Jesse Matthews made a 20-yard reception over a Utah State sophomore cornerback Andre Grayson while being surrounded by two other defenders, extending the drive on second-and-long.

Agnew later connected with sophomore wide receiver Isaiah Richardson on fourth-and-5. He burst through the Aggies’ defense for a 49-yard touchdown, bringing the score to 23-17 with 5:19 remaining.

All of the sudden, the Aztecs’ offense sparked after appearing nearly lifeless throughout the first three quarters.

But unfortunately for the Scarlet and Black, it was not meant to be.

Head coach Rocky Long said the team was resilient despite only scoring three points in the first half.

“I was happy we didn’t give up and tried to get back into the game,” Long said. “We just got back in the game too late, but I thought the offense kind of moved the ball all day long.”

Agnew totaled 281 yards and two touchdowns but threw an interception for a touchdown during SDSU’s second drive of the game.

Long said the pick-six killed the Aztecs’ momentum on offense.

“I think everything was going fine until we threw an interception that was run back for a touchdown,” Long said. “And all of a sudden our offense might have lost some confidence or something.”

SDSU’s running game, on the other hand, did not see as much prosperity as it did one week prior against New Mexico State.

Sophomore running backs Chance Bell and Jordan Byrd absorbed most of the carries, but the duo was held to three-and-a-half and two yards per carry, respectively.

But SDSU’s defense played a big part in the Aggies’ lack of success on the ground.

The defense allowed 293 yards in the air, but Utah State junior quarterback and NFL draft prospect Jordan Love was unable to find the end zone.

After allowing 13 points in the first half, the Aztecs’ defensive unit showed out in the second half, succumbing only three points to the Aggies.

Despite allowing one rushing touchdown, Long said the defense did not do enough to win.

“Not good enough,” Long said. “It’s never good enough if you lose. We gave up some yards, but somehow we made them kick field goals instead of scoring.”

The Aztecs now enter a bye week sitting at 0-1 in conference play.

While things might look bleak for SDSU following the loss, Agnew said he admired the fight the team showed.

“I guess the only thing that we can take positive from this is we didn’t quit,” Agnew said. “We didn’t fold when we had many chances to, so it was really good to see those guys fighting doing everything we can to win a football game.”