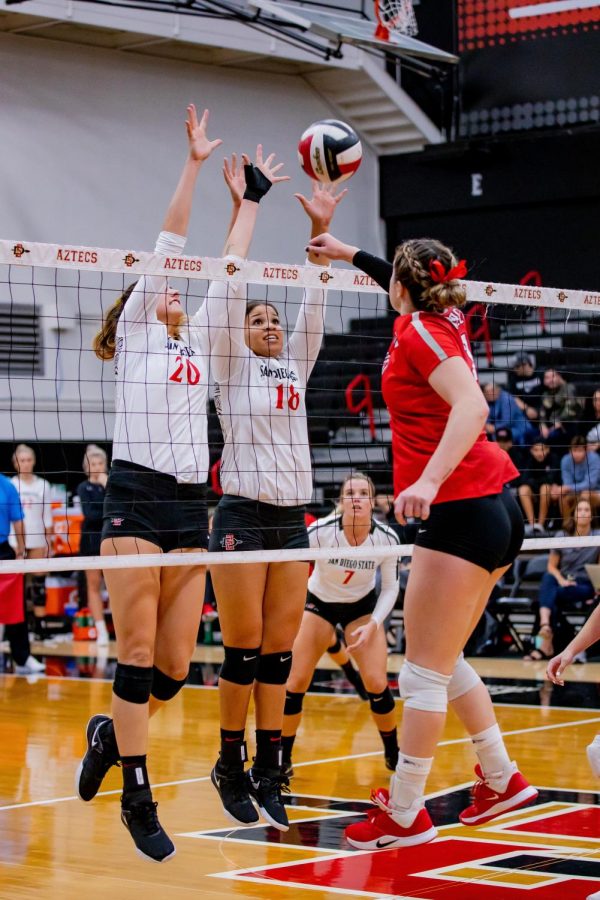 Junior outside hitter Lexie Hamrick (20) and senior middle blocker Tamia Reeves (18) attempt to block an attack from a UNLV player during the Aztecs' 3-1 loss to the Rebels on Oct. 3 at Peterson Gym.

Head coach Detire Collins-Parker expressed her frustration with the results of the game.

“Disappointing,” Collins-Parker said. “We didn’t make plays when we needed to.”

SDSU racked up a total of 16 attack errors during the match.

“We had a tough server; we didn’t start off passing well,” Collins-Parker said. “Our confidence (got) rocked a little bit.”

However, the Aztecs had five service aces with junior defensive specialist Sam McGrath claiming two of them.

After another loss in the second set, Reeves, who is third in the Mountain West Conference in hitting percentage (.382), said the team was determined not to let the Rebels notch the sweep.

“We don’t lose at home,” Reeves said. “And we definitely don’t lose in (three sets) at home, so I think that’s what kick-started our momentum into the third game.”

SDSU started the third set off with the momentum it needed, posting a 10-2 run.

The Rebels came back within three points before the Aztecs sealed the third set 25-20.

Senior outside hitter Hannah Turnlund, who recorded a team-high 15 kills, said the Aztecs committed too many errors.

“We made crucial mistakes at crucial times,” Turnlund said. “The other team had a string of points that they shouldn’t have had.”

There were a total of eight ties in the fourth set, but the Aztecs could not hold the lead.

Turnlund said both her and her teammates had great hopes of making this a five-set game.

“I thought we had woken up,” Turnlund said. “I was ready to play and I think all of us were ready to play. I thought we were going to win (the fourth set) and take this to (the fifth set), but it didn’t go that way.”

Overall, SDSU recorded 50 kills, 120 attacks and a 283 attack percentage for the night.

Collins-Parker said the offense alone was not enough to come back and win the game.

“We still have to get better defensively on our side,” Collins-Parker said. “You’re doing enough to win, but you don’t win when you got to pass and (give) up five straight overpasses at the end of the game.

Defensively, Collins-Parker got four block assists from sophomore middle blocker Andrea Walker who recorded her first start of the season.

Collins-Parker said Walker’s improvement will come with more time on the court.

“The more that she gets playing time, the better she’s gonna be,” Collins-Parker said. “She’s dynamic. She made some key blocks at the end, and she did a good job.”

The Aztecs look to step up their game against New Mexico this Saturday at 2 p.m. at Peterson Gym.