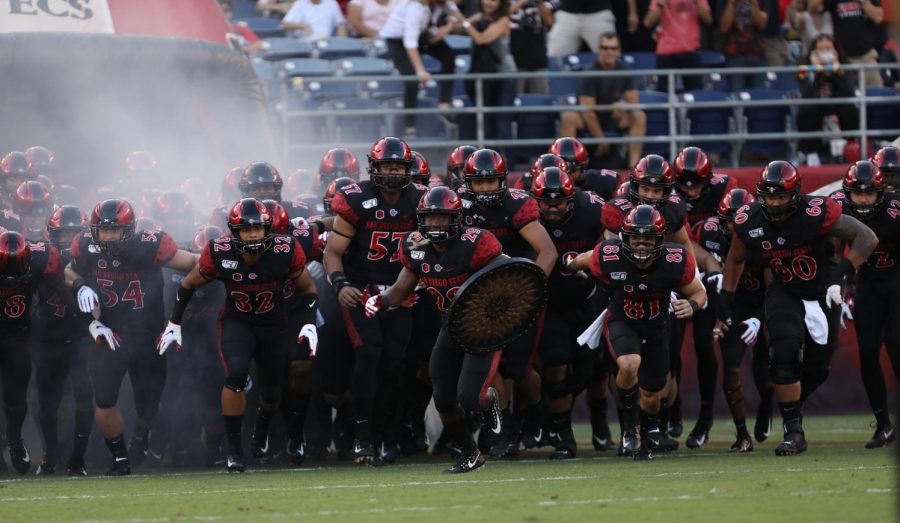 SDSU football is among the many programs across the state of California impacted by SB 206.

The college sports landscape could soon see monumental changes to how student athletes are compensated for their time and talents.

Senate Bill 206, also known as the Fair Pay to Play Act, was signed into law by California Gov. Gavin Newsom on Sept. 30, paving the way for California student athletes to be eligible to make money off their names and likeness by 2023.

Opportunities for athletes to make a profit off their names and likeness could include revenue from sponsorships, merchandise sales and more.

Currently, student athletes are granted scholarships in exchange for playing their respective sports. But recently, calls have grown louder for student athletes to be paid beyond tuition and fee waivers.

Even though the rule is not expected to go into effect until 2023, coaches and players in San Diego State’s athletics program have shared some speculation about the impact SB 206 could have on college sports.

SDSU head football coach Rocky Long declined to share his personal opinion on the passing of the bill during an SDSU football press conference on Oct. 1.

However, Long said the passing of the new bill isn’t on his mind since the changes won’t be in effect for another four years.

“It doesn’t happen until 2023, so I’m not thinking about it because it will change dramatically between now and then, so it is no big deal,” he said.

“You know what? By the time that thing passes, you can find me on a golf course,” Horton said.

Some student athletes have expressed hope the bill will support players from disadvantaged backgrounds.

“Some kids don’t come from wealthy backgrounds, and it really helps for kids who struggle back home,” Eden said.

The bill does come with potential drawbacks that could impact SDSU athletics.

Several California universities, including UC Berkeley, Stanford and USC, joined the NCAA in opposing the governor’s legislation, according to The New York Times.

SDSU football’s senior tight end Parker Houston said during an Oct. 1 press conference that it would be unfair for an entire school’s program to be barred from competition in NCAA championship games.

He said if football took advantage of the new legislation, other programs at the university who are also competing for titles could be disadvantaged.

“I think it really affects a lot of other teams,” Houston said.  “I think guys like the basketball players, baseball players and some of the other sports, (like) the soccer players, I think they would really suffer.”

Houston said the change is a good start for players to begin receiving compensation for their time and effort they give to their school’s athletic programs.

Kyle Betz and Michael Cline contributed to the reporting of this story.