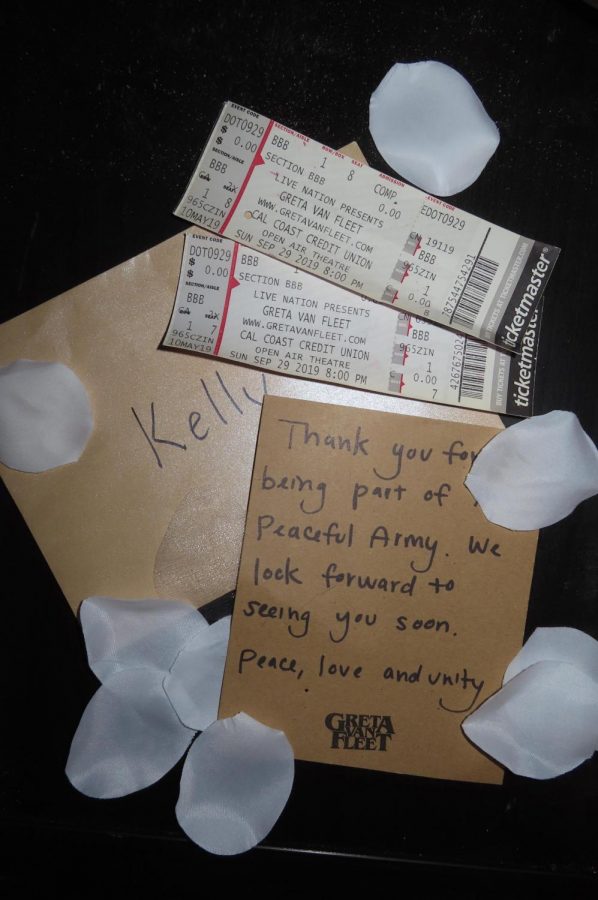 Picture this: After coming home from spring break, you find a large yellow envelope addressed to you in your mailbox.

You cannot seem to remember ordering anything online in the past few weeks. You rip open the package assuming its junk mail, but inside you find another gold envelope with your name written on it in black sharpie. You carefully tear the sides and white rose petals flutter to the ground.

Who sent you this?

The final item you uncover is a handwritten note reading,  “Thank you for being apart of the Peaceful Army. We look forward to seeing you soon. Peace, Love and Unity,” signed Greta Van Fleet.

To this day, I am not exactly sure how the band discovered my existence, but I do know it was the most wholesome feeling knowing the band I had spent countless hours listening to acknowledged me.

Fast forward six months, I eagerly took my hand painted Greta Van Fleet denim jacket out of my closet, whipped out my black leather pants and stepped into my snakeskin boots.

This was my fifth time seeing Greta Van Fleet, except this time I felt like my life had been ripped out of a scene from Cameron Crowe’s notorious movie, “Almost Famous.”

The lights dimmed at Cal Coast Open Air Theatre on the evening of Sept. 29 as Josh, Jake and Sammy Kiszka ran onto the stage following the drummer and the band’s long-time friend Danny Wagner.

Since the last time I saw Greta Van Fleet, the band won their first Grammy for their double EP, “From the Fires,” received a huge partnership with Bose speakers and announced a tour with Metallica.

From the entrance alone I recognized a new era of America’s new favorite rock band.

They were no longer the band of brothers from Michigan trying to do the whole “classic-rock thing,” but instead showcased a new stage arrogance that was seemingly glorious.

After being bashed by Pitchfork and other notable rock critics, the band has walked through the fire of hate and arose from the black smoke ready to show the world that they are never leaving.

They opened with their hit, “When The Curtain Falls,” which appears on the band’s first full album, “Anthem of the Peaceful Army.”

The crowd jumped in excitement, releasing the anticipation they felt waiting for this show.

The band continued the performance with their top tracks including “Highway Tune,” “Black Smoke Rising” and my favorite, “Flower Power.”

Lead singer Josh Kiszka led into the anthem saying, “This next song is one of the first we ever wrote together. And so it’s been apart of the score of the dance. One of my favorites. You ready?”

Like “Flower Power,” many of the band’s tunes feature lyrics of peace, love, serenity and self-discovery.

So much so, they’ve titled their fan club as The Peaceful Army, which promotes knowledge, connection and equality.

The crowd itself embodied this mentality as they made conversation with one another, talking and connecting about their favorite songs, where in the world they were from and what they were most excited for.

The concert included a cover of “The Music Is You” by one of the band members’ favorite classic artists, John Denver, as well as a Labi Siffre cover of “Watch Me.”

They continued with a Black Flag exposition which led to 10 minutes of the band jamming out, showcasing their on-stage abilities.

Lead guitarist, Jake Kiszka, flipped his guitar over his head playing flawlessly along to the song.

This trick is equally as exciting every time I’ve witnessed it.

The following song was the band’s acoustic bop, “You’re the One,” a light-hearted track on the conquest of love. Josh smirked off into the audience, blew kisses into the crowd and talked to some fans flirting with the ideas of the song.

The encore closed the night with a single off of the “Anthem of the Peaceful Army” album called “Lover, Leaver (Taker, Believer),” which lasted 15 minutes.

It was in this encore that I felt a deep sense of pride over watching one of my favorite bands look better than they ever had before. It appears to me that the members have aged with wisdom, even though they are only in their early twenties.

The band has posted about the time they’ve dedicated to living in nature while writing and rehearsing music. I could feel the band has been reborn from its past self.Greta Van Fleet has toyed with the discussion of a new album being released in the coming months. I am hopeful that when that does happen, the new energy the band has resurfaced with will be reflected in that album.

As I looked around the packed stadium, I was able to see that Greta Van Fleet had accomplished the things they had wished for: a sea of people connecting in unison over the themes and messages that were rooted collectively from their own minds.