Editorial: SDSU should have listened to students before banning motorized scooters 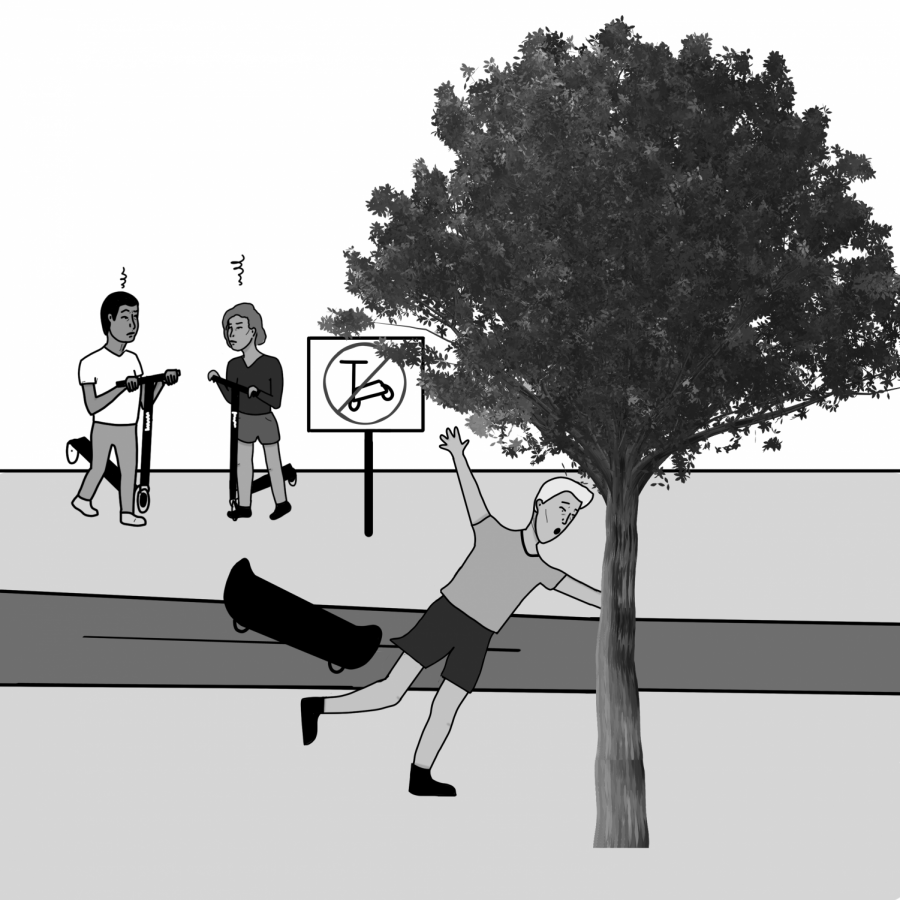 San Diego State has a nasty track record when it comes to transparency, and this isn’t the first time we’ve had to take to our opinion pages to discuss it.

When the university announced the decision to ban micro-mobility devices – including motorized scooters, bikes and skateboards – in a campus-wide email this August, our newsroom was shocked. Given the popularity of dockless scooters in particular, it seemed clear to us the student voice had been overridden.

Turns out, we were right.

Through an investigation conducted by one of our editors, we learned the ban was quietly approved by the University Senate an entire five months before students caught wind of it.

And, to make matters worse, the decision was made with almost no student input.

Director of Parking and Transportation Services Debbie Richseon told The Daily Aztec she compiled a team of 12 students and faculty members to “diagnose” the problem before taking it before the University Senate. Only two of the team members were students, and only two students with voting rights were present at the senate meeting where the ban was approved.

How exactly can four students speak to the interest of the almost 35,000 enrolled? Answer is: They can’t, and they especially can’t when their presence has been watered down by 86 faculty, staff and administrators.

Why is it so hard to listen to students? It’s almost like they forgot we go into debt to pay their salaries.

And, to top it all off, the data the University Senate used to justify the ban was severely ill-informed.

According to the meeting minutes, Richeson told the senate there was no way to conclude whether an increase in scooter, bike and skateboard accidents can be connected to motorized scooters in particular. Despite the lack of clarity, the ban was passed shortly after this.

Five months later, a story posted to the SDSU Newscenter website said the ban was adopted due to a 22% increase in scooter, bike and skateboard accidents. What it didn’t mention was that merely 17.9% of accidents can be tied back to scooters of all kinds, not just motorized ones.

Meanwhile, a whopping 73.9% of accidents occurred because of skateboards. If safety is the problem here, why not ban all skateboards?

It is still not clear why SDSU banned scooters, as claims of promoting safety seem diluted by the fact that the university has no way of knowing if motorized scooters are even the real problem.

Regardless, it is disheartening to witness yet another example of SDSU not acting in the best interest of students, especially when these decisions are made behind closed doors. Just last semester, the university faced criticism for being untransparent about the harmful nature of the roof project on the Professional Studies and Fine Arts building, ultimately leading to over two dozen reports of illnesses from those who worked in the building. When that happened, President Adela de la Torre told us things would change and that the campus had learned its lesson.

Clearly, that is not the case.

This feels particularly ironic given SDSU just embarked on its strategic planning process, a process that is highly dependent on student input. In a Sunday appearance at a fraternity event, de la Torre told the crowd, “Please participate because your input is important.”

Here’s some input from the students who know SDSU best: A university without transparency isn’t a university we can trust.

For a school that has ambitious plans of expanding to a second property in Mission Valley as well as improving on the Imperial Valley campus, embracing sustainable modes of transportation is paramount to SDSU’s motto, “Leadership starts here.”

Be the leaders you want us to become. Be transparent.