Aztecs begin longest road trip of the season in Wyoming 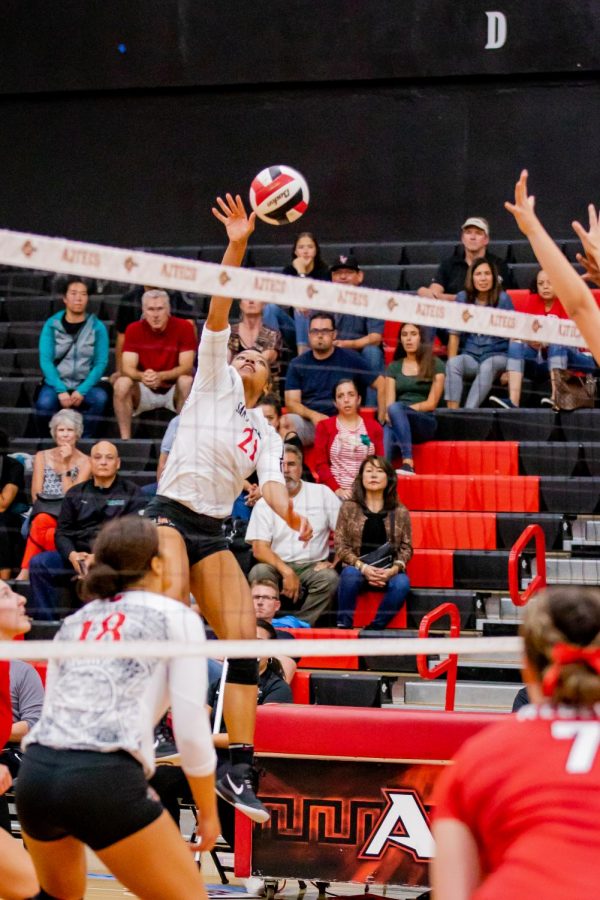 Sophomore outside hitter Victoria O'Sullivan spikes the ball in the Aztecs' 3-1 loss to UNLV on Oct. 3 at Peterson Gym.

The Aztecs will play four Mountain West Conference road games in the next two weeks and travel a total of more than 5,000 miles.

Head coach Deitre Collins-Parker said they will focus on fundamentals each match.

“We’re going one game at a time,” Collins-Parker said. “For us, it’s about our ability to come in, do the basics – pass, set, hit – and manage our side of the court. We know what they’re going to do. We’re going to be compared as we always are, as long as we take care of our side, we’ll be able to battle with anyone.”

As the season goes on, Collins-Parker said she has made adjustments to benefit the team.

“We have to make changes,” she said. “Every team is different and the more options we have, the better chances we have. We have teams where we need to have four big bodies (at the net).”

As those adjustments are made, sophomore outside hitter Victoria O’Sullivan said the team will need to focus on the game ahead.

“(We need to stay) fresh, coming in with the right mentality for every game,” O’Sullivan said. “We’ll be tired, but it’s all in your head. (It will be a) good challenge for us.”

When SDSU beat New Mexico on Oct. 5, the Aztecs came into that game 1-2 in conference play.

O’Sullivan said the team had compete.

“The mentality was ‘we had to win,’” she said. “Everybody go in hard, we knew what we had to do and it was all about executing.”

Four players executed and got 10-plus kills against the Lobos.

Junior outside hitter Erin Gilchrist was one of those players to record double-digit kills as she got 11.

Gilchrist said it was crucial to get back to 2-2 in MW play before the two-week road trip.

“We needed that confidence before heading out of our gym,” she said. “It is always harder on the road and you don’t have people cheering for you, so that was something that we needed just to be confident heading into these away matches.”

The 6-foot-1 outside hitter said the team’s goal during the road trip will be to focus but to also stay in the moment.

“(We have to get) a lot of rest and be ready,” Gilchrist said. “These are some big teams in conference and we have to go after it. We’re trying to focus on our side of the net as much as possible, but get a good scout. The more we focus on our game the better we play.”