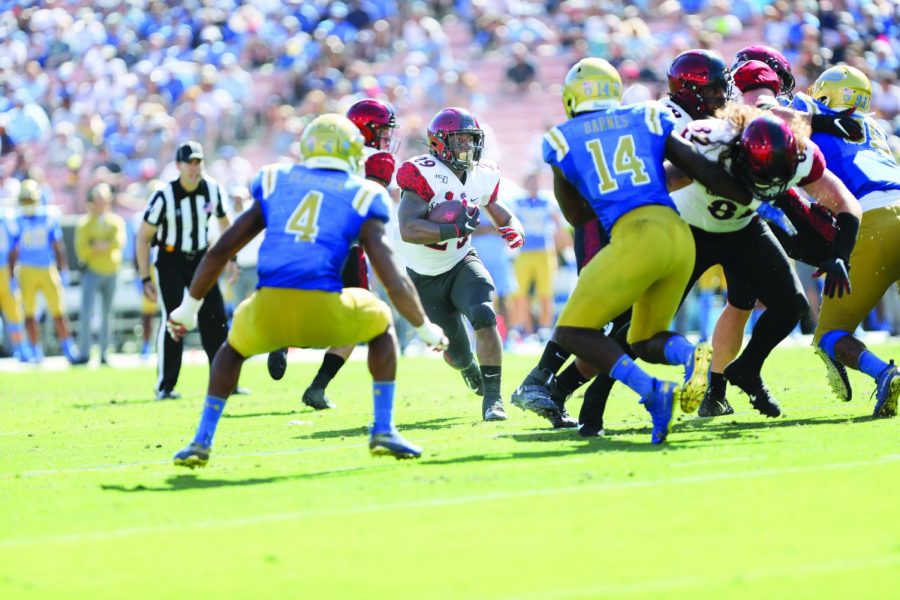 Senior running back Juwan Washington looks to run the ball upfield in the Aztecs' 23-14 win over UCLA on Sept. 7 at the Rose Bowl in Pasadena, Calif.

The Cowboys (4-1, 0-0 Mountain West Conference) defeated Missouri, Texas State and Idaho to start their season before falling to Tulsa on Sept. 21.

Long said Chambers is a vital part of the Cowboys’ ground game.

“They’re in wildcat all the time because their quarterback – who actually can throw the ball very well, too – is a big, strong guy that they use in their running game,” Long said.

Chambers’ ability to run the football is complemented by two underclassmen running backs.

Freshman running back Titus Swen and sophomore running back Xazavian Valladay have split carries on offense due to an ankle injury suffered by senior running back Trey Smith on Sept. 21, who is expected to miss eight weeks.

Swen is second on the team in rushing with 302 yards and a touchdown, and Valladay is right behind him with 225 yards with three touchdowns.

“They’re running the heck out of the ball,” Arnett said. “(Chambers) is like another tailback back there. They’ll have 10 or so designed quarterback runs where the tailback essentially becomes the fullback.”

The Aztecs look to counter with their own ground game. Senior running back Juwan Washington made his return from an ankle injury last Saturday against Colorado State.

Washington totaled 85 yards on 22 carries, including a three-yard touchdown catch/

Against the Rams, Washington received more touches than any other SDSU running back but did not start the game.

Long says the Aztecs will continue to run a by-committee system in the backfield until Washington has fully recovered from his injury.

“I think Juwan’s a lot better, but I don’t think he’s 100%,” Long said. “We’ll continue to use all the running backs that are healthy and hopefully get him where he gets to 100%, then he would be the primary ball carrier, (but) he’s not ready to be yet.”

Lessard made his return to the field three months ahead of schedule after tearing his ACL and MCL in his left knee in March.

“That’s what we’ve lacked this year, is having those big, long runs – either for touchdowns or big gains,” Horton said. “We haven’t done that, and that’s where we need to really improve. But Juwan brings an added element, because he’s done that in the past.”

Although SDSU welcomed back two offensive starters to the lineup, senior defensive back Kyree Woods suffered a torn ACL against the Rams, ending his season.

Woods became one of the most utilized players in the secondary this season due to his versatility to play both strong safety (warrior) and cornerback.

“Kyree was having a great year; he was playing really, really well,” Long said. “What he did was give us real depth. (By) losing him, we basically lost two players.”