Rendering of the SDSU Innovation District in Mission Valley.

After San Diego State awarded a $250 million contract for its new multi-use Mission Valley stadium in February, President Adela de la Torre expressed optimism over the university’s private negotiations with the City of San Diego over the sale of the land.

“I am proud of the team we have assembled to represent the university in these important negotiations,” de la Torre said at the time. “I am confident they will ensure this process proceeds in a way that is fair and equitable to both the university and San Diego residents.”

But nearly 10 months have passed since the two sides entered into negotiations, and SDSU and the city remain deadlocked over the sale and transfer of the Mission Valley site.

Now, the university is preparing to submit a formal offer to city officials.

In a conference call with journalists on Oct. 10, SDSU Assistant Vice President of Business and Financial Affairs Gina Jacobs said the university would share its Mission Valley plan as an official agenda item to the San Diego City Council on Oct. 14.

But before the university presents to the council, SDSU announced it had broken a confidentiality agreement with the city over their Mission Valley discussions.

In the conference call, SDSU Vice President of Business and Financial Affairs and Chief Financial Officer Tom McCarron said the memorandum of understanding regarding the confidentiality of discussions between the city and university was no longer necessary.

He said the CSU Board of Trustees approved the decision because negotiations moved to an open forum with the city council and the draft appraisal is now public.

“It is clear the confidentiality of (memorandum of understanding) is no longer needed,” McCarron said.

Despite the agreement, news broke on Oct. 7 over key points of contention between the university and city officials. In particular, the two sides disagree over language in the SDSU West ballot initiative, which voters approved in 2018, regarding the River Park construction, the fair market value of the land and responsibility for stadium demolition costs.

JMI Realty CEO John Kratzer, a member of SDSU’s Mission Valley negotiating team, said the university would construct a two-lane at-grade Fenton Parkway bridge over Interstate 8 in exchange for a reimbursement agreement in the form of transit credits from the city at a later date.

The city has planned to build the bridge — now estimated to cost $21 million — for two decades. Kratzer clarified the bridge construction would be analyzed under a separate EIR.

De la Torre said the bridge would be one part of the university’s efforts to mitigate traffic concerns over the new development, also saying SDSU envisions a transit-focused project.

Additionally, she said the draft Environmental Impact Report released in August was only a draft, signaling the university would continue to seek advice and revise its report as necessary.

And the university will construct the 34-acre River Park at an estimated price tag of $30 million, according to de la Torre.

“SDSU will be responsible for the full cost to build and maintain the River Park in perpetuity,” she said. 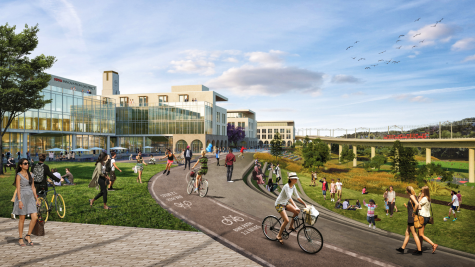 But SDSU also disagrees with the city over costs to demolish SDCCU Stadium and the site’s fair market value.

De la Torre said the land appraiser, hired jointly by the city and the university, appraised the Mission Valley site with costs to demolish the 52-year old stadium. She said the law required the fair market value appraisal to take stadium demolition costs into account.

“Why would we add the cost of the demolition on top of the fair market value price of the land, and pay for it twice?” de la Torre said in the conference call.

Furthermore, de la Torre said the fair market value of the 132-acre parcel was determined in 2017 to be $68.2 million, with the cost of stadium demolition between $10 and $15 million.

“We will pay for (the demolition),” de la Torre said.

City officials contest the $68.2 million figure from the 2017 appraisal. An analysis released by the city’s Office of the Independent Budget Analyst concluded the fair market value could be as high as $104.5 million in 2020 dollars, and the 2017 value not indexed with deductions for stadium demolition and other expenses is $86.2 million.

That puts SDSU and the city $18 million apart.

The official language of Measure G, the SDSU West ballot initiative, says while the city may make adjustments and deductions to the final sale price, the fair market value must be based on the 2017 appraisal.

“The measure requires the sale price to be based on fair market value as of October 2017, but the price could be adjusted to account for stadium demolition costs, environmental requirements, the cost to develop a river park, and other factors,” according to the full text of Measure G.

The Mission Valley site is essential for the SDSU West project that will build a 35,000 seat stadium primarily for SDSU football, the River Park, hike and bike trails and educational facilities that could add a projected 15,000 full-time equivalent students to the university’s population.

De la Torre said the enrollment plan to add 15,000 students would take place over a 15-year period, but the development plan currently in place prioritizes the construction of the stadium and River Park in an initial phase.

The university will then develop roughly 4,600 residential units, with a campus innovation district to follow over a 10-year span.

De la Torre also said SDSU would coordinate with departments on how best to expand its enrollment figures through a new enrollment management plan that accounts for both the short- and long-term needs of the university.

While private development partners are part of the university’s Mission Valley vision, McCarron said SDSU was far from announcing any partnerships. He stressed the university has been doing its homework.

“We’re studying models nationally, and I think we have a good sense of where we want to go,” McCarron said in the conference call. 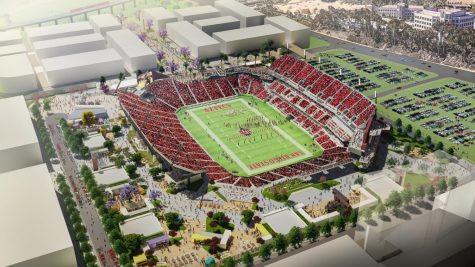 An aerial rendering of SDSU’s proposed multi-use stadium at the site of its Mission Valley expansion.

But the stadium remains the university’s focus as it seeks a resolution with the city over the sale and transfer of the parcel.

SDSU hopes to complete stadium construction in time for the 2022 football season.

The year marks SDSU’s 125th anniversary, and the Aztecs will host a Pac 12 Conference opponent, the University of Arizona Wildcats, to start the season.

In addition to a debt financing plan with the CSU system, McCarron said the university would finance stadium construction costs through a combination of philanthropic donations, a stadium naming rights deal, seat licenses for season tickets and sponsorships.