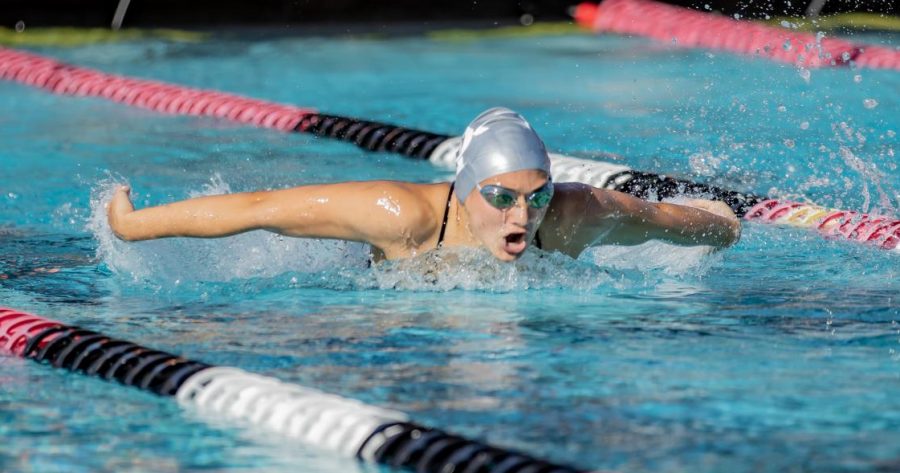 by Brandon Freed and Devin Whatley

Mike Shrader, the reigning Mountain West Swimming Coach of the Year, said he enjoyed his players’ energy at the pool.

“It’s a privilege to work with fabulous young ladies,” he said. They are like sisters and like family. They’re a really close team and we had a lot of fun today, they were dancing around, singing, having fun and being very relaxed, which translated to a lot of good results.”

One swimmer to emerge from the results was junior Klara Thormalm, who won both breaststroke races.

Shrader said Thormalm’s best performance was in the 200-meter breaststroke when she recorded a season-best time of 2:14.79.

“(The) 200 meter breaststroke was my favorite swim she had today,” Shrader said. “She seemed very relaxed, and her time was about the same time as last week.”

The Vetlanda, Sweden native said she was proud of her performance considering how early it is in the season.

“(The 200 meter breaststroke time) was about three seconds off my personal best, and that’s a good time for right now just starting the season,” Thormalm said.

On the diving side, sophomore Ximena Lechuga won the 1-meter title with a season-high 302.30 points.

Lechuga,  the defending MWC Diver of the Year, said she strives to be persistent as the season progresses.

“I can improve on my hurdles mostly and be more (consistent) entering practices,” she said.

Friday was SDSU’s first meet at the Aztec Aquaplex this season.

Thormalm said it was exciting to play at home in front of the Scarlet and Black crowd.

“It’s always fun to compete at home and there was a lot of supporters and cheering today, so it was really fun to compete in front of the fans,” she said.

The Aztec divers will head to the Northern Arizona Diving Invitational from Nov. 15 to 17, and the swimmers will participate at the Mizzou Invitational in Columbia, Mo. from Nov. 20 to 22.

Shrader said despite the separation of meets, it will prepare the squad for MWC competition in the spring.

“We’ll be a little bit apart, come back and have more meets apart,” Shrader said. “Then get ready for conference in second semester.”