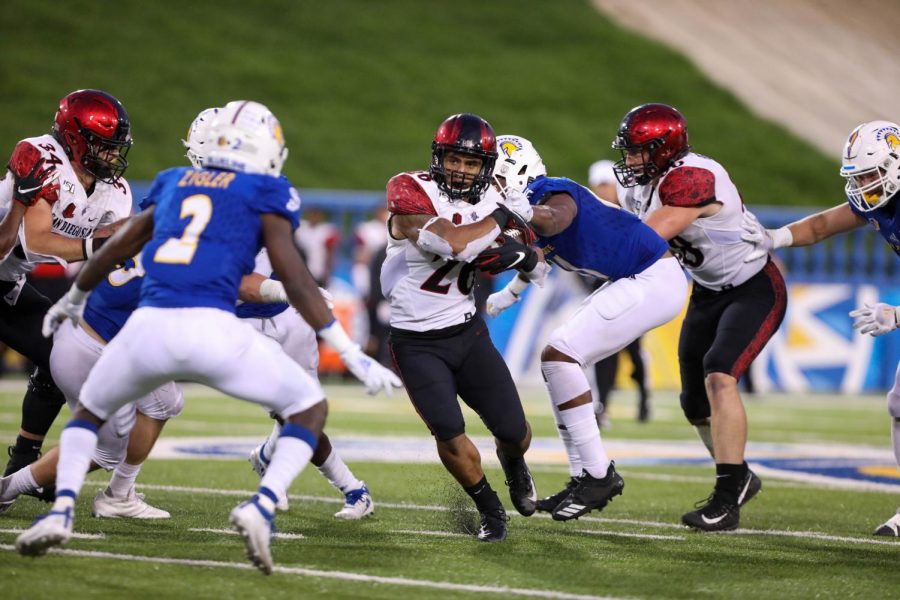 Sophomore running back Kaegun Williams runs through the Spartan defense during the Aztecs' 27-17 victory over San José State on Oct. 19 at CEFCU Stadium. Williams returned the opening kickoff for a 95-yard touchdown.

That was the last time an Aztec returned a kickoff for a touchdown.

Two years later, sophomore running back Kaegun Williams brought back the opening kickoff for 95 yards. Despite the two-year hiatus, the Aztecs have returned the most kickoffs (11) for touchdowns in the FBS since 2015.

“All your hard work paying off,” Williams said of his first career touchdown.

Fitting the kickoff return was by an Aztec running back.

“It’s real special,” Washington said of the younger backups. “Especially when I was here when they were younger, just seeing them develop into the running backs they are today, it’s a really good feeling.”

The production from the Aztec backfield – whether on offense or special teams – was responsible for all three touchdowns during the Aztecs’ 27-17 victory over San José State on Saturday, Oct. 19 at CEFCU Stadium.

“We got a lot of guys in our position that can go out there and make plays. That’s just our goal every week,” Washington said who ran for a touchdown and 78 yards on 16 carries.

Add junior running back Chase Jasmin to the party.

Jasmin had a 50-yard burst to give SDSU the 27-10 lead at the end of the third quarter. The run was the Aztecs’ longest play from scrimmage this season.

“I don’t know what the stat is, but any time we rush over 200 yards, we seem to win at a very high rate,” Long said. “So our offense did a nice job running the ball.”

At six wins, SDSU now becomes bowl eligible for the tenth straight year – a feat that only teams such as Alabama, Georgia, Oklahoma and MWC opponent Boise State have accomplished.

With Stanford going through a down year at 3-4, the Cardinal are in danger of missing out on bowl eligibility for the first time since 2008. If Stanford does not become bowl eligible this season, the Aztecs will be the only California school with such streak.

Coming into Saturday, the Aztecs were expecting a whole lot of pass attempts from Spartans senior quarterback Josh Love who came in averaging over 300 passing yards a game along with 10 touchdown passes.

Indeed, the Aztecs saw a bunch of pass attempts.

But they also saw a bunch of incompletions as well, thanks to the defensive effort put on against Love.

Long said the defense was able to force Love in having a subpar performance.

“Except for a couple really long passes they completed, I thought we kept them under control,” Long said. “We kept him below his completion percentage rate. We intercepted a pass at the end. He’s only thrown two (on the season).”

SDSU’s defense has given up an average of 13.7 points per game, which is good enough to be ranked ninth out of 130 FBS teams in the country. 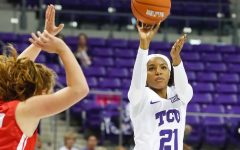 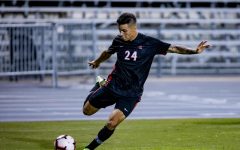 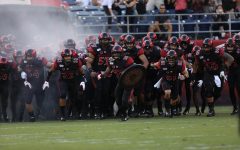 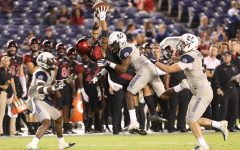 Column: It’ll be different without fans this coming football season, but the safety of student-athletes, coaches is paramount 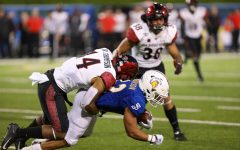