Review: Black Market Brewing stands out from other microbreweries 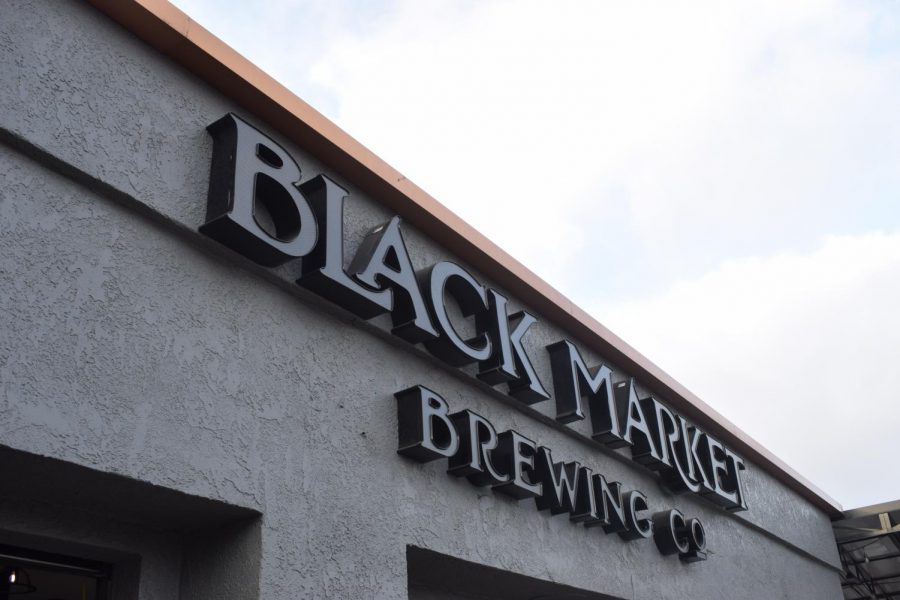 Sitting on the corner of Art Street and El Cajon Blvd, Black Market Brewing Co. stands out as one of the few local microbreweries within walking distance of San Diego State.

The microbrewery boasts a drink menu featuring over 15 different beer taps, all locally brewed by the company. Ranging from light, pale lagers to dark stouts, Black Market Brewing Co. has every style of beer covered.

One delicious brew they have on tap is their Great White Buffalo, a white coffee stout brewed and blended perfectly with vanilla and fresh Guatemalan coffee. For a stout, this brew is on the lighter end in terms of color and appearance due to the notes of vanilla. Nevertheless, the Great White Buffalo is a fantastic brew that smells and tastes just like white coffee, made to satisfy coffee and stout lovers alike.

Another fantastic brew offered by Black Market Brewing Co. is the Shakedown, dubbed as a west coast style brown ale. With notes of chocolate, coffee, toffee and caramel, it’s clear to see why this brew won numerous awards and competitions. The Shakedown boasts silver medals in both the Los Angeles and San Diego International Beer Festivals in 2018 and 2010, respectively. The chocolate and caramel hints of this drink makes it a delightful spin on traditional brown ale flavors.

Besides an impressive list of brews, the restaurant also serves a plethora of delicious oven-baked pizzas. They even offer an option to build your own pizza and a variety of small bites such as pretzels, nachos, salads and wings.

One of their oven-baked pizzas that’s a must try is the Capone which includes ricotta, fresh basil and sliced meatballs. The cheesiness from the ricotta matched with the meatballs makes this a satisfying pie to pair any of their brews with.

The locally owned and operated company first started brewing in a large garage in 2009, according to its website. Their commitment to making high-quality brews later led them the opportunity to open their first location in Temecula.

Their success as one of Temecula’s first microbreweries made way for them to have their beers on shelves and establishments found throughout Southern California, Arizona and Washington. With the success of their Temecula establishment, the company was able to open up a new location right here by SDSU.

The SDSU location first opened up in the summer of 2019 and features a spacious interior with a large bar that’s equipped with all of their microbrews on tap. The establishment also has a gorgeous outdoor patio space with complete with Cornhole game boards. While eating outside, you may find yourself surrounded by friendly dogs as the patio is a popular, dog-friendly spot.

Unlike other breweries, Black Market Brewery Co. provides a variety of traditional beers brewed with a unique twist. Take one of their blonde ales called Deception as an example, which is brewed with coconut and lime. The use of these two ingredients sets Deception’s unique flavor profile apart from how a traditional blonde ale taste. It’s a shining example of how the brewery takes a traditional style of beer and put its own personal touch to it to help make their craft beers stand out.

Overall, Black Market Brewery Co. is a fantastic spot tucked away in the College Area to try out some of the finest local microbrews San Diego has to offer. They’re located at 4800 Art St. and are open Sunday to Thursday from 11 a.m. to 10 p.m. and Friday to Saturday from 11 a.m. to 12 a.m.