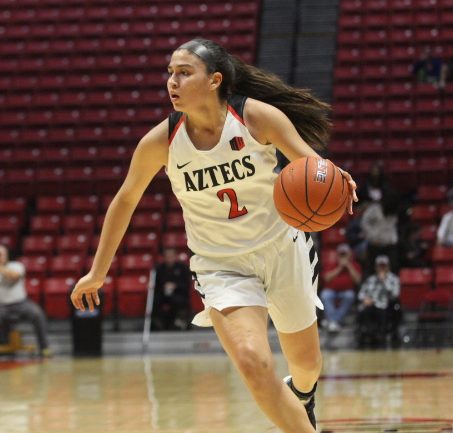 Then-freshman guard Sophia Ramos looks to drive the ball down the lane in the Aztecs’ 87-81 loss to Fresno State last season on Jan. 23 at Viejas Arena.

After making a splash across the Mountain West Conference as a freshman, San Diego State women’s basketball sophomore guard Sophia Ramos is eager to reach new heights this season.

Her contributions were not only the best on the team but also among freshmen players in the entire conference.

Ramos was the first Aztec since 2007 to lead in both points and assists.

In 32 games last year, she had 27 separate instances where she recorded double-digit points.

Terry said despite not overwhelming opponents with hops and blazing speed, Ramos finds a way to be successful.

“She has a quiet strength and a high basketball IQ,” Terry said. “She has mastered getting to her spot and doing whatever it takes to get to where she wants to go.”

Even after having a player’s ideal start to their collegiate career, Ramos is constantly looking for ways to improve.

“I’m still trying to figure out ways to throw teams off,” Ramos said. “I’m looking to expand my game without having to change who I am as a player.”

Ramos played a large part in the Aztecs’ run at the Mountain West Championships in Las Vegas last season.

The Aztecs came into the tournament as a No. 7 seed and defeated No. 10 Air Force in the first round. They followed it up with an upset win against No. 2 New Mexico.

SDSU reached the semifinals but fell short following a 75-70 overtime loss to No. 3 Wyoming.

Ramos scored 50 points (16.6 points per game) and dished out 10 assists (3.3 assists per game)  across three games in the tournament which landed her a spot on the Mountain West All-Tournament Team – the only freshman and underclassman to do so.

“We had a lot of fun last year,” Ramos said. “It was cool to shock and upset some of the teams. A lot of great memories were made.”

Ramos’ highlight game this past season was against CSU Northridge on Dec. 9, 2018 when she scored a career-high 28 points while sinking in seven 3-pointers, including six in the fourth quarter alone. Her seven 3-pointers tied for second most in program history. She became the first Aztec to hit six 3-pointers in a quarter.

Ramos’ efficiency on offense led to 446 points and 144 assists tallied overall this past season – the most points and assists as a freshman for the Scarlet and Black since 1992.

“Last year, I didn’t go in with that expectation for myself at all,” Ramos said. “Now that teams are able to see what I can do, it’s time for me to work on the things that make me successful.”

Ramos is expected to make her season debut when the Aztecs begin their regular season on the road against Hawaii on Nov. 5.