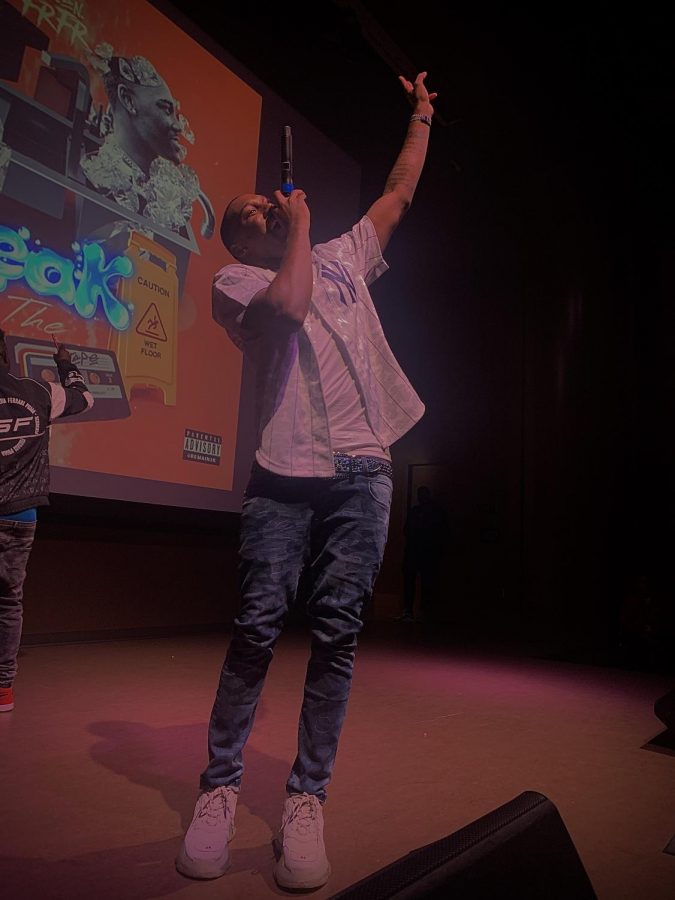 Kalan.FrFr performs in the Aztec Student Union at SDSU on Oct. 29.

Trading in cleats for a mic and a beat.

The SDSU alum returned with a thrilling performance and shared his own personal struggles with navigating and breaking into the music industry.

Originally from Los Angeles, before he was known as Kalan.FrFr, Kalan was walking the same hallways as students do now while playing defensive back for SDSU. The rapper admits during his time at SDSU he struggled to commit to either football or music, often stretching himself thin to perform shows back in LA and make it back to San Diego in time for practice.

“I’ve always been in love with music since I was a little kid, I always played instruments and stuff,” Kalan said. “I was always split between football and music my entire life and I had to pick which one I loved more.”

But he described the struggle to get people to listen to his music as less than glamorous.

“With everyone wanting to be a rapper it’s hard to get people to listen to your stuff,” Kalan said. “If you’re good at what you do and keep pushing, your time will come.”

Last year, Kalan dropped two projects, “TwoFr” and “Hurt.” Both projects have rose in popularity and given the rapper plenty of momentum and exposure. Kalan teased about upcoming music with fans, telling them about the remix of his most popular song “Right Wit It” with a feature from YG.

With his energetic and charming personality, it is easy to see why so many people enjoy his music. Kalan.FrFr has a dedicated fanbase, with everyone in the theater dancing and shouting out the lyrics.

Business junior Savannah Richardson is one of Kalan.FrFr’s fans. She said she found his lyrics enticing,

“I’ve been a fan of his music for a long time,” Richardson said. ‘‘His flirtatious lyrics and beats were what drew me in. It’s cool to see someone from our school make it big”

Freshman and Associated Students photographer Jano Paredes said he was happy to learn about Kalan at the event.

“His energy was amazing, I hadn’t heard of his music until I found out about the event,” Paredes said. “Seeing him perform live was a really cool experience. He is a really down-to-earth guy and treated everyone here with so much respect.”

Kalan.FrFr’s infectious energy showed in his performance. With each song, attendees could see the passion he has and how he treats a small intimate show with the same charisma as selling out a bigger venue. The room’s energy was very carefree, with people dancing and singing along.

Students enjoyed the music, giving Kalan the same feel-good energy he had on stage. The rapper’s set was cut short due to the fire alarm going off,  but after a couple of minutes, the rapper got back “Right Wit It,” and went back on to give the students a show they would not forget.