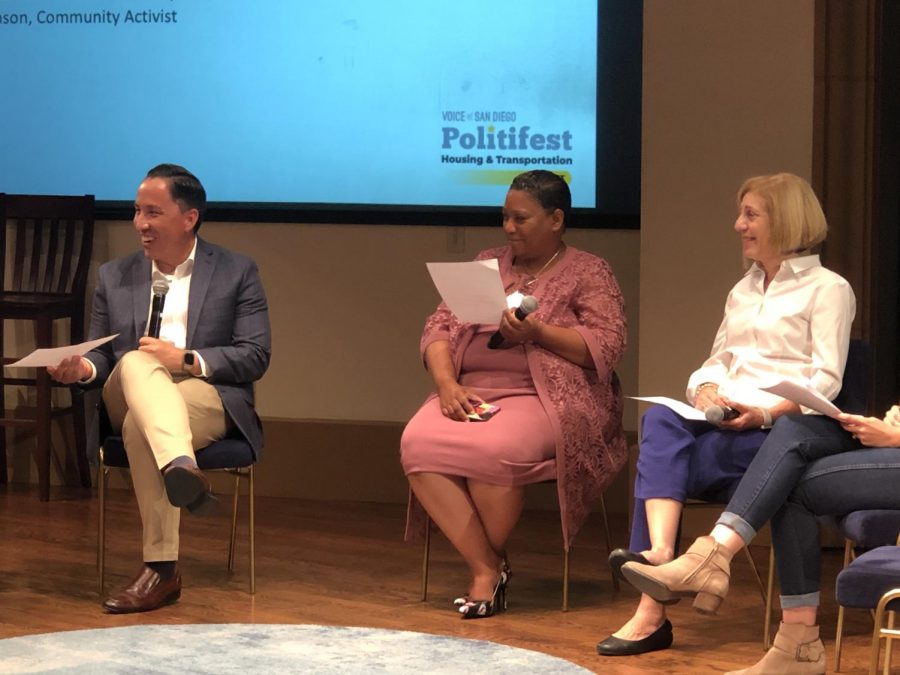 (Left to right) Todd Gloria, Tasha Williamson and Barbara Bry sit alongside one another during a mayoral debate hosted by Voice of San Diego on Oct. 26 at the University of San Diego.

Three local Democrats are running to fill the seat of San Diego Mayor in 2020. On Oct. 26, the public got a taste of the campaign season in a mayoral debate at Politifest, an annual summit on local government hosted by Voice of San Diego.

The audience was able to hear the candidates discuss some of the most important issues relating to housing and transportation, some of which will directly affect students at San Diego State.

Barbara Bry is the President Pro Tempore of the San Diego City Council. She has the most strict stance on e-scooters out of the group, rejecting their presence completely. San Diego State banned its use of these devices at the start of the semester down to just eight parking stations adjacent to campus. She blamed Gloria, another mayoral candidate, for co-writing a state bill that gives scooters the same traffic rules as bicycles, exempting adults from wearing helmets.

She said she called for a temporary ban on the devices when they first hit the market but neither the mayor’s office nor her colleagues would agree to the proposal.

“We are forbidden in the city of San Diego or any city from requiring a helmet,” Bry said. “The state took away that power from us.”

Bry continued to make it clear that she thinks scooters do more harm than good.

“They are disproportionately used between 4 p.m. and midnight,” Bry said, adding that most of the late-night uses were from drunk people. “They are not bicycles … They are flimsy electronic devices made in China.”

Todd Gloria is a California Assemblymember and the House Majority Whip. He defended his stance on the issue, saying the industry benefited from operating in San Diego.

Community activist Tasha Williamson said whenever we open the door for a new business, there needs to be some regulation. She then shifted the entire debate angle and said if the city is proposing scooter regulation, we need to have some control over the officers we send to enforce these rules.

“We are sending our police officers to do things they are not trained to do,” she said. “And they treat people sometimes with less dignity. You have the officers and rogue officers and nobody is regulating them either.”

Bry then agreed there are issues that need to be addressed but said there are different problems from community to community.

“What doesn’t get enforced varies from community to community,” Bry said. “In one community it’s drugs and prostitution. In the beach areas, it’s short-term vacation rentals that don’t get enforced.”

Williamson did not think of excluding an issue with drugs and prostitution just to one area of the city.

“Drugs and prostitution are throughout this county,” Williamson said. “I’m just trying to protect my community like you do yours.”

Bry said policies that provide housing to the homeless before healthcare and financial assistance alone would not solve one of the city’s most paramount issues, though both Bry’s opponents, Gloria and Williamson, support a housing-first initiative. Bry said in her research, it was actually drug abuse and mental health that needs to be combated in the homeless community.

However, Lewis said Bry told the San Diego Union-Tribune she supported a housing-first approach in 2016.

Bry said she learned if the focus isn’t put on mental health and drug abuse problems then the city won’t be able to crack down on chronic homelessness.

Gloria said homelessness is the biggest issue in the city.

“What we are doing is clearly not working,” Gloria said. “We are buying bankrupt indoor skydiving facilities and turning them into homeless facilities that house nobody. And we do it for no appraisal.”

“I hear people from different councils and committees talking about ‘those people’ when we talk about homeless individuals,” she said. “‘Those people’ are community members just like everyone sitting in this room.”

The proposal has not yet been finalized by the MTS board, but that didn’t stop the candidates from taking positions.

Gloria supported the proposition and said it would lead to more trolleys and frequent routes.

Williamson said she supports it but made her reservations clear. For one, she would like to see parallel trolley lines to freeways, rather than increasing bus traffic in those areas.

Williamson also said those in charge of the funds have to be checked to make sure they are spending the money for its implied use.

Bry said she does not support the measure as it stands. The founding editor and former CEO of Voice of San Diego made it clear many times throughout the debate that she remains a journalist at heart.

“I like to read things before I support them,” she said.

Bry said the MTS board has yet to finalize their proposal, and that local government must finish the blue line trolley before gaining full support from its constituents.

According to a September survey conducted by the San Diego Union-Tribune and ABC10, almost half of San Diego citizens are undecided. Todd Gloria has the lead with 31% to Bry’s 15%. Tasha Williamson is holding at around 8%.