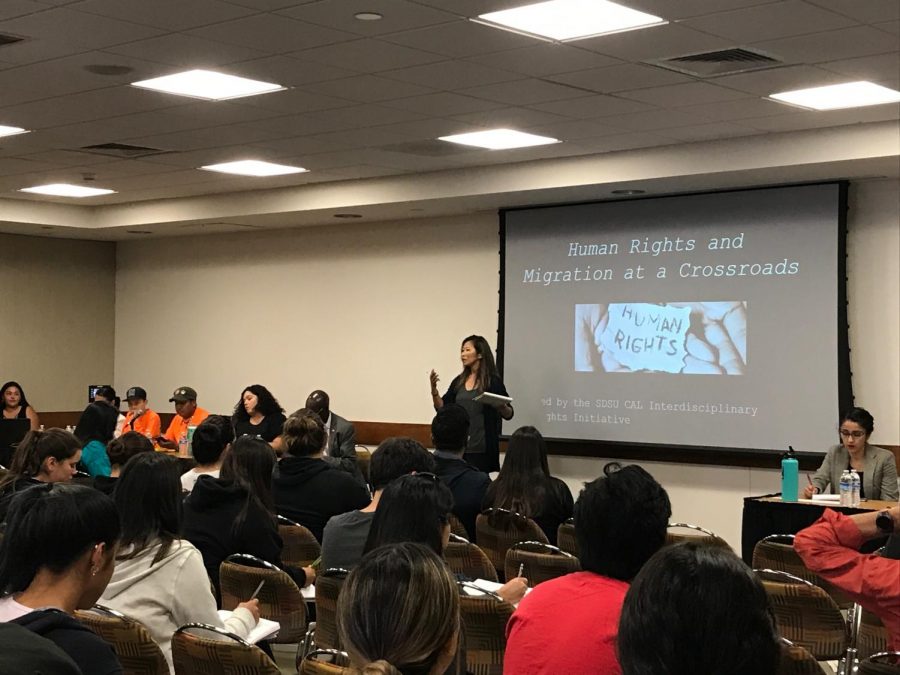 Various organizations came together on Oct. 29 to discuss refugee and migration policies.

Director of Interdisciplinary Human Rights Initiative Grace Cheng and associate professor of Chicana and Chicano studies Roberto Hernández organized the event in the hopes of raising awareness of the humanitarian crisis on immigrants in detention centers along the U.S.-Mexico border.

Hernández said it is necessary for the university to focus on these issues due to the close proximity of the border.

“Especially here being so close to the border, these are pressing issues that sometimes San Diego State is so removed and disconnected from,” he said. “So, we think it’s imperative … to address these issues that are happening just 15 miles south.”

Jennifer Gonzalez, cofounder of grassroots organization Detainee Allies, said the Trump administration’s introduction of the family separation policy, which separates children from their parents at the border, became the turning point for many citizens to address and raise concerns over the lack of proper treatment towards immigrants seeking asylum.

“When the family separation policy became public knowledge, there was a lot of collective outcry,” Gonzalez said. “It was a tipping point for a lot of folks that had not been paying attention to this issue.”

Ivan Mercado, case manager of Al Otro Lado, a binational legal services organization serving assistance to refugees and deportees, said the lack of humane treatment towards immigrants in these detention centers is horrific, especially when considering the conditions that forced them to seek refuge.

“It’s sad because these are challenges that we are facing (where) they came and left everything they had just to seek safety,” he said. “But now, unfortunately they are just going back again into the same problems. There have been reports of sexual assault and a lack of medical attention (inside detention centers). The lack of humanity is horrible.”

Nursing freshman Aliyah Israel, who attended the event, said despite going for an extra credit opportunity, she found the event to be an illuminating experience.

“Personally we came here for a sociology class, but I feel like its really informative,” Israel said. “It brought a lot of attention to a lot of the things we didn’t necessarily know about.”

“In high school, no one would ever talk about this,” Bryant said. “So bringing awareness to this subject actually lets me know there’s people worrying about this issue which is enlightening.”

Gonzalez said it is important for people to empathize with immigrants and to spread the word of the improper treatment towards them by these migrant detention centers.

“We don’t just need your clicks and your likes,” he said. “We don’t even just need your bodies in the seats right here. We actually need your hands and hearts. We have to find ways to fight in a way that protects and lifts the advocates and those that are being directly affected.”