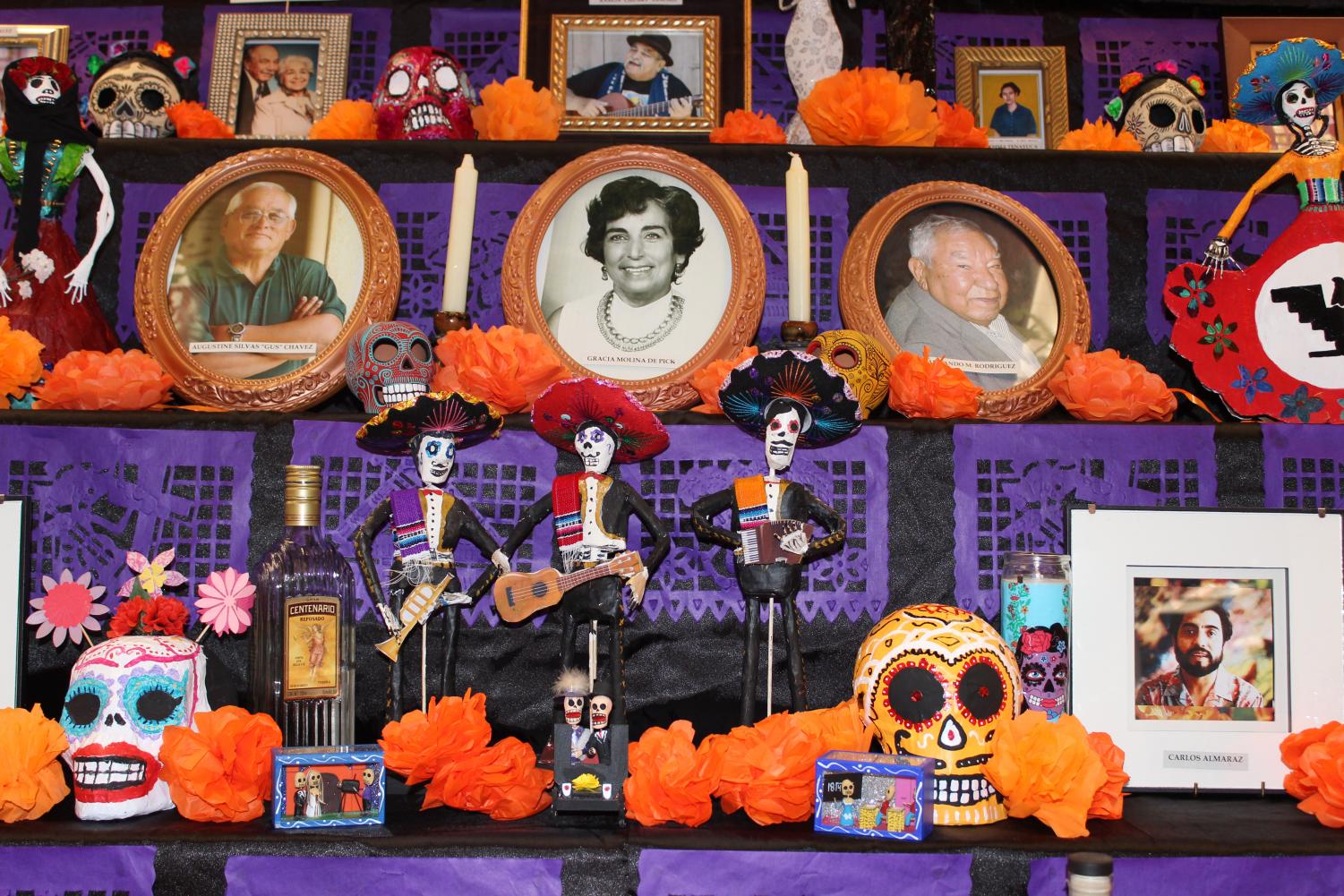 The alter honored many activists.

Day of the Dead takes on political issues

Día de Muertos, or Day of the Dead, is a Mexican tradition that spans from Nov. 1 to 2 every year.  It is a time to remember loved ones who have passed away.

On Nov. 1, the room was filled with not only students and faculty, but also alumni, family members and Chicano/a activists who came to honor those whose photos were put up the altar.

Every year the department creates a theme, and this year the altar is dedicated to the activist leaders, faculty and students who have helped form the Department of Chicano and Chicana Studies over the last 50 years.

The altar also pays tribute to the Central Americans and Mexicans who lost their lives migrating to the U.S.

Professor Norma Iglesias-Prieto and her students assembled the altar to honor the dead and to make a political statement. They named the commemoration, “Those Who Have Came Before: Stolen and Offered Lives.”

“Something that is affecting our community today are the kids who have been separated from their families, who are in cages and that some have died in the hands of immigration authorities,” Iglesias-Prieto said. “So we don’t want to lose this opportunity to remember those children who have died and are linked to our hearts.”

The altar was made for the community to learn more about more than just the cultural side of this tradition. The Department of Chicano and Chicana Studies wants those who attend the commemoration and visit the altar to learn about those who have lost their lives fighting for Chicano/a community.

“It is more than just a tradition, it is about the people we are honoring,” Iglesias-Prieto said. “We want people to remember their legacy and to know that the lifestyle we have today is thanks to those who fight for us before.”

The altar has been Iglesias-Prieto’s tradition for the last 15 years, and this is the first year it has been held in the Love Library, making it the biggest it has ever been to celebrate the 50th anniversary of the Department of Chicano and Chicana Studies at SDSU.

Iglesias-Prieto said it took her, her students and 30 volunteers over 1,000 hours to make this altar possible.

Grandmothers and mothers of the students and department faculty formed part of the volunteers who helped create the items on the ofrenda (altar), making it more than just a school project, but giving it a family feel as well.

Every item on the ofrenda was handmade and has been in the making since May 2019.

Each of the altar’s seven colorful steps have traditional foods, marigolds, candles and several other items to offer to those who have been put on the ofrenda.

The altar has the photos of 27 Chicano activists, leaders and educators. The Chicano department also wanted to commemorate the lives of five children who have died in the hands of immigration authorities.

Chicano and Chicana studies senior Mónica Van Deerlin Murillois, one of the students who worked on this project for the last seven months, said it was more than just an experience of  cultural and indigenous significance. She said it was to bring awareness to the several children who have died caged up in Immigration and Customs Enforcement detention centers.

Chicano and Chicana studies senior Ana Miguel is one of eight students who worked countless hours on campus and in Iglesias-Prieto’s garage to make the altar. She said it is important to know there is a political meaning to this altar and hopes that the audience leaves with more awareness of what is happening in the Chicano/a community today.

“I feel like a lot of people are coming in just thinking it is pretty, but it is more than that,” Miguel said.” There is a history behind Día de los Muertos and it’s not just full of color. It is where we connect with our ancestors, it is where they come back to us and we are also recognizing the Chicano activists for the work that they did.”

The community was received with live music by La Rondalla Amerindia de Aztlán, a band formed by former professors and alumni of SDSU, a music performance by department Professor Coral Mcfarland Thuet, speeches from professors of the department and traditional Pan de Muerto, Bread of the Dead, with coffee.

The altar includes handmade biography books to explain who is on the ofrenda, and will be open to the public until Nov. 15.

“The Day of the Dead is a personal but also a community celebration, so the other goal of our celebration is to help form a community,” Iglesias-Prieto said. “We need to be together, especially in difficult times.”