Baseball switches from uniforms to costumes in annual Halloween game 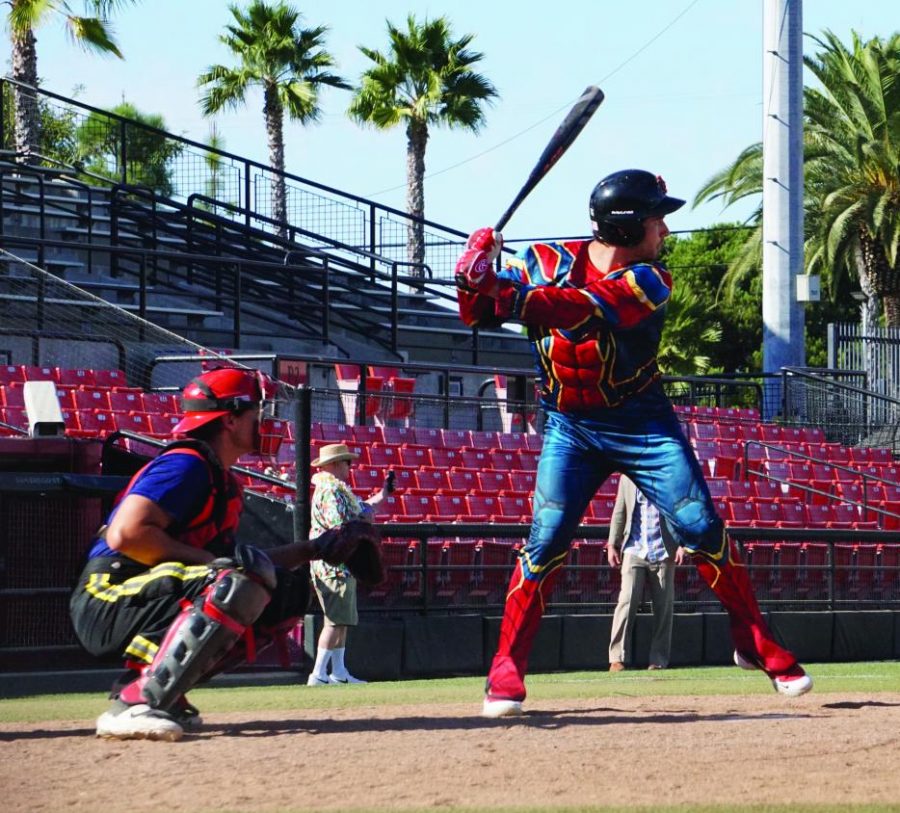 Freshman pitcher Johnny Guzman prepares to face a pitch during the Aztecs’ annual Halloween game on Nov. 2 at Tony Gwynn Stadium while dressed as Spider-Man.

by Daniel Guerrero and Luis Lopez

It was a perfect afternoon for San Diego State baseball at Tony Gwynn Stadium on Nov. 2.

Players are positioned out on the field, and now stepping up to the plate is none other than … Spider-Man?

No, rather it’s freshman pitcher Johnny Guzman dressed as the iconic webslinger during the Aztecs’ annual Halloween game.

What may seem like an oddity for a baseball game comes with a greater meaning as the Aztecs swap their traditional Scarlet and Black jerseys for Halloween costumes in an event to support the Down Syndrome Association, Dads Appreciating Down Syndrome and Best Buddies.

The annual Halloween game was originally created as an offseason activity for the team but has now become a way to give back to the greater San Diego community.

SDSU was one of the first baseball programs to create such an event, which even garnered attention from the MLB.

Head coach Mark Martinez, who wore a military-themed costume, said the event is a great way for the team to let loose before the season begins.

“That’s the whole idea of it: to break up the fall and let our hair down, check our egos at the door and just have some fun playing baseball,” Martinez said. “Partnering with the Down syndrome (organizations) has just been so humbling and a great experience for us. It’s been a great marriage with the DSA.”

Prior to the Aztecs’ costumed intersquad game, SDSU hosted the Challenger game which allowed kids from the organizations to share the field with the players.

Sophomore pitcher Michael Paredes, who dressed as the Zohan from Adam Sandler’s “You don’t mess with the Zohan,” said the event helped the team bond and give back.

“It’s a good time for us to get together,” Paredes said. “It means a lot that we have the Challenger league come out with us. It’s definitely a blast and we all have a good time.”

One of the annual traditions includes playing out of their usual positions.

Eden said playing out of position gave him a chance to play in different manner than he’s used to.

“It was kind of scary,” Eden said. “I missed (a) fly ball. It was cool, but I didn’t have to be so serious like I am on the mound and I’m actually hurt that I made an error today.”

Since its origin, the Halloween game has become a tradition for the program. Junior outfielder Matt Rudick, who wore a “Baby Shark” costume, said the event gives the Aztecs a break from their offseason training program.

“San Diego State was one of the first ones to do this event,” Rudick said. “It gets everyone together and we have a really good time. It’s an event where we can dress up and have some fun on the ball field.”

Daniel Guerrero is a senior and Luis Lopez is a junior – both are studying journalism. Follow them on Twitter @TheDanGuerrero and @Lopez509Luis.