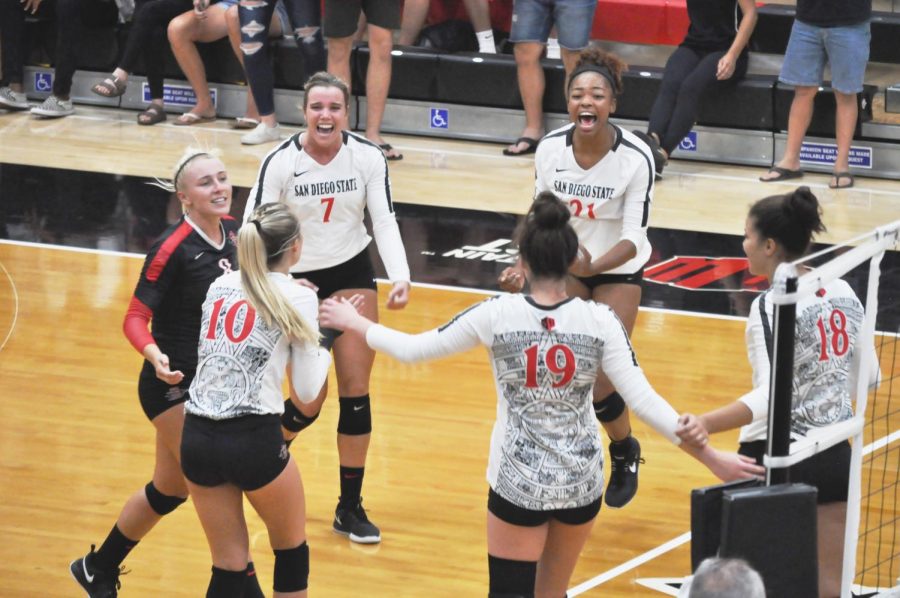 Senior outside hitter Hannah Turnlund (7) and sophomore outside hitter (21) celebrate an Aztec point during the Aztecs' 3-2 comeback victory over West Virginia on Sept. 6 at Peterson Gym.

First, they had a three-game winning streak, one of which was against UNLV last Saturday.

Not only was it SDSU’s second road win of the season, but it stopped a nine-match winning streak for the Rebels that coincidentally started on the Montezuma Mesa a month ago.

SDSU head coach Deitre Collins-Parker said despite the team’s away struggles, the Aztecs were happy to come home 2-0.

“Our road time has been really, really tough for us,” Collins-Parker said. “Just happy to come back home, coming off two matches where we played well against New Mexico and UNLV.”

A difference on the road trip was the defensive emergence of senior outside hitter Hannah Turnlund, who tied her career-high with 21 digs along with 16 kills to record her sixth double-double of the season.

Despite some recent scuffles, Collins-Parker said she wants Turnlund to fight through them.

“For her, we had been taking her in and out when she struggled with passing,” Collins-Parker said. “You have to be on the court to play defense and she is staying in for us all the time and she has gotten much better back there.”

The 21 digs was the most since she posted 16 against Florida Gulf Coast on Aug. 31.

Turnlund said getting more digs relates to a change in back-row positioning for the senior outside hitter.

“We switched (Turnlund) from left-back to middle-back and it’s a different way of viewing the game and she is doing a great job,” Collins-Parker said.

Although SDSU lost to Wyoming in three sets, Turnlund has recorded double-doubles in three consecutive matches.

Playing on the opposite side of Turnlund is junior outside hitter Erin Gilchrist.

Gilchrist said the win against the Rebels gave the team motivation heading into the final homestand.

“I think everyone was really confident going in,” Gilchrist said. “It’s really difficult to get wins on the road and UNLV was a good team, so we were very confident. We’re playing good volleyball and we’re back in a good rhythm.”

The three-game winning streak includes the win against UNLV, but also wins at New Mexico on Halloween and against Utah State on Oct. 26 at Peterson Gym.

The third piece of motivation for the Aztecs are the tough opponents they will face this weekend. No. 13 Colorado State and Wyoming (16-8, 11-2 MW) are in first and second place in the conference followed by weekday matches against Fresno State and Air Force, who both swept SDSU last month.

Sophomore middle blocker Andrea Walker, who posted a career-high 12 kills at UNLV, said it is up to any team the Aztecs face, including themselves, to pull out a victory.

“Right now, the ball is in anyone’s court, so it’s very crucial,” Walker said. “Anyone could take it because we’re on equal ground, but we will be ready.”

SDSU faces No. 13 Colorado State on Nov. 9 followed by Fresno State and Air Force on Nov. 12. All three matches are at Peterson Gym.