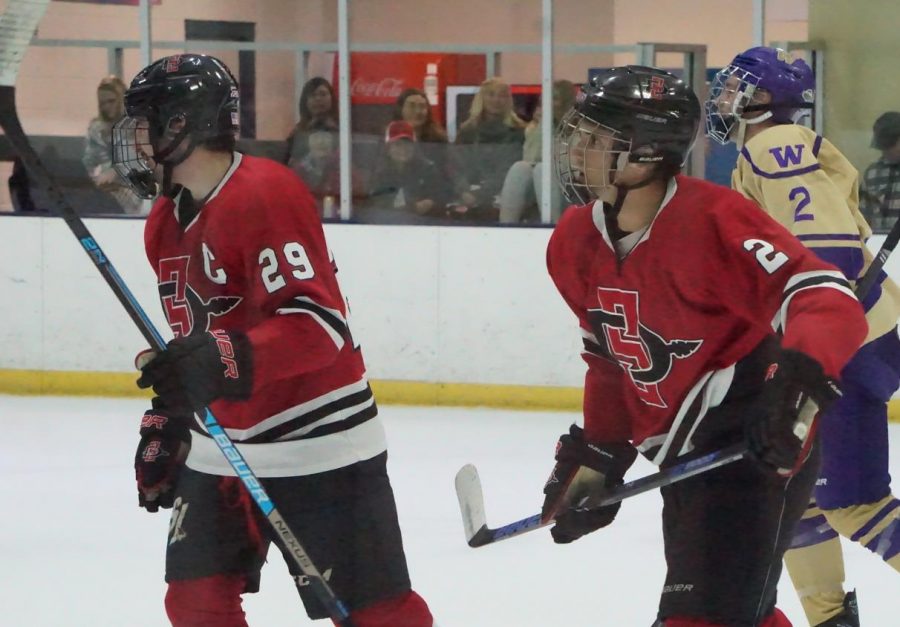 Junior Reece Breuckman (left) skates next to senior Adrien Wisch (right) during a stoppage of play in the Aztecs’ 6-1 win over Washington on Nov. 1 at Joan Kroc Center.

San Diego State hockey was looking to secure a clean sweep over the weekend against PAC-8 teams but was unsuccessful due to a 4-3 loss to Arizona State on Sunday, Nov. 10 at the Joan Kroc Center.

The Aztecs started the weekend off strong with two wins over San José State University in their Friday and Saturday games by final score of 6-1 and 6-3.

However, the Sun Devils came out with a defensive force that the Aztecs ultimately weren’t able to combat.

Both teams came into this game with fatigued legs after playing two games in two days. The Sun Devils were coming off of two games against UCLA.

ASU demonstrated fatigue would not be an issue as forward Jacob Dobrenz speeded up to the net taking a shot to score the Sun Devils’ first goal of the match.

“We came up to a real slow start and gave them a 2-0 lead. That was it at the end of the day,” SDSU head coach Phil Bateman said. “They are a real good team with a lot of bodies you can’t squat a good team like that.”

With 1:20 left in the first period, ASU took a penalty to give the Aztecs a five-on-four advantage. The Aztecs were able to convert on the power-play to put their first point up on the board with a goal from freshman forward Ian Stentz making the score 2-1.

“That was nice good shift of momentum before the first period ended,” Stentz said of the goal.

The Aztecs (14-3-1, PAC-8 Conference) came into the second period with momentum after their goal.

However, the momentum ended when the Aztecs took a penalty.

The Sun Devils took their one-man advantage and scored a power-play goal by defender Cameron Ward to give ASU another two-goal lead.

The Aztecs kept looking to find the back of the net for the remainder of the period but ultimately were unable to maneuver around the defense and goaltending from ASU.

“I think part of what we tend to do is that our guys try and do too much,” Bateman said. “We preach hard work in our zone and creativity. That creativity can’t be selfish creativity.”

That “selfish creativity” led to the Aztecs taking multiple penalties to give the Sun Devils a one-man advantage. ASU was able to score two power-play goals as a result of the Aztecs being one man short.

“We’ve got to get pucks a little deeper, chase them down, or just be smarter with our zone entry,” Bateman said of the Aztecs’ offensive attack.

After an ASU goal by forward Levi Hulston 10 minutes into the third period, the Aztecs were down 4-1 but continued to fight.

Aztecs forward Artem Klein was able to maneuver around ASU defenders to score a goal with 4 minutes remaining in the game.

With 51 seconds remaining in the game and a one-man advantage for the Aztecs, forward Blake Reed took a backhand shot to score a power-play goal making the score 4-3.

Stentz said the coach’s message on the bench motivated the team to attempt a comeback.

“He just said don’t stop skating hard,” Stentz said. “Keep playing like you usually play and don’t give up.”

The Aztecs drove the puck into ASU’s zone fighting hard to tie the game but were unable to do so – resulting in a final score of 4-3.

The Aztecs will begin a road trip to take on their next games against the University of Denver and Wyoming.