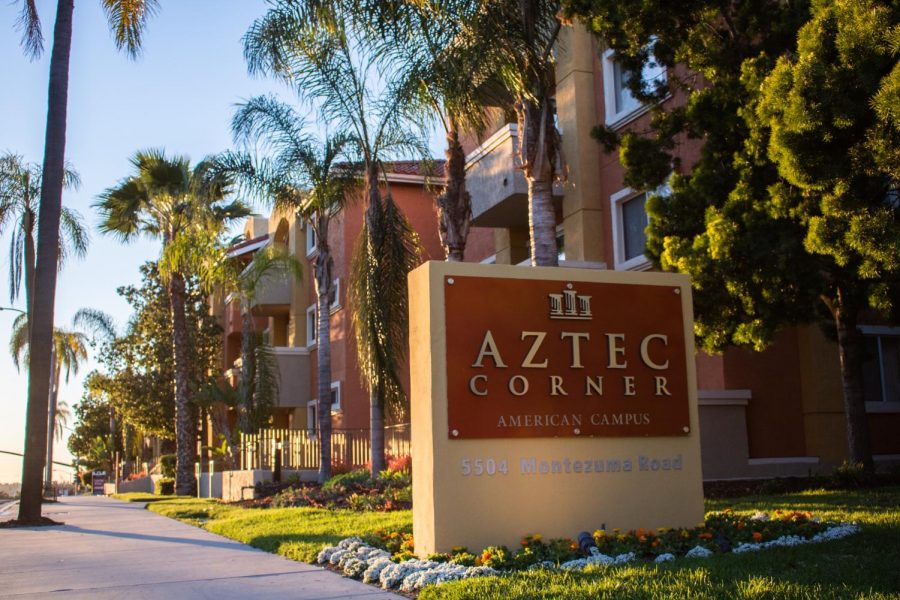 Residents of Aztec Corner have turned to the internet to petition living conditions and long maintenance repair times.

A petition outlining alleged maintenance deficiencies at Aztec Corner began circulating among residents last week and since has garnered over 800 signatures and widespread media attention.

Termite infestations, plumbing problems and poor response times to maintenance requests are some of the grievances cited in the Change.org petition demanding action from San Diego State’s Housing Administration.

“I am demanding that either the monthly rent is lowered or we are reimbursed for some of the rent we pay to live in these downright god awful conditions,” business administration sophomore and creator of the Change.org petition Joe Berniklau wrote.

Birkenlau described a situation where the bar in his closet dislodged from the wall, forcing him and his roommate to move their clothes into the living room. He quickly submitted a service request but was left waiting.

“We waited a week and a half for maintenance to come and fix it,” Beniklau said.

Slow responses to maintenance requests is something that seems to afflict the entire complex.

Sophomore Aztec Corner residents Hanna Bengard, Kalie Slivkoff and Deegan Roecker waited two days for maintenance workers to fix the power outlets in their kitchen when they stopped working. To keep their refrigerator running, they used extension cords to reach outlets located in their living room.

This is a recurring problem, finance sophomore Chase Julicher said. According to Julicher, several people have messaged and sent pictures in their floor GroupMe complaining about the leaks.

“It’s very common for (maintenance) to give you a bucket to put under the A/C,” he said. “People on my floor have filled five to 10 gallons before maintenance got around to their room.”

Many residents are frustrated that maintenance has not offered permanent solutions to the problems that keep coming back.

“They fix it, but they don’t fix it,” Slivkoff said. “They cover up the issue.”

“We’re reviewing service requests as they come in,” Cervantes said. “(Aztec Corner) is seeing them, and we’re seeing them as well, so they keep us updated if there are any long term concerns.”

Cervantes said the standard response time for service requests is 24 hours. Repairs can take longer if parts need to be ordered or the work is split into different phases, but residents will always be notified, she said.

This is the first year of SDSU’s master lease agreement with Aztec Corner. The university signed the agreement in February, which gives them the right to control the building for three years and control students’ leases on the property.

The move was made in response to increased housing demand following the implementation of the Sophomore Success Program this fall.

For an 11.5-month lease, Aztec Corner residents currently pay around $1,139 per person each month for a two-bedroom apartment housing up to four people. The same unit cost between $784 to $824 per person before SDSU took over the leases at the apartment complex.

Cervantes said the rent increase reflects a scheduled rate increase by Aztec Corner, as well as the cost of integrating the university’s residential education programs, which include paid community assistants, front desk attendants and funding for educational programs.

Cervantes said the housing administration has already reached out to residents who signed and commented on the petition in an effort to address their concerns.

“If students feel that their concern is not being addressed, whether it be timely or that it’s recurring, certainly to come speak with us,” Cervantes said. “We would certainly want to have that conversation. It’s always helpful for us when we have  more information to better understand.”