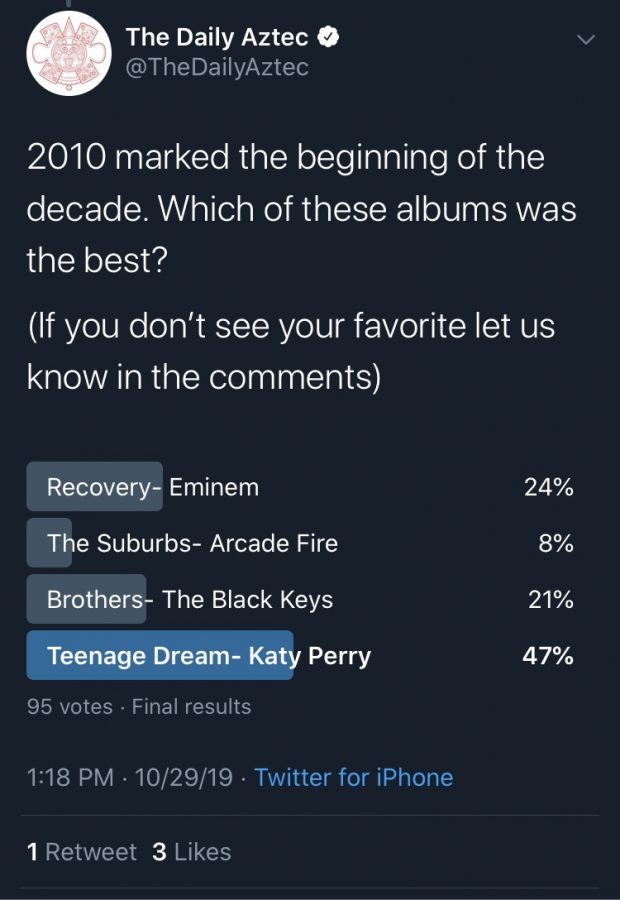 The Daily Aztec twitter posted polls to see what their followers thought about select albums.

To commemorate the end of the decade, The Daily Aztec’s Twitter page has been asking its followers to vote on the best albums of the decade, beginning with 2010 and ending in 2019.

This decade of music was unlike any other as the rise of streaming services such as Spotify and Apple Music coincided with the mainstream arrival of artists such as Adele, Kendrick Lamar, and Lil Nas X. In addition, the rise of social media has made it much easier for artists to promote and sell their music, as well as allowing fans to share their playlists and favorite musicians with their friends.

Thousands of albums have been released over the past decade and The Daily Aztec has picked four albums that have made a significant impact on music and pop culture from each year. Many albums made their mark, but only a certain few continue to hold a special place to this generation of listeners.

Here are the results so far.

Perry’s third studio album “Teenage Dream” combined pop with various rock genres and drew inspiration from Swedish bands such as ABBA and The Cardigans. The album debuted at number one on the US Billboard 200 chart, and has been certified Triple Platinum by the Recording Industry Association of America. The album spawned five number one singles, including “Firework,” “California Gurls,” “Teenage Dream,” “E.T.” and “Last Friday Night (T.G.I.F.).” By accomplishing this feat, Perry became the second artist in Billboard history, after Michael Jackson, to have five number one singles from one album.

Adele’s second studio album “21” chronicles Adele’s emotions following a dramatic breakup, including themes of anger, loneliness, regret and acceptance. The album includes gospel- and Motown-influenced production from producers such as Ryan Tedder along with Adele’s emotionally charged lyrics. “21” broke numerous sales records and became the best-selling album of 2011 and 2012 in the U.S. It also won a Grammy for Album of the Year. It is currently the best selling album of the 21st century with over 30 million copies sold.

Swift’s fourth studio album “Red” is seen as Swift’s official transition from country to pop music because of the increasingly pop sounds that have accompanied her latest works.. “Red” is a pop album that contains rock and country elements, and shows a mature perspective on Swift’s past relationships and heartbreaks. The album contained her first number one single, “We Are Never Getting Back Together,” which has been rumored to be about her ex-boyfriend Jake Gylenhaal. At the time of the album’s release, it had the second highest first-week sales by a female artist ever and is currently the 37th best selling album by a woman ever on the US Billboard 200 chart.

New Zealand singer Lorde released her debut studio album when she was 16. It combined dream pop production with Lorde’s distinct, powerful voice. The album covered various social issues such as the dangers of wealth and fame along with classic pop themes such as romance, anxiety and angst. The album reached number three on the US Billboard 200 albums chart and her lead single “Royals” topped the US Billboard 100 chart for nine consecutive weeks. Besides its commercial success, “Royals” was named one of the best songs of the year by various music sites and named the best song of 2013 by Slant and Consequence of Sound. 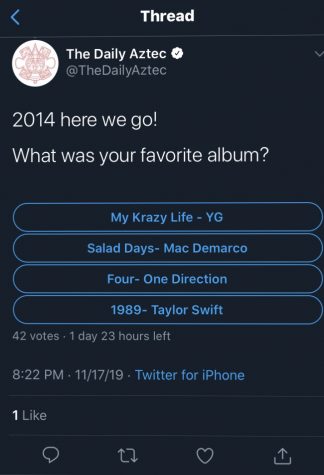 Swift’s fifth studio album “1989” featured synth-pop production from renowned pop producer Max Martin and, like her previous album “Red,”  it focuses on her past relationships and self discovery. Supported by three number one singles including “Shake it Off,” “Blank Space” and the “Bad Blood” remix featuring Kendrick Lamar, the album debuted at number one on the Billboard 200 chart. “Shake it Off” became her biggest Billboard Hot 100 hit to date, staying on the chart for 50 weeks. “1989” went on to win a Grammy for Album of the Year and was named the Best Album of 2014 by Billboard.