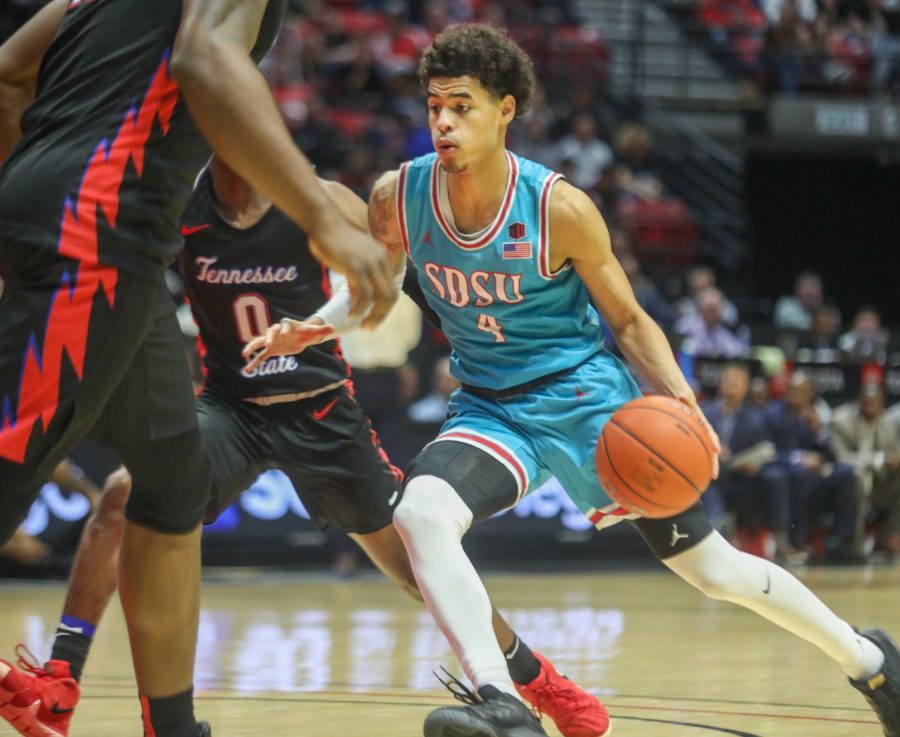 Junior guard Trey Pulliam looks to drive the paint during the Aztecs' 62-49 win over Tennessee State on Nov. 25 at Viejas Arena.

Even though the team won’t get the chance to enjoy a Thanksgiving meal with their families at home, head coach Brian Dutcher said the Aztecs shared a meal last night.

“We’ll celebrate together with the team, have a Thanksgiving meal (Wednesday), and then go to work on Thursday and Friday,” Dutcher said Tuesday.

After the Aztecs (6-0) leave the dinner table, they are tasked to prepare for a high-powered  Bluejays (4-1) offense scoring 78.8 points per game through five games.

“They shoot 41% from 3-point range,” Dutcher said. “(They have) a top-20 offensive ranking in the country, so they’ll present a great defensive challenge for us.”

Both are shooting at least 50% from 3-point range and are also the top scorers on Creighton’s roster, respectively.

SDSU will play the Bluejays immediately following a game between No. 12 Texas Tech and Iowa at 5 p.m. The Aztecs will face either the Red Raiders or Hawkeyes on Friday depending on the result of both games.

In the bigger picture, the Las Vegas Invitational has the potential to affect SDSU’s placement in the NCAA tournament – if it makes it that far.

Since Creighton, Texas Tech and Iowa are among the toughest teams in the Aztecs’ non-conference schedule this year, Dutcher said winning these next two games is essential.

“We’re in search of a quality resume win,” Dutcher said. “Maybe more important to Creighton and us as far as out-of-conference resume, but important to everybody as far as seeding goes if you’re going to be in the (NCAA) tournament.

Junior guard Malachi Flynn said Creighton, Texas Tech and Iowa are among the best teams in the Aztecs’ non-conference schedule this season.

“I think it’ll be the two toughest games we’ve had back to back all year, so I think it’s definitely going to be a big test for us,” Flynn said. “But ones we’re looking forward to. Nobody’s shying down from the challenge or anything like that.”

After facing the University of San Diego, Long Island University and Tennessee State this past week, the Aztecs’ two games in the Invitational will end the team’s stretch of five games in 10 days.

Although SDSU’s schedule might seem grueling this early in the season, junior forward Matt Mitchell said he prefers playing this amount of games.

“When we have practice 10 days and no games, it’s kind of a drag during the season,” Mitchell said. “I just feel like these five games in 10 days are good for us and it’s definitely what we want.”