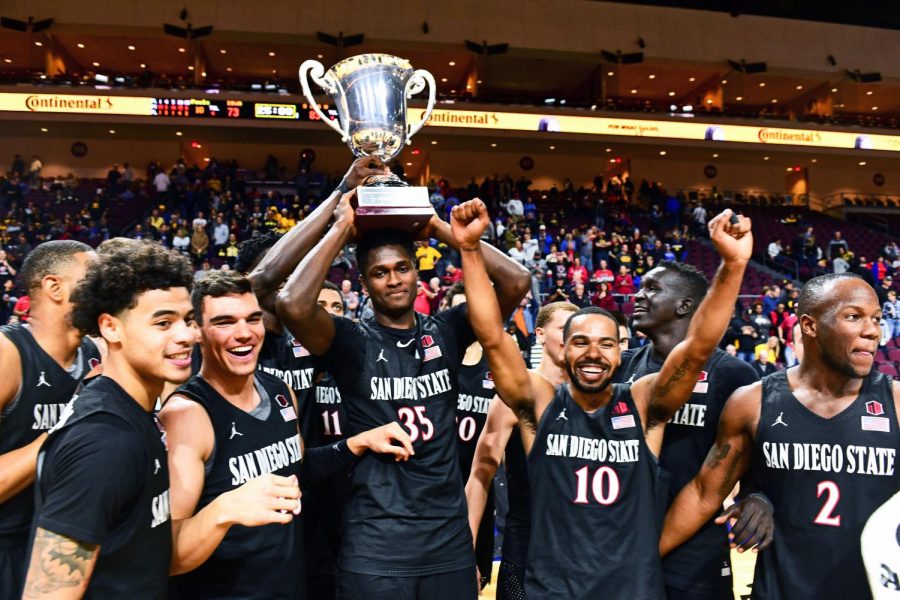 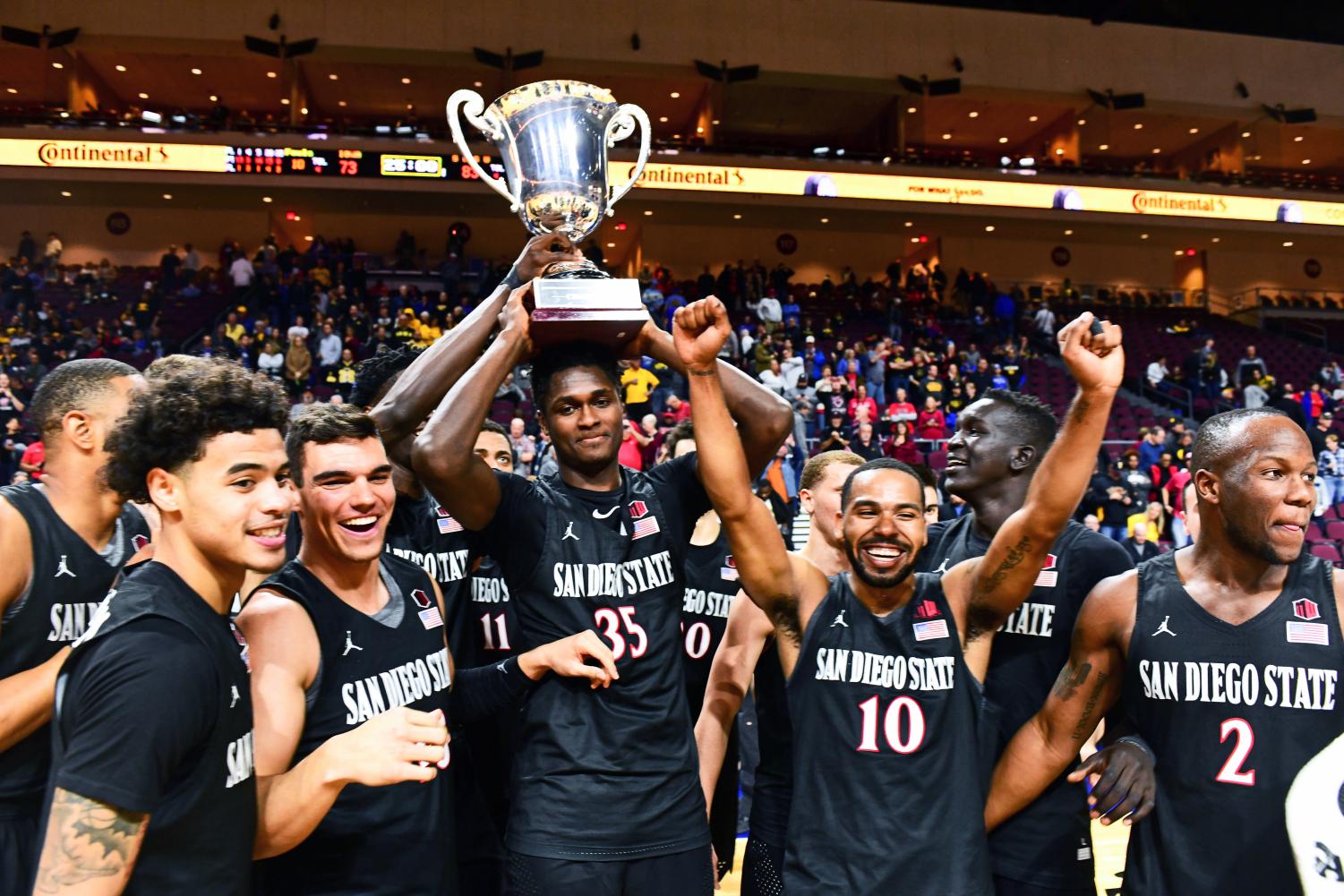 San Diego State men’s basketball hoisted its first trophy of the season with wins over Creighton and Iowa in the Las Vegas Invitational.

The four-game tournament consisted of those three schools and then-No. 12 Texas Tech.

“It’s just a reassurance of how good we think we are,” Mitchell said. “We’re not done yet. We still have a lot more to prove and a lot more progress to make, but it’s definitely a big confidence booster.”

SDSU opened the competition by brushing aside Creighton in a convincing 83-52 win on Nov. 28.

The Bluejays (5-2) entered the game tallying 78.8 points per game, but the Aztecs (8-0) were able to impose their defensive will from the start.

Creighton leading scorers – sophomore guards Marcus Zegarowski and junior Ty-Shon Alexander – were held to a combined 15 points, and the team was also limited to 4-for-23 shooting from the 3-point line (17.4%).

Offensively, the Aztecs were as – if not, more – efficient.

Junior guards Malachi Flynn and Jordan Schakel, as well as Mitchell, contributed to that statistic with three 3-pointers each.

His momentum continued into the second game of the tournament when the Aztecs faced Iowa.

Well, at least in the second half.

But Flynn turned it on in the second period, scoring 28 points and rallying SDSU to an 83-73 comeback win against a team who beat then-No. 12 Texas Tech by 11 points a day earlier.

“It was fun,” Flynn said of the win over the Hawkeyes (5-2). “My teammates were encouraging me the whole time and we ended up getting a win. I think that was the best part about it.”

Head coach Brian Dutcher said the Aztecs showed they can find a way to win even after falling behind.

“We seem to have a level of mental toughness where we can withstand a team’s pretty good punch and hang with the game plan, keep defending, and find our way to the victory,” Dutcher said. “This team has shown it can do that, which is a good sign for this year.”

Flynn was named tournament MVP after averaging 24.5 points, 3.5 rebounds and assists and 2.5 rebounds per competition.

Mitchell said Flynn showed off his starpower in the second half against Iowa.

“He has the ability to take over the game at any moment, and he did so,” Mitchell said. “When one guy gets hot on our team, you just keep feeding him the ball until he’s not hot anymore. He got hot the rest of the game, so kudos to Mal.”

Flynn also scored a team-high 11 points in SDSU’s 62-49 win over Tennessee State on Nov. 25. As a result of his efforts, he was named Mountain West Player of the Week on Dec. 2.

Flynn didn’t seem too excited about the award, though.

“It’s cool to get,” Flynn said. “It’s nothing that I’m just going to be super happy about. We’ve got a lot more work to do. It’s only December, so we’re just going to continue to put our heads down and continue to work.”

Both were named to the All-Tournament Team.

Flynn, however, said rankings are insignificant this early on in the season.

“A ranking isn’t going to do you anything at this point,” Flynn said. “I think if we continue to win, then we’ll be ranked at some point, so for me, it’s not a big deal.”

The Aztecs open up conference play in their next game against Colorado State on Dec. 4.