Nick Ilvento stepping up as lone goalkeeper for Aztecs 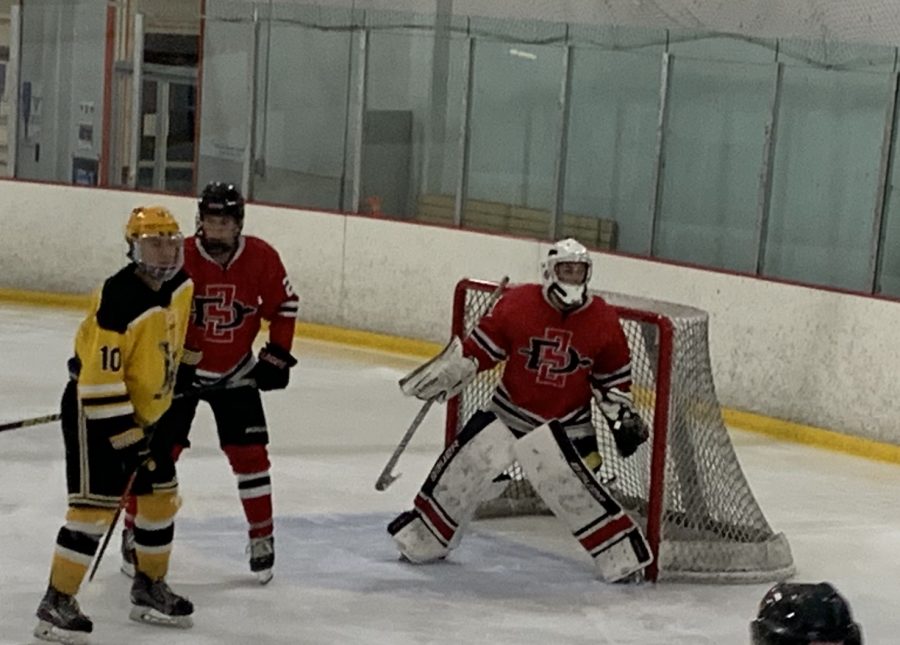 Most college hockey teams keep three goalies on their roster.

For San Diego State, this isn’t the case.

Sophomore goalie Nick Ilvento has started every game for the Aztecs this season and is held to the pressure of performing well every game. If he lets multiple goals in the net, he is expected to shake it off, because the Aztecs do not have the option of making a goalie change.

SDSU head coach Phil Bateman explained that Ilvento is pretty much not allowed to have a bad night, which is why the mental aspect of his game is so important.

“Earlier in the season, if he let in a goal his body language would get defeated,” Bateman said. “I had to reiterate to him that there’s never been a goalie in the history of the sport that hasn’t not allowed a goal.”

It is important for Illvento to not lose his confidence, and that is something he’s learned from playing goalie from a young age.

Ilvento explained how he first decided to play the goalie position.

“It all started when I was young and would bounce a bouncy ball back and forth in the living room with a hockey stick I had,” Ilvento said. “We didn’t have a goalie when I was young, and I tried it out and never stopped.”

Ilvento first started playing hockey when he was 5 years old. His skill has led him all the way to college hockey.

The Aztecs have won 19 out of the 23 games Ilvento has started this season. In the team’s game against Long Beach State on Dec. 6, Ilvento saved 47 out of the 49 shots on goal. His save percentage is currently 0.902, and he has stopped a total of 560 shots attempted by other teams.

Bateman said he was once a goalie too. He works on emphasizing the mental aspect of the goalie position with Illvento.

“I was a goalie and I know what that headspace is like,” Bateman said. “It is a lot of pressure.”

When asked about his pregame routine, Ilvento said it generally entails a nap.

“I have to take my pregame nap … I actually have to,” he said with a laugh. “Then I go into watching some hockey highlights. I show up and stay focused in warmups to be able to go out there and do what I always do.”

Ilvento began playing for the Aztecs during the 2018-19 season as a freshman. He watched senior Austin Hathcoat start as goalie in all the Aztec’s home games. Hathcoat graduated in May 2019, but Ilvento was ready to take on the starting role after learning under Hathcoat

Ilvento said he’s had many memorable moments in his career thus far, but one stands out.

“It would probably be my first game ever (for the Aztecs),” Ilvento said. “It was against San José State which is close to my hometown, so there were a lot of people there I knew. It was my most memorable game for sure.”

For the remainder of the season, Ilvento is working with Bateman on remembering to stay defiant in net.

Bateman wants Nick to remember that no goalie is perfect.

“You’re going to allow a goal. It’s what you do after that and being more defiant,” Bateman said. “To his testament, (I feel) he has become more defiant.”

“Our defense is strong especially after we get a goal scored against us,” he said. “It’s not hard to refocus (myself) and focus on the most important shot being the next one.”

Ilvento looks forward to finishing out the rest of the season and helping his team reach their milestone of 20 wins or more.