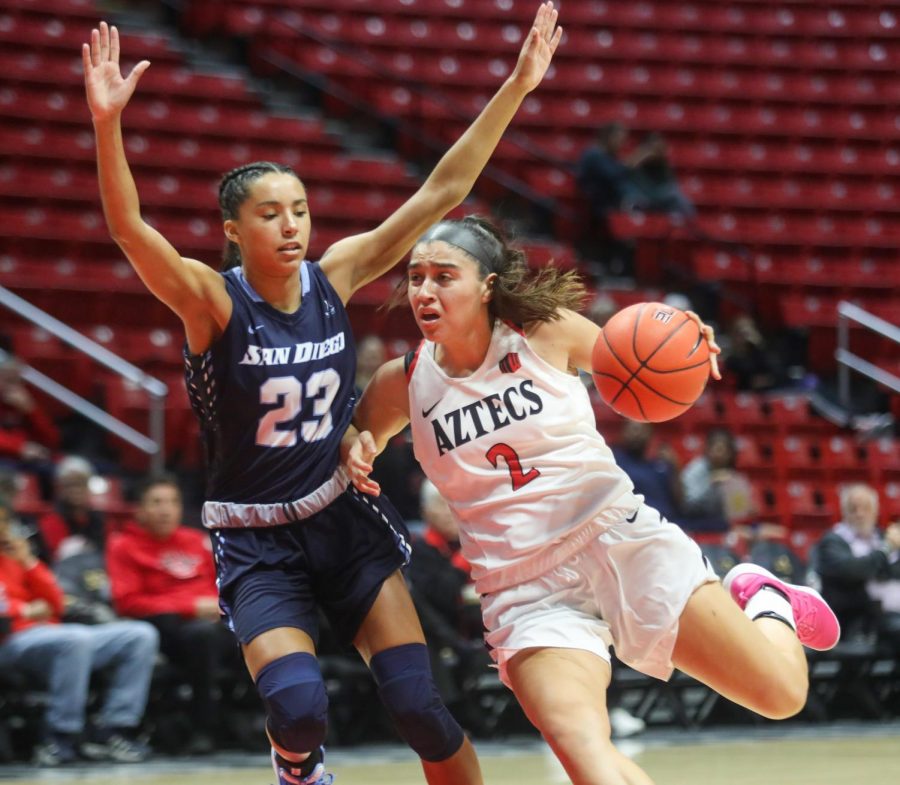 Sophomore guard Sophia Ramos attempts to shrug off a San Diego defender in the Aztecs' 70-47 loss to the Toreros on Dec. 11 at Viejas Arena.

The Toreros defense came out strong, and SDSU was unable to secure a basket until four minutes into the first quarter, when senior guard Taylor Kalmer put the team on the scoreboard with a layup, followed by a two-point jump shot shortly thereafter.

Sophomore guard Sophia Ramos kept the streak alive, pulling through with a field goal to give the Aztecs another two points.

SDSU came up with a 10-4 run, bringing them within two points of San Diego. However, USD remained on top, and the game saw zero lead changes all four quarters.

Ramos, who lead the team with five rebounds, said the level of fierceness brought to the court by both teams was not the same.

“They just had a different fight than we did,” Ramos said.

That proved especially true in the second half.

The Aztecs remained relatively within range of the Toreros throughout the first and second periods. However, USD’s lead expanded from four points to 11 by the end of the third quarter.

The fourth quarter saw a 15-0 run by San Diego. SDSU did not see a basket until late in the quarter with a jump shot by senior center Zayn Dornstauder.

The Aztecs struggled to keep up throughout the remainder of the game, with the Toreros shooting 61.1% on field goals in the fourth quarter alone, compared to the Scarlet and Black’s 38.5%.

Head Coach Stacie Terry-Hutson said the speed and pressure put on by USD took its toll on the Aztecs.

“(USD) outplayed us the majority of the time,” Terry-Hutson said. “They came out with a good game plan to pressure us, and to play fast and score and transition, and we kind of fell into that.”

Defensive play also proved to be a tough area for the Aztecs throughout the night.

SDSU turned the ball over 20 times throughout the game, and was outrebounded by San Diego 44-22.

Twenty of the Toreros’ rebounds were offensive. Terry-Hutson said this was an area that contributed to the Aztecs’ loss.

“When you give up 20 o-boards, that’s 20 times that you give (the Toreros) a second chance,” Terry-Hutson said.  “I’m not a mathematician, but that’s not good math to win games.”

Terry-Hutson said much can be gained from the night’s loss.

SDSU is scheduled to play in Riverside on Thursday, Dec. 19 against California Baptist University.