No. 20 men’s basketball prepares to take on Utah in first-ever game at Staples Center 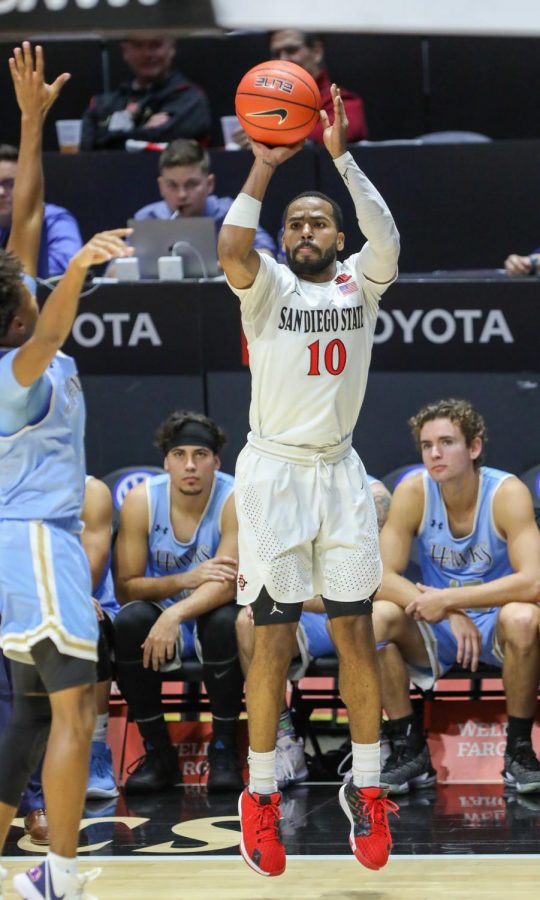 After a dominating victory over San Diego Christian on Wednesday night at Viejas Arena, No. 20 San Diego State men’s basketball seeks its 12th win of the season tomorrow afternoon.

Only this time, the Aztecs will face their toughest opponent yet on a neutral court.

SDSU will take on Utah in the first game of the Basketball Hall of Fame Classic at Staples Center.

A team like the Utes (9-2) is one that many NCAA Tournament-caliber programs will have to go through come March.

Utah is coming off a Wednesday night victory of their own: an upset win over No. 6 Kentucky in the Neon Hoops Showcase in Las Vegas. Other notable Utah wins came against Nevada, Minnesota and BYU, a team SDSU defeated by a score of 76-71 on Nov. 9.

The game marks the first-ever appearance for the Aztecs (11-0, 2-0 Mountain West Conference) at Staples Center. The contest will be the third neutral-site game played by the Aztecs this season.

Head coach Brian Dutcher said playing at a neutral location is especially a benefit for Power Five teams like Utah in terms of rankings.

“The power conferences all want to play neutral court games now,” Dutcher said. “They get the boost of not playing a home game from an RPI standpoint or NET index standpoint to play a neutral site game, so it’s a little higher value than a home game.”

Saturday is also the homecoming for two Los Angeles natives on the Aztecs roster.

Senior guard KJ Feagin, who grew up a Lakers fan, said he knows the implications behind playing in an arena like Staples Center.

“I grew up just seeing all the historic players who come through the Lakers,” Feagin said. “There’s some weight that carries playing in Staples, so I want to put on a show. I’m from LA, so I want to do it justice.”

Although Feagin hasn’t had the chance to see a Lakers home game, he isn’t necessarily unfamiliar with Staples Center. The Santa Clara transfer has been to Clippers and Sparks games at the venue.

Feagin said his dad bought about 75 tickets for his family to see him play on Saturday.

“I’m just ecstatic,” Feagin said. “It just seems like everything is coming full circle for me in my last year, just for me to come back to San Diego, come back home for the Staples Center game.”

Junior guard Jordan Schakel, who hails from nearby Torrance, said this will be his second time playing in Staples Center.

“I played in there one time previously, and I think it was for a championship, but nothing to this magnitude,” Schakel said. “You just grow up watching the Lakers and Clippers, see games there every night and you dream of playing there.”

The Scarlet and Black have won six of its last seven meetings with Utah, a former Mountain West Conference rival.

The Aztecs face the tough task of defending Utah sophomore forward Timmy Allen, who leads the Utes in points (21), rebounds (7.5) and minutes per game (33.5).

Allen’s points per game total is tied for 22nd in the country.