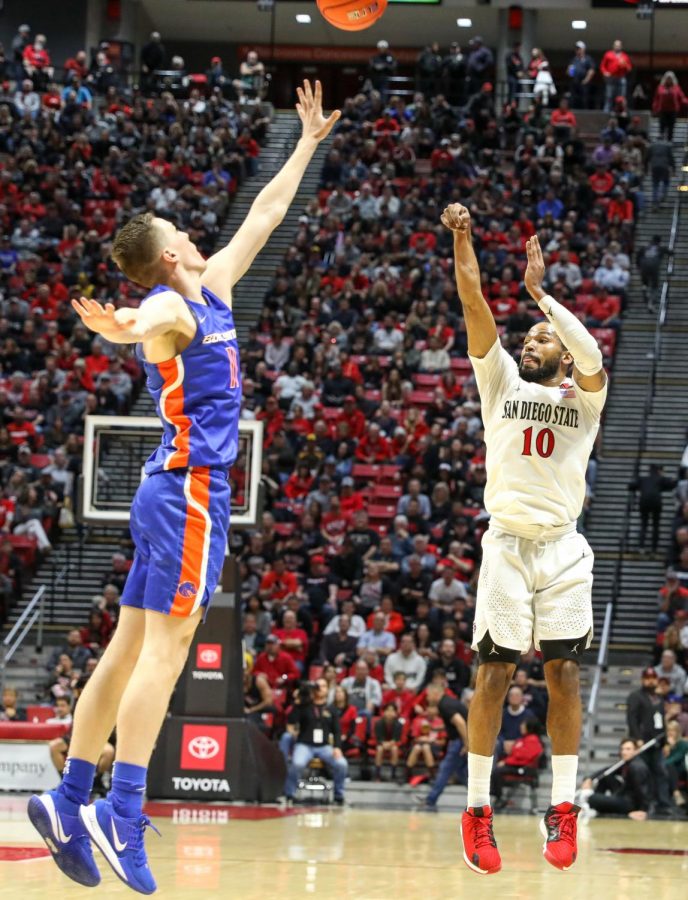 Senior guard KJ Feagin shoots over a Boise State defender during the Aztecs' 83-65 win on Jan. 11 at Viejas Arena.

San Diego State men’s basketball remains undefeated after a 83-65 win over Boise State on Saturday night in front of a sold-out crowd at Viejas Arena.

With the success the team is having at 17-0 (6-0 in Mountain West Conference), the Aztecs have had three straight sellout crowds.

Viejas Arena started to look and feel like the days of Kawhi Leonard when the crowds were deafening.

“When we came in for our last huddle, I kind of got to take a moment to look around and just appreciate what we’ve built this year,” senior forward Yanni Wetzell said. “Just got a lot to thank for Aztec nation and The Show (SDSU’s student section).”

Here are three observations during the Aztecs’ win.

The problem was Santa Clara’s record of 39-56 in those seasons.

He transferred to SDSU to become a winner, even if that meant sacrificing some of his offensive numbers.

Against the Broncos, Feagin scored 23 points while shooting 5-for-7 from downtown and 9-of-16 overall.

“From the first jumper, I knew that was going to be one of those breakout games,” Feagin said. “I’m just happy to get out of that slump I was in. Now, it’s about stringing some good games.”

This game brought Feagin back to his SCU days when he was the Broncos’ primary scoring option.

“It definitely took me back to them days,” he said. “I felt like every shot was going in. It was good to feel like that again.” 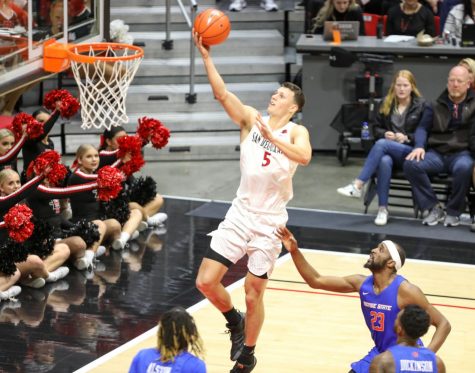 Senior forward Yanni Wetzell lays the ball in during the Aztecs’ 83-65 win over Boise State.

Before the Aztecs called their first timeout, they scored 25 points.

That’s 25 points scored in the game’s first eight minutes, which was on pace for over 100 points.

No, SDSU didn’t end up scoring 100 points, but that fast start showed the type of firepower the team has offensively. It especially helps when the team is fuelled by a rabid fan base.

“We got off to a fantastic start,” Dutcher said. “The crowd got engaged immediately. We just got that wave of momentum.”

Dutcher said the 3-point shooting has fuelled the Aztecs’ success on Saturday and throughout the season.

“When you’re making threes early and they have to run out and take the three away, then you get everything,” Dutcher said. “The 3-point shot is really a weapon for us this year, and we shoot it from multiple positions – not just one position. We’re dangerous in the offensive end because of the three.”

The Aztecs displayed a glimpse of their offensive potential and firepower with spurts of nailing shots in bunches.

3. Aguek Arop makes his return in over a month

The last time sophomore forward Aguek Arop saw game action was on the road against Colorado State on Dec. 4. Since then, he has been nursing a shoulder injury.

Dutcher said Thursday he hopes to get Arop back on the floor “sooner than later.”

The answer Saturday night was sooner when he entered at 14:28 mark in the first half.

Arop’s return comes as a bit of a surprise because the pregame broadcast roster listed him as out.

In his two minutes of game action, Arop did not seem timid offensively. He fired and missed on two shot attempts.

With the game’s fast pace in which Dutcher used a smaller lineup, he didn’t feel the need to put Arop in the game for more than two minutes. Although, expect Arop to be in the lineup when the games are closer and more physical.

Arop may not have made a significant impact immediately, but the team expects him to be a key player in upcoming games.

His teammates loved seeing their “Swiss Army knife” back on the floor.

“He’s one of those guys on our team that everyone loves,” Wetzell said. “He brings all the intangibles. He rebounds hard, gets on the floor and does those little things. A lot of people don’t see all the little things he does.”