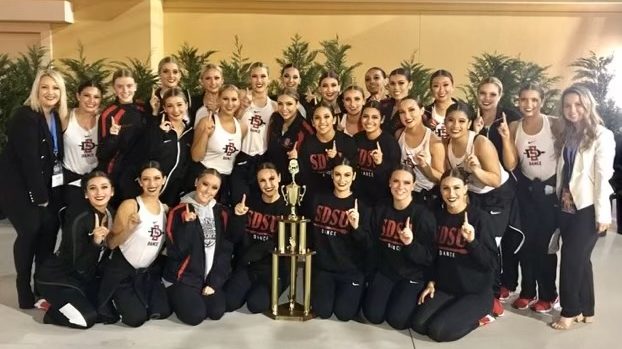 The SDSU Dance Team won its national title by placing first in the Division 1A Hip Hop competition in Orlando, Florida.

Despite having only been in existence for eight years, the team placed in the top three of the championships last year. The national title is the team’s first in school history.

“This is only our eighth year at this competition,” she said. “To win this year was such an honor to go from third to first and be recognized as one of the best of the best. To be acknowledged as part of that caliber is an honor.”

The competition featured well-established programs such as University of Nevada, Las Vegas, Lousiana State University and Memphis. Each of those teams have been in contention for the national title for the past 15 years.

“I felt like everything that we put in made sense,” she said.

“I blacked out for a second,” Mendrala said. “This was a moment that we’ve all been dreaming of, and there was one point where I thought it was impossible. The teams we went against were so talented and established. To be next to them was such an honor, and we were when we heard out name called, I was so taken aback that I still can’t even believe it.”

SDSU put themselves through extensive preparation in order to get ready for this moment.

The love and support the women received pushed them through the challenging times. Many family members, friends and alumni came out to the championships to support the team.

“What kept us going was all of the support we were getting,” Mendrala said. “We had alumni helping us out, our coaches were motivating us. It was a tough couple of weeks, but it all paid off and we did the best we could do as a team.

“It was so nice to see their faces and see how proud they were. It made us feel so thankful that we have such a community. It’s so much bigger than just our team, its a whole tribe of people who always support us and want the best for us.”

Looking ahead, Collins has one goal in mind for the future of the program: “continue growing.”

“Our goal is to always continue growing,” the coach said. “We always want to push ourselves to be the very best we can be, and that’s the real plan. We want our members to always be striving better to grow from your experiences and continue pushing forward.”