Men’s basketball looks to build on historic start in Albuquerque 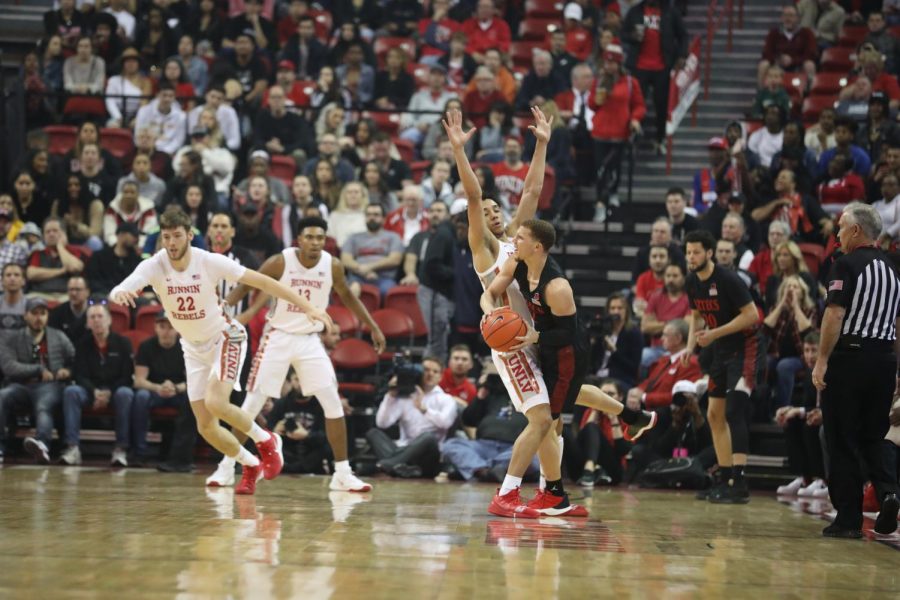 Junior guard Malachi Flynn drives to the basket against UNLV on Jan. 26 at the Thomas & Mack Center.

No. 4 San Diego State men’s basketball touched the hardwood and began its warm-up at Thomas & Mack Center about an hour before tip-off against UNLV.

“I think everybody’s reaction was just to be shocked at first,” junior forward Matt Mitchell said. “Me personally, I didn’t believe it. I just kept shooting, I was like, ‘There’s no way.’ It had to be a hoax or something like that.”

The Aztecs woke up with ambitions to improve to a school-record 21-0 start, but now, thoughts and memories of the Lakers legend flooded their minds.

Head coach Brian Dutcher was unprepared for the circumstances, but he told his players to enjoy every moment.

“I’ve been coaching for a long time, I’m 60 years old,” Dutcher said. “But that was a situation you’re never prepared for. You have your speech you’re leading into the game that you want to talk about and get the team ready to play. Then something like that happens, and they’re looking to you.”

Junior guard Malachi Flynn’s 21 points led the Aztecs in scoring while Trey Pulliam’s 18 was on fire off the bench – shooting 6-for-6 from the field.

After the game, Dutcher said he briefly congratulated the Aztecs in the locker room on the win then held a moment of silence while locking arms with his players.

“Kobe was their generational player,” Dutcher said of Bryant’s death. “He was someone they all looked up to, who impacted all of their lives. So I was sensitive of that moment, and obviously our thoughts and prayers for all the people that passed in such a tragic accident.”

“I want to be perfect, and (Bryant) chased perfection in his craft,” Feagin said. “He’s relentless in his pursuit. I kind of see that in myself when I come on the court.”

Now, the Aztecs continue their pursuit of perfection Wednesday at New Mexico.

Dutcher said the Aztecs will need to play disciplined defense.

“They attack the basket both off the drive and off the offensive glass, and they draw a lot of fouls,” Dutcher said. “We’re going to have to defend and try to avoid foul trouble.”

Last season, the Lobos didn’t have a goalscorer averaging more than 14.4 points per game, so the emergence of Lyle has been significant in terms of New Mexico’s offensive success (scoring 80 points per game).

Another threat to the Aztecs is senior forward Carlton Bragg Jr., who is averaging a double-double at 12.6 points and 10.3 rebounds per contest.

Dutcher said guys like Lyle and Bragg Jr. might give the Lobos a size advantage over the Aztecs.

“They’re really talented,” Dutcher said. “They’re long, they’re athletic. They’re going to be bigger than us at almost every position.”

The Lobos also hold an intangible advantage on their home court, known as “The Pit.”

New Mexico has an undefeated record at home this season at 13-0.

New Mexico’s success at home could be partially credited to its home crowd that can reach over 15,000 in capacity.

“I’ve been in there enough to know that I can’t talk to my team during the game, it’s so loud in there,” Dutcher said.

Aaron Tolentino and Cristian Alvarez contributed to this story.

Update: This article was updated at 8:07 a.m. on Wednesday, Jan. 29 to reflect that New Mexico is undefeated at home at 13-0. Despite being designated as the home team, the Lobos’ loss to then-No.18 Auburn was played at a neutral site — not in Albuquerque.