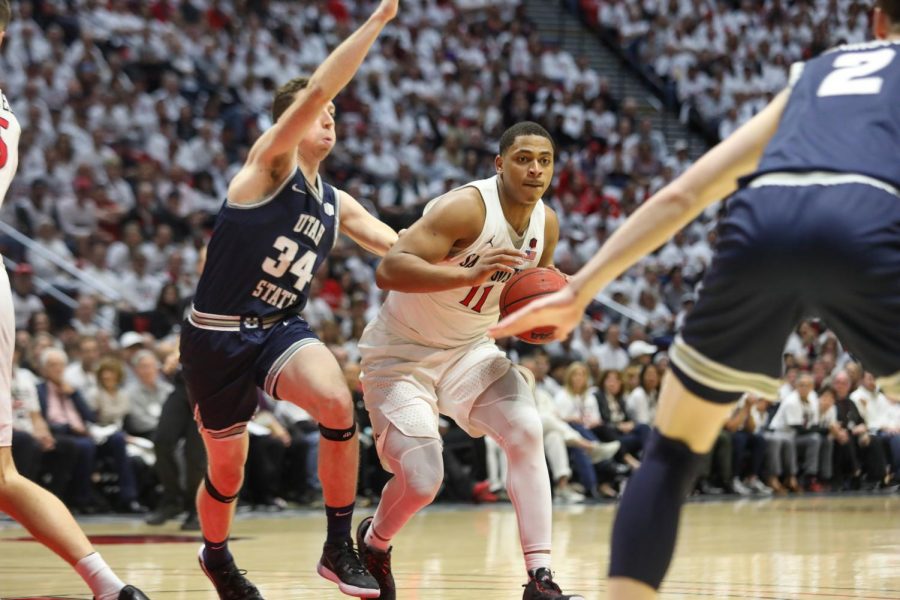 Junior forward Matt Mitchell drives down the lane during the Aztecs' 80-68 win over Utah State on Feb. 1 at Viejas Arena.

No. 4 San Diego State men’s basketball won its second contest of the season against Utah State with a 80-68 win on Feb. 1 at Viejas Arena.

“I’m not surprised,” senior guard KJ Feagin said of Mitchell’s performance. “We have a group of guys that are all talented and we’re all just sacrificing for the team. He got us going and he willed us to the win tonight.”

Mitchell scored just four points in the first half when the Aztecs were down by eight at the break but took over in the next 20 minutes.

He fueled a second-half comeback by scoring 24 points.

“My teammates found me,” Mitchell said. “I just felt like I was wide open sometimes.”

Mitchell fell three points shy of his career-high (31) — all while inspiring 10-0 and 7-0 runs in the second half.

Maybe it was because Mitchell wanted to impress Leonard who are both Inland Empire natives.

“He’s the biggest idol next to Reggie Miller in the Inland Empire,” Mitchell said. “There’s definitely a significance there, me having a big night on Kawhi’s big night. That’s definitely very special.”

Viejas was booming after Mitchell nailed back-to-back-to-back 3-pointers in less than two minutes to give the Aztecs a 50-49 lead with 13:16 left.

“Matt was rolling,” Dutcher said. “You can see his growth. He’s so much more balanced when he attacks now.”

It truly was a tale of two halves.

The Aztecs led by as much as seven halfway through the first half.

The Aggies then clawed their way back to go on a 14-0 run.

Entering halftime, the Aztecs were in an unfamiliar position, down 39-31.

But the second half was a different story.

It eerily replicated SDSU’s 83-73 win over Iowa earlier this season.

In that game, the Aztecs were down by nine at halftime but dropped 51 second-half points.

Despite the Aggies leading the Aztecs in points in the paint (28-14), second-chance points (10-8) and bench points (11-5), the Scarlet and Black prevailed.

SDSU was able to do that thanks to the 3-pointers – shooting 9-for-19 in the second half.

Feagin said the Aztecs had to make halftime adjustments to impose their will.

“We just came in at halftime and we admitted that we weren’t making them play our brand of basketball,” Feagin said. “We came out in the second half and fed off the energy of the crowd and we made them play our game.”

The Aztecs now have a week off before hitting the road to play Air Force next Saturday.