New influencers on the block: eTeens 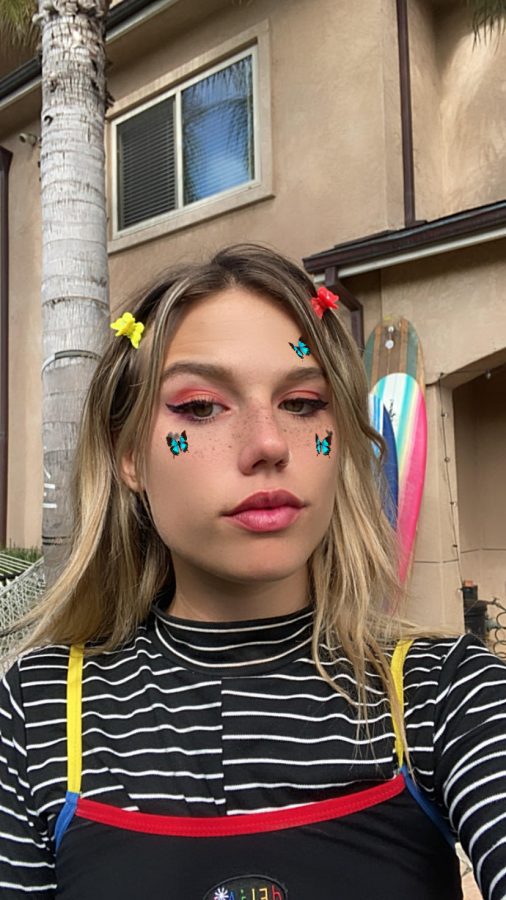 Pink makeup and filters are a classic look for eGirls.

A year ago, if you asked me or anyone my age what Tik Tok was, we would have had no idea what you were talking about.

Now, Tik Tok has lured us in with its abnormal yet unique culture that has begun to shape current trends we see every day. From choreographed dances to viral challenges, we are seeing users let their creativity flourish creating the Tik Tok universe.

For those who do not know what Tik Tok is, this may seem very foreign, but after downloading and spending a few minutes on the app, you may get obsessed.

The Chinese-owned application allows users to create 3 to 15 second long videos using effects, music and text. Users can also scroll through a page called “For You” that curates content for a specific user, leading to extremely high engagement.

On Tik Tok you can find a little bit of everything: short choreographed dances to hit songs using simple hand gestures, tips and lifestyle tricks, cute animals, cooking and recipes, style trends and lots more. Celebrities such as Will Smith, Reese Witherspoon and The Jonas Brothers can all be found using the app, and brands have turned to creating content for the app in hopes of promotion.

Many compare it to the infamous “Vine” app which was shut down in late 2016. Since then, people have mourned over the loss of the app for years on Twitter, praying for a return and expressing the nostalgia of a time when they could once scroll endlessly through 6-second clips.

Well, thanks to Tik Tok our prayers have been answered … I think?

It has evolved into an empire with more than1 billion users, according to CNN. Similarly to Youtube and Instagram, the app has created its own army of influencers who, at the moment, seem to hold more power than the Kardashians.

One group in particular, “The Hype House,” is a group of 20 teenagers who found their fame on Tik Tok making dance videos and other bits. The group moved into a mansion in L.A. where they hang out and create content. The house account has more than 7 million followers. The hype queen, 15-year-old Charli D’Amelio, has 21 million followers.

Tik Tok users’ style and clothing trends are being labeled as “eBoy and eGirl .” What do these styles and slangs mean?

To be an eBoy or an eGirl means the person has a persona on the internet, more specifically, Tik Tok. This persona is filled with aesthetically pleasing bedrooms, golden-hour lighting and trendy clothing. The beauty that makes the “e” lifestyle so desirable is that absolutely anyone can be one.

Unlike Instagram and Youtube, users no longer need to travel the world to take lots of photos or do David Dobrik-Esque pranks in vlogs in hopes of becoming an influencer. All one needs is a trip to Goodwill, a little bit of practice and an iPhone.

The style is quite simple – chained necklaces, beanies, stripped undershirts, band T’s, pastel hair clips, mom jeans, denim jackets, white gym shoes … or essentially anything you can find at Brandy Melville. The more vintage-looking your outfit is, the better off you are.

As for makeup and hair, there are multiple directions one can go when following the trend. One is the natural look — light makeup, plain clothes, natural hairstyles, hipster glasses, lightly tinted chapstick and pink blush. The other is winged eyeliner, colorful shadow, septum piercings, facial stamps, colorfully dyed hair and pouty faces. This fashion trend is the perfect mix between 21st century punk goth and an adolescent take on any era of fashion before the 2000s.

These trends have surfaced throughout college campuses’ and in clothing stores across the world, showing the influence that lies behind the eTeens.

In today’s current state, what is there to say about the empire of Tik Tok?

We live in a world where Amazon delivers the same day, the impeachment hearing is almost as regular as the weather forecast, 18-year-old Billie Eilish swept the Grammys and fame happens over night. Tik Tok influencers have more followers combined than the president alone.

In a society that craves entertainment and where teenagers have built up more influence than adults – is it surprising this app and its culture has blown up? Absolutely not.

Tik Tok embodies the teenager of today through its vast array of content. The eBoy and the eGirl are trying their best to navigate through life on social media. This platform allows them to basque in their adolescence while unintentionally influencing life around them.