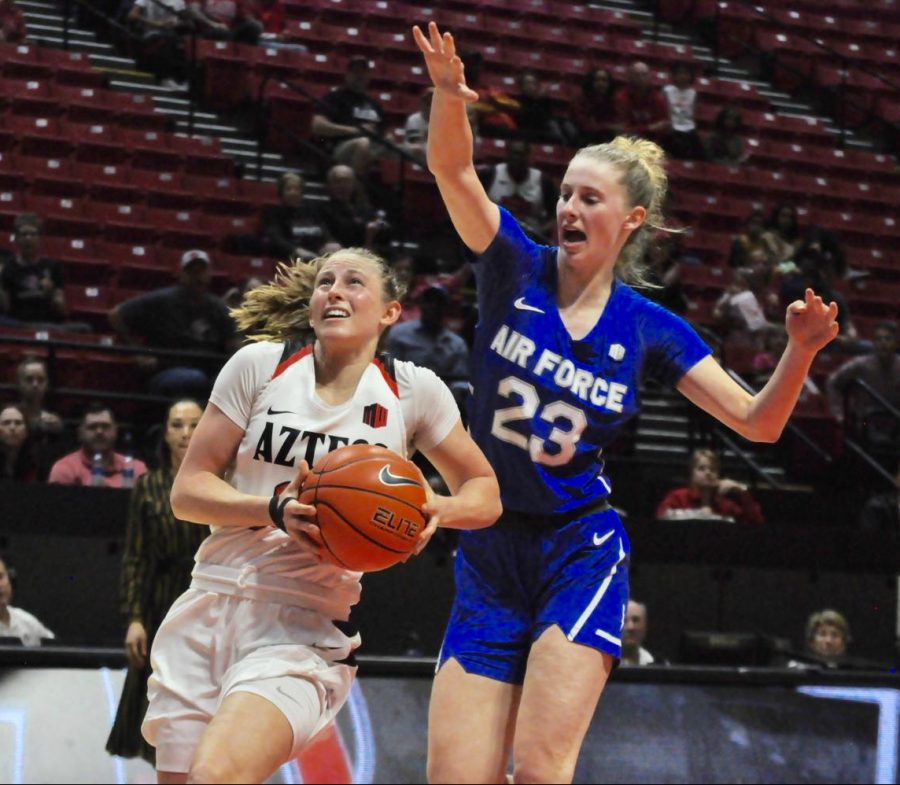 Senior guard Taylor Kalmer goes pass the Air Force defender for a layup. Kalmer has had 19 straight double-digit scoring games – the longest streak by an Aztec in the Mountain West era (since 1999).

The Aztecs’ (11-14, 6-7 Mountain West Conference) three-game win streak ended after Falcons sophomore forward Riley Synder made what turned out to be the game-winning basket with five seconds left.

Saturday’s match was also commemorated as National Girls and Women in Sports Day.

This game proved to be a defensive battle for the Aztecs. Their offense had to restrategize against the Falcons.

The Aztecs managed to have some success, but most of the scoring came inside the paint.

Twenty-four of SDSU’s 49 points came from the key, 14 of them coming in the first half.

“(Air Force) pressured a lot. They denied us so what any team does we tried to get to the rim,” senior guard Taylor Kalmer said.

Both teams after three quarters combined to go 0-for-17 from downtown. The Aztecs had five attempts themselves.

The game’s first three-pointer came in the fourth quarter, which was made by Aztecs sophomore guard Sophia Ramos with nine minutes left.

It was SDSU’s only three made.

The Falcons hit two 3-pointers of their own but finished 2-of-16 for the game.

The Aztecs were protective near the glass against the Falcons.

More of the same would continue in the second half, with the Aztecs getting two more additional blocks – for a total of seven blocks for the game.

“We have historically been more of an offensive team than a defensive team, but we definitely showed more of our defensive side tonight,” senior center Zayn Dornstauder said.

Dornstauder had three blocks, along with adding five rebounds and 11 points.

It was one block short of tying the team’s season-high record.

“It’s pretty cool, but to be honest I don’t really care because we lost,” Kalmer said of the streak. “I’m just trying to help my team win in any way I can.”

That is the longest streak by an Aztec in the Mountain West Conference era.

“(Kalmer) is a competitor. She had one of the better defenders on her tonight and was still able to do that,” Terry-Hutson said. “She is going to give you 110% every single night both offensively and defensively.”

The previous streak for the Aztecs was held by Courtney Clements, who scored double-digits for 18 straight games back in the 2012-13 season.

SDSU is back on the road this coming week as they travel to Albuquerque to play the New Mexico Lady Lobos inside Dreamstyle Arena, famously known as “The Pit.”