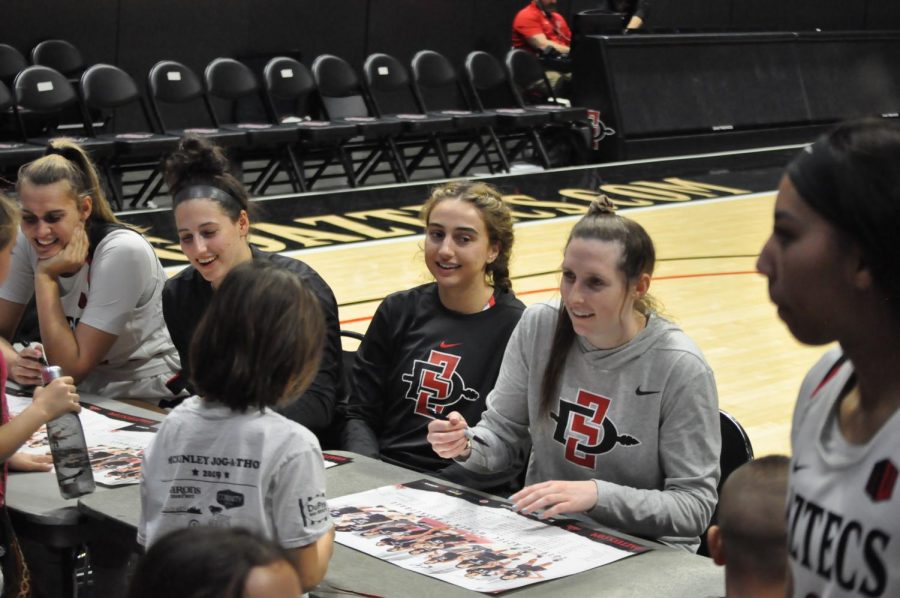 The day is celebrated to inspire young girls to participate in sports.

Head coach Stacie Terry-Hutson said her message to her team was no different today than any other day, because for them everyday is about inspiring women.

“You know every day for us is about young ladies and inspiring them to play a sport or do whatever they do and do it well, so no difference for us,” Terry-Hutson said. “Everyday for us is Women in Sports Day.”

Terry-Hutson also said she hopes her team can inspire young women to be determined and pursue their dreams.

“I think sports, just putting it that world, is such a great teacher of life skills.” she said. “So I think through sports my young ladies can mentor and help motivate other young girls to never give up to go steadfast towards their dreams whatever it may be.”

Before the game, members of SDSU women’s rowing, volleyball, swim and golf teams were set up outside the arena where they taught young girls about their sports and inspired them to participate in sports they were unfamiliar with.

Kinesiology senior and SDSU women’s rower Brooke Boron said she was excited to expose youth to her sport.

“It’s so fantastic just seeing the kids’ energy and then everybody just wanting to try it out,” Boron said. “The best thing in the world to see their faces light up on something they’ve probably have never even seen before. It was just really cool to get the sport of rowing out there for boys and girls too.”

At halftime, Paralympic silver medalist Lacey Henderson spoke about her journey through athletics and what brought her to compete in the Paralympics. She also talked about the empowerment of this influential day.

“You don’t tell a girl in sports what she can and can’t do,” Henderson said. “That is the truth and that is how my career started, which is crazy.”

Henderson said she participated in track and field as a young girl before she discovered she had a soft tissue tumour in her leg, meaning her leg had to be amputated. But this life changing challenge did not stop her from doing competitive cheer in high school and college, and eventually competing in long jump for the Paralympics.

In a one-on-one interview prior to her half time speech, Henederson, spoke about how empowering it was to see so many young women support each other and to see teams celebrate a day that specifically gives recognition to female athletes.

“I think when I was young, there wasn’t really a moment to celebrate just women in sports,” Henderson said “And I think growing up for a long time, I was raised by boys and I was kind of a tomboy, not really by choice but kind of by circumstance and to see people make a moment, to kind of make a space for exclusively women and to help kind of show solidarity.”

“I find that the term itself is actually way more inclusive because it includes that you are more than just an athlete,” she said. “It includes all the other aspects of you.”

Redshirt senior and guard Taylor Kalmer said it was fun and humbling to see young girls look up to her and the women’s basketball team.

“There were a lot of people here, and the kids just gave a reminder for us of why we are out here — hopefully to inspire some young girls,” she said. “It’s just humbling.”

Redshirt senior and basketball center Zayn Dornstauder said proving women are just as capable as men is important as a female athlete.

“Our games are just as entertaining I would say and just going out there and proving we are just as capable,” she said.

Business junior and women’s volleyball player Lauren Lee was outside the arena teaching children how to play volleyball. She said she loved how the children were willing to participate in sports even when they didn’t know how to play.

“I think it’s really awesome and it’s really encouraging to see that they look up to us and they’re inspired by us,” Lee said. “I love how they are really willing to come out and play.”

Sophomore golfer Tatum Mahon said she herself looked up to college athletes as a child.

“I think it’s really cool being out here because I know when I was their age I would always really look up to college athletes, especially females, and I just thought it was so cool that it was something you could do in college,” Mahon said.

Freshman swimmer, Paige Mitchell said it was fun to be able to share her sport with the youth that came to support National Girls and Women in Sports Day.

“It’s really cool to have all these kids come out here and look up to us and ask us all the questions and it’s fun to be able to talk about our sport and our passion,” Mitchell said.

Senior swimmer, McKenna Meyer, said it is important for female athletes and women’s sports to be acknowledged.

“I think it’s really important especially here a lot of our football and basketball programs are so strong that it’s nice to get the recognition that hey women do sports too and we are just as good as them,” Meyer said. “We can win conference and we might not bring in the money but we have good camaraderie and sportsmanship that should be recognized.”