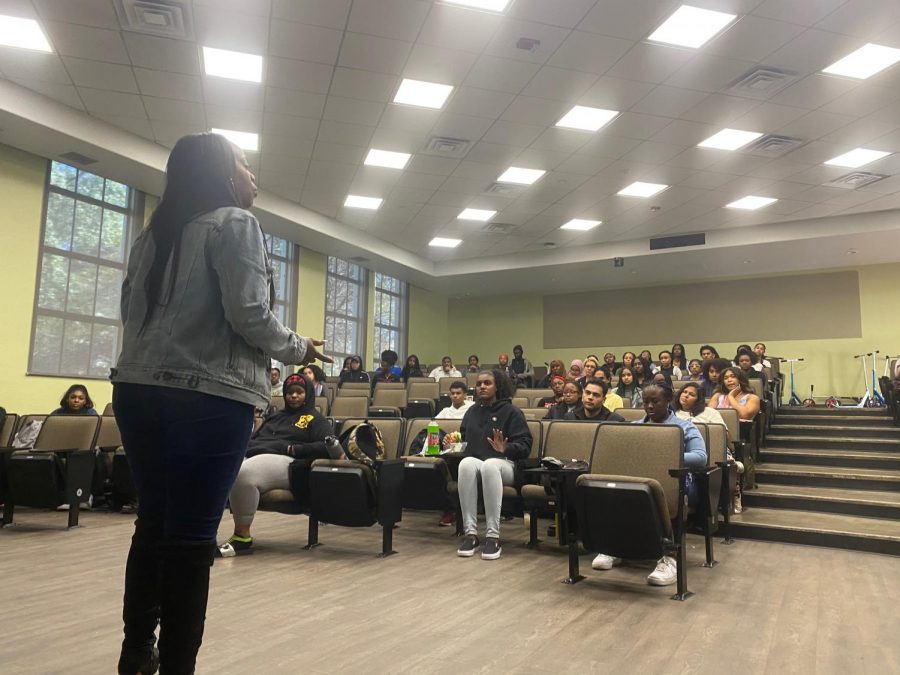 Diagnosed with HIV at 19 years old, Brown spoke to SDSU students to promote her new book, “The Naked Truth: Young, Beautiful, and (HIV) Positive,” as well as to raise awareness on the importance of sexual awareness.

Brown said her experiences speaking at numerous events in the past have culminated into three main messages she spreads to her audiences regarding HIV.

“One would be to get tested,” Brown said. “I also tell people to be educated because (at that time), I still haven’t seen anyone who looked like me that had the virus … My last one is to be responsible.”

Africana Studies lecturer Dr. Bonnie Reddick helped coordinate the event with the Black Resource Center and said a prior speaking opportunity for one of her classes led to a chance to speak to a bigger audience outside the classroom.

“I was teaching a black women’s studies class and I saw her on MSNBC, so I emailed her,” Reddick said. “She hit me back up, emailed me and gave a talk to my students which was great. So I hit her back up and said, ‘I’ll pay the director of Black Resource Center, I’d really like to bring you back again,’ and she’s here.”

Brown said winning an award at the Ryan White National Youth Conference in the past, a national event on HIV care and treatment, helped give her nationwide exposure in spreading HIV awareness.

“Here at this conference there were over 1,000 youth from all over America who had HIV at this conference,” Brown said. “I was given an award at the conference for my courage. I had no idea that by putting the story in the paper I was doing what so many people are scared to do.”

Brown also said the experience gave her connections that allowed her to elevate her platform and activism to the next level.

“I remember there were people in the audience that completely changed my entire HIV activism career,” Brown said. “Before you know it I was traveling, doing TV shows and it was a whirlwind of experience.”

Students who attended the lecture said the informative lecture opened their eyes on the risks of contracting the disease, especially in a college campus.

“I feel like it was really informative and also needed because a lot of people in our generation don’t understand the risk (of contracting HIV),” O’Neal said. “I feel like having Marvelyn come talk to us showed us just how real it could be for us as it was for her.”

Biology freshman Amber Davis said the lecture gave her a new sense of awareness about contracting the disease.

“This is something that’s not really talked about and is taboo,” Davis said. “So having her debunk it for us is just really good to hear and to take that step to be educated.”

O’Neal said the most important lesson she gathered from the lecture is that communication is key, especially when it comes to sexual health.

She also said she is now more aware of who she trusts.

“A lot of us don’t really think that it could be people that you trust and love and care about so I feel like that was really important that she said that,” she said. “She brought up a very important question for us to ask in the future.”