College Democrats and College Republicans debate ahead of March 3 primary 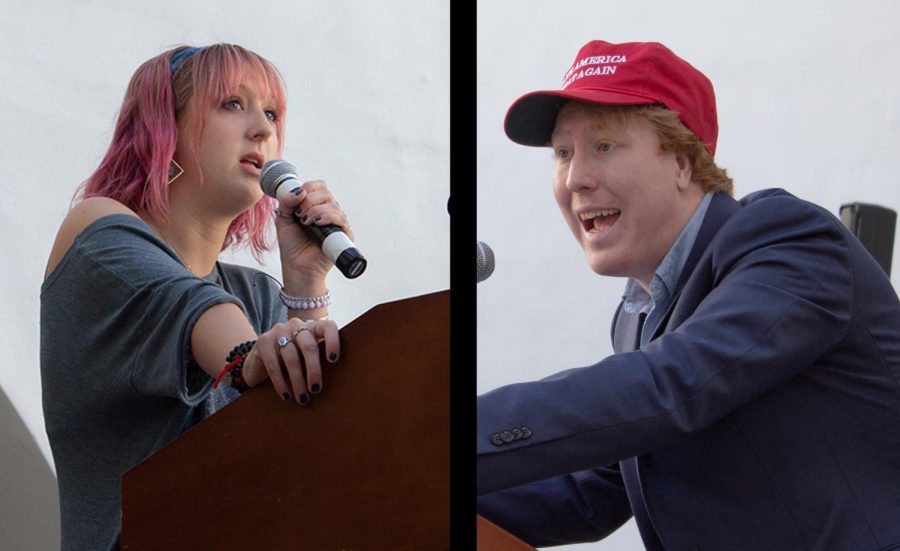 Immigration reform, student loans and reproductive rights were topics of contention Monday afternoon when the San Diego State College Republicans and College Democrats debated in the Student Union — the first of many political conversations ahead of the 2020 election cycle.

Sepulveda said the Obama administration was a hallmark of American leadership, a step in the right direction and something to strive for in future politics.

“It is time for us to return to these values that are inherently American,” Sepulveda said.

Aiken said the policies implemented by the Trump administration are slowing the process of seeking asylum and are unfair to those seeking refuge from social, environmental and economic barriers.

“(These issues) have mostly been caused by our government and multinational corporations … So by stopping them from getting to this country, it is inhumane and unfair,” Aiken said.

“Economic hardship is not a reason for asylum,” Krvaric said.

Krvaric said individuals in Central and South America, as well as West and Subsaharan Africa, need to be helped in their own countries.

“Your country needs to be redeveloped and given incentives for them to stay home,” Krvaric said.

Krvaric also backed a merit-based system for allowing migrants into the United States.

When it came to DACA, Sepulveda noted the Obama-era plan was a bipartisan proposal initially introduced by the Ronald Reagan administration. Krvaric said it was one of the “few mistakes of his administration.”

Aiken said she agrees with proposals by Democratic presidential candidates Bernie Sanders and Elizabeth Warren that seek to abolish private healthcare companies in favor of Medicare for all. She said it should be funded by taxpayers just like educational benefits.

“We shouldn’t have insurance companies, hospitals and health organizations profiting off people being sick and dying,” Aiken said.

Castañeda said the cost of current Medicare for all proposals is too much money to be feasible.

“It simply will never work, it will only exacerbate problems we already have because of the scarcity of resources available,” Castañeda said.

Student loans and the cost of college

Castañeda said student loans should not be forgiven, citing his own experience as a commuter student living at his parents’ house to save money.

“I prioritize making financially conscience decisions,” Castañeda said. “Government proposals only encourage or discourage people, and forgiving student loans for people who were irresponsible, who didn’t act the way they should have, you’re only going to encourage more of that behavior.”

Sepulveda said people don’t always enter college when they are financially ready, and that they do it to better themselves or “invest in their career.”

“The reason why you go to a state school is that you want to have the economic opportunity to grow as an individual and as an American,” he said.

Aiken also said the U.S. should follow the lead of countries that have established systems that provide free higher education, adding the economic plans of some Democratic candidates will bring in the money necessary to make it a reality.

Krvaric said the reason why some European countries provide free higher education is that they are “much more selective” in their exams and assessments.

“If we do want to have college paid for, then you’re going to have to make the decision to limit the pool of students that are coming in,” Krvaric said.

Krvaric said abortion legalities should be a states rights issue. He argued such reproductive rights laws already passed in southern states are later overridden by federal rulings. He also said he disagreed with late-term abortions.

“I think we can all agree that third-trimester abortions, in particular, are absolutely just heinous,” Krvaric said.

Aiken said the supreme court ruling of Roe v Wade in 1973 overrules all of the attempts to change the ability for women to get an abortion — meaning the federal government has every right to intervene if a state tries to limit reproductive liberty.

“Being the only woman on this stage, why are we here arguing about whether the government should tell women what to do with their bodies?”

Sepulveda said climate change should be tackled as an issue both on Wall Street and by the federal government.

“I think we need to address that not everything can be handled by the government, but I do think the government should set the policy that penalizes companies that hurt and pollute our environment,” Sepulveda said.

Krvaric said he agrees with the efforts to address climate change, and that the current, popular GOP stance on climate change seems futile.

“We’re conservatives, what are you conserving if not the environment around you?” Krvaric said.

He said the republican party has a long history of environmental conscientiousness going back to Theodore Roosevelt, but the fossil fuel companies are casting a shadow of climate change science doubt.