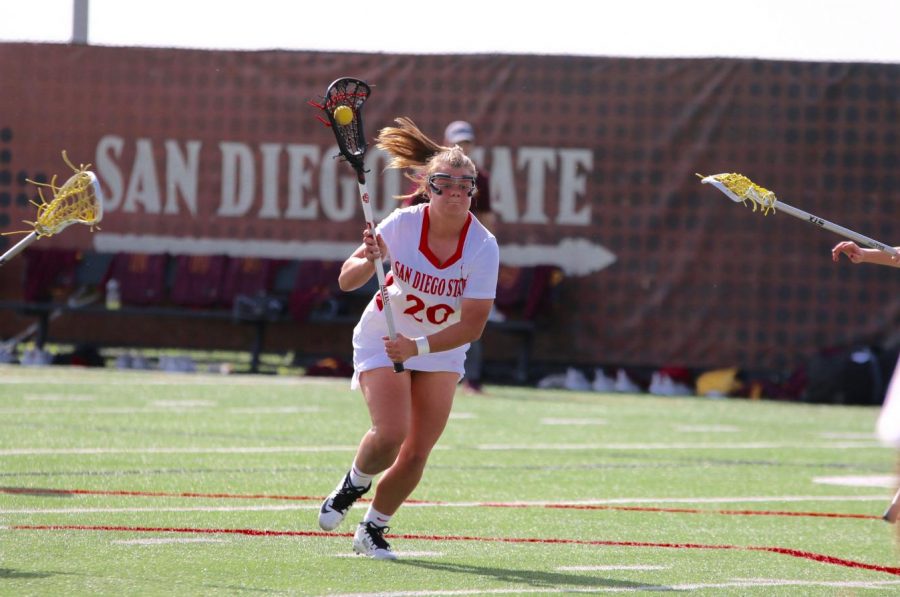 Freshman attacker Camdyn O’ Donnell looks to score during the Aztecs' 19-18 win over Arizona State on Feb. 21. O’ Donnell also scored the game-winning goal in the closing seconds to defeat the Sun Devils.

The Aztecs (1-1) earned their first win of the regular season thanks to a game-winning goal by freshman attacker Camdyn O’ Donnell with 24 seconds left.

“It was a team effort throughout the entire game,” O’Donnell said. “We were going back and forth. My teammates had trust in me and that put confidence in myself too.”

The Poway native also scored a goal with 48.7 seconds on the clock, crushing the ball through the net to tie the game at 18 apiece.

Aztecs head coach Kylee White was pleased with her team’s performance overall and was glad they were able to push through a high-scoring game.

“We played it close in the first half to our game plan, but we were missing some key things,” White said. “To win a back and forth battle where it comes to the end and where they gutted it out, that is the best part of it.”

ASU opened the first half striking early and often, taking a 3-0 lead in the first three minutes, however the red and black scored four goals to take the lead at 4-3.

Both teams exchanged goals, but ASU was able to establish separation again, taking a 9-6 lead with three minutes left in the first half with two goals by Sun Devil senior attacker Kerri Clayton. However, junior attacker Lexi Tan was able to score two consecutive goals for the Aztecs, shortening the deficit to 10-8 at halftime.

At halftime, the Aztecs scored four unanswered goals and were able to hold ASU scoreless for nine minutes, leading 12-10.

The Sun Devils, however, would not go down without a fight.

Clayton would score again, and so did the rest of her team.

ASU scored three goals to regain the lead at 16-14. At the two-minute mark, ASU looked poised for victory, holding on to a 18-16 lead.

However, the Aztecs responded with a late run fueled by senior midfielder Emily Resnick’s goal in the 17th minute.

O’Donnell took the reigns from there, scoring two goals to give SDSU the win.

“I’m excited that they were able to gut it out,” White said.

Tan finished the game with six goals on six shots for the day.

“All the credit goes to my teammates,” she said. “I just tried to complete it for them. It was wide open for the cuts and other stuff.”

Looking ahead, White hopes her team can continue to have the same mentality heading back on the road.

“We’ve got this,” she said. “The team that showed up today just has to be the same team on sunday. Going against No. 13 USC, it shouldn’t change the way that we play, and we need to go in there feeling that way. Today we figured out we can hang, we got to execute a little bit crisper.”

The Aztecs will head to Los Angeles to play at No. 13 University of Southern California on Feb. 23 at noon.