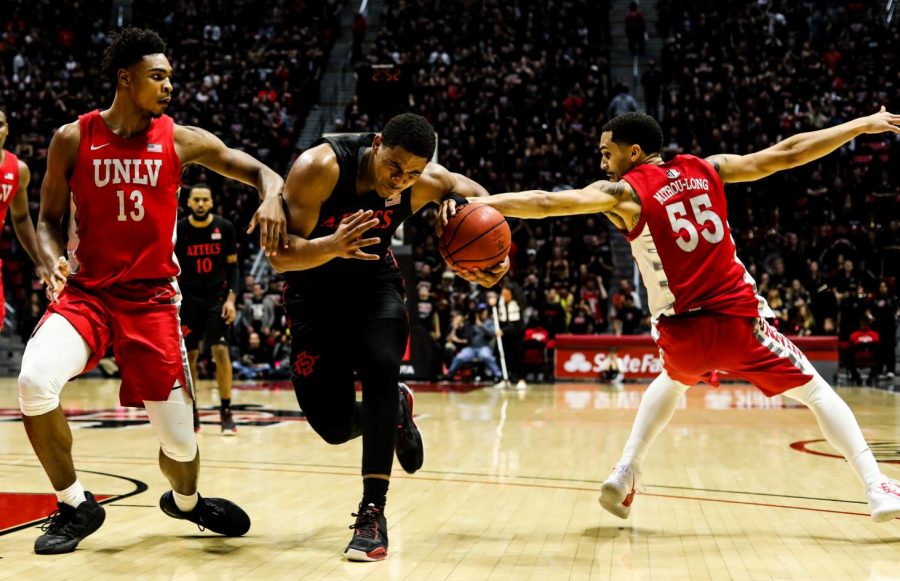 Junior guard Matt Mitchell attempts to secure the ball away from the UNLV defender during SDSU's 66-63 loss against UNLV on Feb. 22 at Viejas Arena.

Since clinching the regular-season Mountain West title on Feb. 11, San Diego State men’s basketball head coach Brian Dutcher has said numerous times he wants to get greedy and chase perfection before heading to Las Vegas for the conference tournament.

UNLV came into Viejas Arena in hopes of spoiling Dutcher and his team’s goal.

The Rebels did just that.

SDSU lost its first game of the season by a final score of 66-63 on Saturday evening at Viejas Arena.

The loss broke a school-record, 26-game win streak, 15-game conference streak for the best start in conference history and a 13-game home streak.

Here are three observations from SDSU’s first loss of the season.

1. Aztecs’ attempt at an incredible comeback comes up short 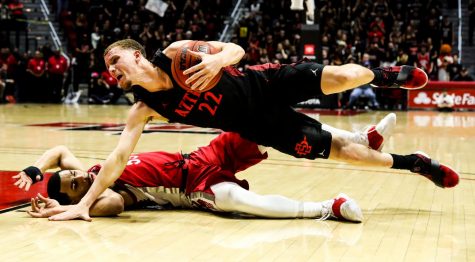 Junior guard Malachi Flynn is tripped up during the Aztecs 66-63 loss against UNLV on Feb. 22 at Viejas Arena. Photo by Kareem Jones.

Mitchell had a look to attempt a heave from midcourt but bounced off the backboard to secure the Rebels’ victory and the first loss on the season for the Aztecs.

However, the home team wasn’t supposed to make this game a nail-biter down to the final seconds.

Yet, eight points – two 3-pointers and a couple free throws – from junior guard Malachi Flynn in the final three minutes took the game to the final buzzer.

Flynn seemed like he wanted to single-handedly will his team back to victory, but he said that wasn’t his approach.

“I don’t think that’s my mentality,” Flynn said. “I think we were just all trying to win the game. It just played out how it played out.

Though Zeigler said those ratings aren’t without flaws – it seems a bit surprising to have the fourth-ranked team in the country draw a referee crew that ranks in the hundreds. Referee Nate Harris is ranked 106th nationally, Tom O’Neill is 157th and Casey McClellan is 172nd. 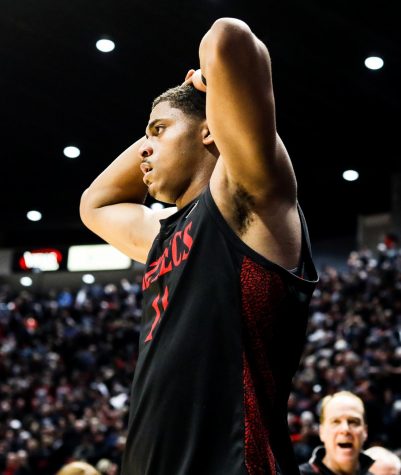 Junior forward Matt Mitchell is in disbelief after a call went against the Aztecs’ way during their 66-63 loss against UNLV on Feb. 22 at Viejas Arena. Photo by Kareem Jones.

Obviously, no game is called perfectly, but the calls both ways on Saturday felt a bit more questionable.

For the Aztecs, there were a few calls they would’ve hoped to have seen gone their way.

With under three minutes to play, they were down 58-51, and Mitrou-Long nailed a floater for the Rebels over Mitchell, who was looking for a charge as he fell down as he made contact with the Rebels guard, as the shot clock expired.

No whistle was blown.

Then with under two minutes left and the Aztecs down 62-56, Mitchell attempted to drive the lane on a spin move. He felt he was hit as he lost possession of the ball.

No whistle was blown in the Aztecs’ favor. Instead, it was a call against Flynn on the rebound.

Those two calls didn’t win or lose the game for the previously undefeated team, but calls like that are ones the Aztecs would have wanted, especially when the ending result is a loss.

“College basketball is a hard game to officiate,” Dutcher said. “Both teams probably felt there was a call that could have gone their way, and it didn’t. That’s just college basketball.

“The team doesn’t get caught up in that. I tell them let me worry about it. Like all coaches, I’m trying to work (with the referees) for a call. They’re not perfect, and some calls I don’t think they get called right, I go back and watch tape and they are right … When you lose, you would’ve hoped you would have gotten a call or two more, but that didn’t happen.”

3. Aztecs trail at halftime for only the fourth time all season

This time the Aztecs didn’t.

SDSU went into the locker rooming trailing the Rebels by 12 points, which is the largest deficit of any game the team faced inside of Viejas all season.

“I told them at halftime (trailing) would be good for us,” Dutcher said. “It’s a good moment for us to make adjustments to try to get more on the same page. Offensively, I thought we missed a lot of good shots in the first half.”

When a media timeout was called with 3:50 left in the first half, the Aztecs went nearly eight minutes without a field goal.

Mitchell said the team went to a rough stretch offensively – just like any team does.

“For us, we were just missing shots,” Mitchell said. “We weren’t connecting on offense as well as we should’ve been – as well as we’ve been shooting all year.”

The Aztecs play their final home game of the season next Tuesday for Senior Night. Seniors KJ Feagin, Yanni Wetzell and Nolan Narain will be honored in a pregame ceremony.