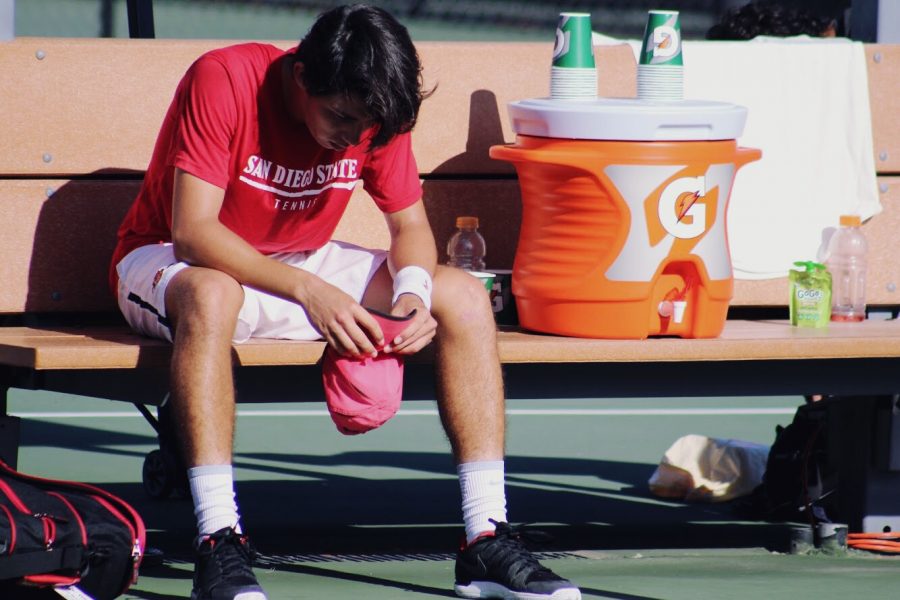 Just like every other spring sport in the Mountain West, the San Diego State men’s tennis team saw its season end before it began due to the COVID-19 pandemic.

Mountain West Board of Directors released a statement on March 12 stating that they “(have) now officially canceled all remaining spring sports competitions and MW championships.”

At 5-5, SDSU had begun to hit its stride by winning three of its last four games with No. 8 Stanford set to visit the Aztec Tennis Center on March 25.

Then, the team got the call.

Head coach Gene Carswell recalls how the Aztecs reacted to the news that their season got shut down.

“My guys were shocked,” Carswell said. “We came into this season at the start of the academic year set to work hard.”

The sentiment was felt equally amongst the players as senior Rafael Gonzales told The Daily Aztec the reaction from the team was a somber one.

“We were really upset and disappointed with the decision,” Gonzales said. “We were heading in the right direction and the team was getting very confident about the Mountain West Championship.”

It was not the only piece of stunning news the team would receive. Just a week after the initial report, an email sent by SDSU President Adela de la Torre accelerated the move-out process for all students.

The men’s team is different from other SDSU sports teams, as they have many foreign players on their roster from countries such as France, Finland, Australia, Spain and Germany.

For freshman Jules Auffray, a native of Hyeres, France, the move was a double-edged sword as he got to return to France to see his family but had to leave his teammates.

“I was sad to leave my teammates that early because I have a really good connection with pretty much everyone,” Auffrey said. “But also being a foreign student is sometimes hard… I was happy to go back to France and see my family and friends.”

The team can still practice amongst themselves if they choose to, but it will be harder with the Aztec Recreation Center temporarily closing.

With the Aztec Tennis Center closing as part of the ARC, the tennis team has lost its main court to practice on with Gonzales saying the team “have not been able to practice at all.”

However, moving forward, Carswell believes there are other ways to practice.

“I think some guys are gonna get a little stir crazy,” Carswell said. “I can see some people go out on their own and hit some balls around at a public court.”