Candidates for VP of financial affairs, executive VP and president face off in second day of debates 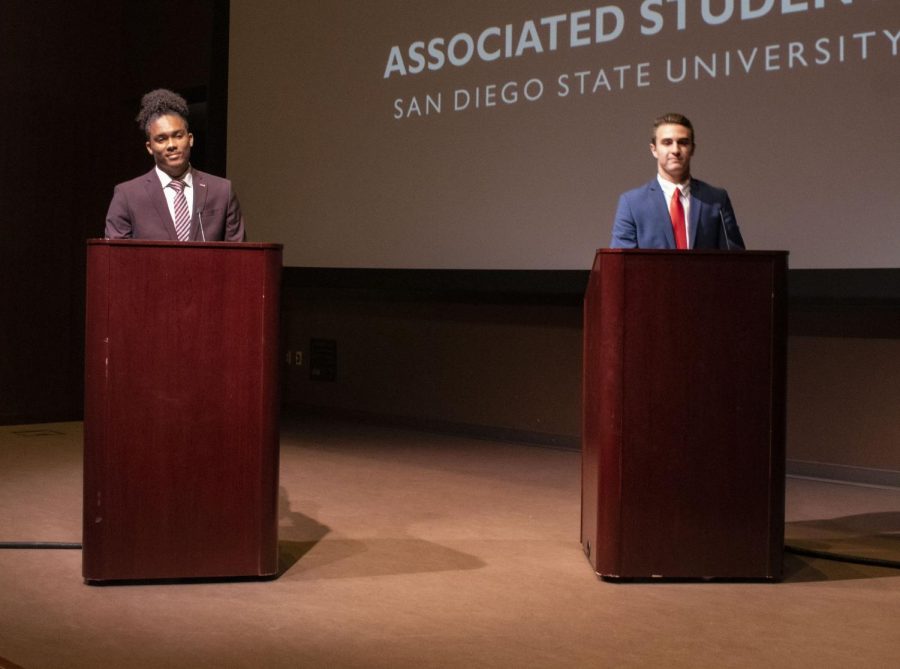 Candidates for vice president of financial affairs, executive vice president and president gathered to debate in the theatre at Montezuma Hall on March 18. With the campus reduced to virtual classes and students required to leave their dorms due to Covid-19 precautions, the debates had no audience but was streamed online for students. 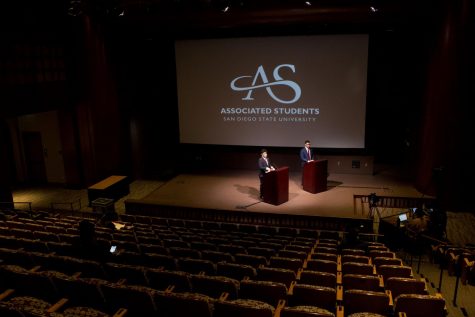 The race for this position was between David Gamble and Victor Penera.

Gamble noted his experience by saying he serves as a representative on the Campus Community Commission and as a student-at-large on the Financial Affairs committee. Penera has executive experience through the Tijuana Home Build, which he said helped him connect with the campus community.

Candidates were asked about their plans to foster change on campus without imposing additional fees, such as the ones narrowly approved last fall concerning increased psychological services and new identity centers.

“These are resources that students need but frankly, students shouldn’t have to pay for them,” Penera said.

Gamble said he hopes to be more transparent with how the university spends its money. He cited this as a point of frustration among students, who give the university thousands of dollars but don’t always see where that money goes.

“Most students don’t exactly know where their money is going and feel SDSU is trying to make money from them,” Gamble said.

Both candidates mentioned that using any unallocated funds to ensure students don’t have to pick up extra costs will be a priority. They also said they want to involve students in any decisions that will impact them while keeping their feedback in mind. 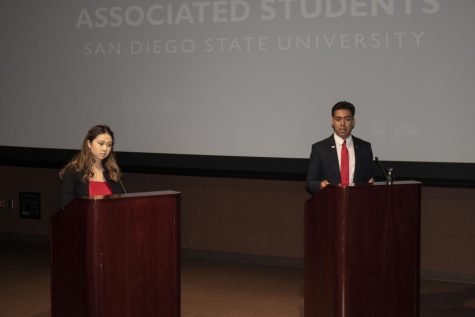 This match was between Ubaldo Martinez and Isabella Martelino. Martelino’s past experience includes serving on a committee for Campus Life Council, acting as a representative for undeclared studies on the university council, as well as working in Greek Life and participating in cultural programs. Martinez served on the Aztec student board, homecoming executive committee and the Greenfest executive committee.

Candidates were both asked what top priorities they would like to see the administration keep in mind when it comes to the development of the Mission Valley satellite campus.

“I will work to hold Mission Valley accountable on their promises of no extra student fees, 10% allocation for affordable housing and sustainability,” Martelino said.

Martinez also expressed interest in sustainability and saw it as an opportunity for faculty and staff to be involved in the development of the project in a way that translates into job experience.

“I think a lot of what’s going on with the Mission Valley campus is we’re reaching (out) to a lot of independent contractors when our staff is capable of doing these exact things,” Martinez said.

The debates concluded with the presidential debate between Christian Holt and Steven Plante. In the opening statement, Plante began by demonstrating how his candidacy was different from his opponent’s.

“Today, you will not see an actor (or) any robotic responses,” Plante said. “You will see a genuine student who is here to help and listen to what you have to say.”

Plante then went on to criticize Holt for working with faculty and administration, which Holt refuted.

“There is one principle that’s really important for this position and that’s shared governance,” Holt said. “My opponent thinking that me, sitting on task forces or committees with faculty, as serving the university is absurd.”

Holt was asked about the effectiveness of the presidential Student Activities and Safety Task Force that he sits on and how it best serves student needs. The task force was established last semester in an effort to promote safety among student organizations, namely, Greek life following the death of an SDSU fraternity pledge. He cited multiple members from student organizations that also serve on the committee and the importance of having representatives from different organizations working together.

“An A.S. president needs to have good relations with all entities on campus,” Holt said. “It doesn’t mean that they favor them; it means they have the relationships to get things done in office.”

Plante served as the Interfraternity Council president last year during the temporary suspension of all IFC chapters following Dylan Hernandez’s death. Plante was asked about the lack of communication and transparency between the IFC and The Daily Aztec during these events and how he would ensure transparency as president.

Plante said the lack of communication came from advice he received from advisors due to the confidentiality of the investigation in question.

“I legally had an obligation not to respond to any media and that is still the case to this point,” Plante said.

Candidates were also asked questions online by viewers. One of them asked how they planned to support and protect LGBTQIA+ students.

Plante proposed setting up a committee that involves all types of students and making sure they know they have resources available.

“I want to make it so that people understand there is a resource center here for them,” Plante said.

Holt replied by saying he practices using inclusive language and participating in community events when he can.

“Part of being an ally is being there,” Holt said.

A.S. voting will occur online from March 23 to 26. Students will cast their votes through the web portal system.