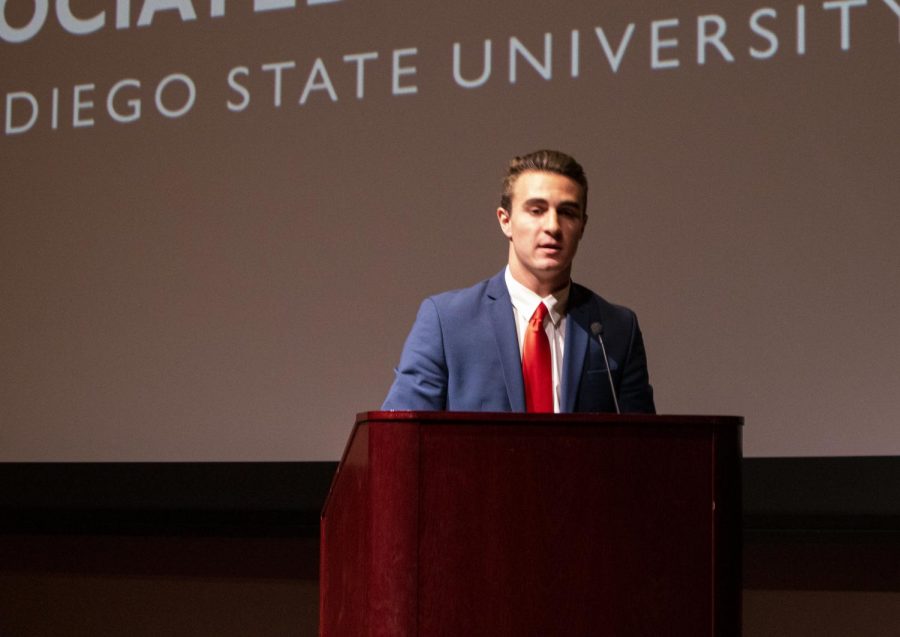 Interfraternity Council President and A.S. presidential candidate Steven Plante issued an apology to the campus community after it was discovered he used a homophobic slur in a GroupMe message in Feburary.

Associated Students presidential candidate and Interfraternity Council President Steven Plante issued a statement Sunday night apologizing for his use of a homophobic slur in a GroupMe message to celebrate his 21st birthday.

A screenshot of the message was released anonymously to The Daily Aztec, but Plante confirmed it was him who sent the message.

The message featured the slur, along with Plante asking people to “blackout” with him. It was sent in a Pi Kappa Alpha, commonly known as Pike, fraternity GroupMe on Feb. 8. 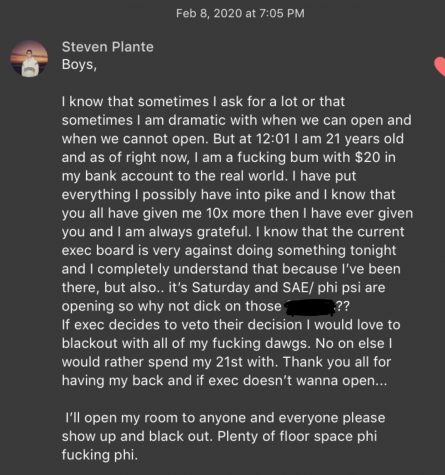 “I know that the current exec board is very against doing something tonight … ” Plante said in the message. “But also — it’s Saturday and SAE/phi psi are opening so why not dick on those (homophobic slur).”

Plante said the slur was a regretful choice of words and not representative of his overall character.

“I understand how some of my language may be seen to have offensive implications for some and I wholeheartedly apologize if anyone in any way was offended,” the statement says. “It is derogatory verbiage that myself and many other individuals use in the wrong context.”

A Tough Year for Greek Life
Plante led the IFC through a treacherous year for Greek life, including the death of SDSU freshman Dylan Hernandez after he attended a fraternity event last November. All IFC chapters were temporarily suspended as a result of the tragedy.

Two presidential task forces were established following the incident in an effort to create a culture change among Greek life – one focused on alcohol and substance misuse and the other is looking into safety in student life. The task forces are set to propose next steps by the end of the year.

Pike is currently under interim suspension, according to SDSU’s student life and leadership webpage, meaning they are already under some form of investigation or elevated status for previous violations.

Sigma Alpha Epsilon, or SAE, was referenced by Plante in the message as “opening” that same night, which the Pike executive board was against doing, according to the message.

SAE is currently under “probation with stipulations” until October of this year, according to the Student Life and Leadership website.

When The Daily Aztec received a screenshot of the message on March 19, it had 49 likes from members in the SDSU Pike chapter, Delta Kappa, message board.

“Thank you all for having my back and if exec doesn’t wanna open … I’ll open my room to anyone and everyone please show up and black out,” Plante said.

“The intention behind relaying this message was to gather my peers and bring them together in our private living spaces and celebrate my 21st birthday,” Plante said.

Political Implications
Armando Sepulveda II is running for vice president of external relations on the same slate as Plante, Serve SDSYOU. He said Plante’s choice of words was unfortunate, although not indicative of his character.

“It could have been worded differently, but I know Steven,” Sepulveda II said. “I know how supportive he is of the LGBTQ community.”

Voting for A.S. elections kicks off Monday, March 23 and Plante is running against Christian Holt for the presidency.

Dr. Nathian Shae Rodriguez is a journalism and media studies professor who identifies as queer. He has done research on LGBTQ media representation and portrayals of other minority groups.

“Research, including my own, has shown that homophobic slurs, along with other taboo discourse, among fraternity-aged men often occurs because they have not yet acquired any structural status to display power and dominance,” Rodriguez said.

Brandon Lim is a journalism and psychology senior and a member of the LGBTQIA+ community. He said under no circumstances should that word be used because it perpetuates discrimination among the community.

“The fact that it is a student leader who is supposedly advocating for all students within the highest position on campus, that kind of language doesn’t fly,” Lim said.

Sepulveda II said he stands by his fellow slate member, and questioned the motives behind someone coming forward with information about Plante this close to the end of the A.S. election cycle.

“If this came out prior to two days ago, I can see why this would be a pressing matter, but it seems to me that whoever released this information was just sitting on it waiting for the opportune moment to create a story,” Sepulveda II said. “That doesn’t sit right with me.”

Lim said the choice of words is an indication of poor character but hopes Plante can use this as a learning experience.

“I would hope that he could grow from the experience,” Lim said. “Apologies are one thing, but a change of behavior is an expression of the apology in action.”

In the statement, Plante offered a branch to those potentially affected by his words.

“I am ready and able to sit down and discuss in person with anyone who feels attacked or disrespected by my actions,” he said. “This is not who I am and I acted out of character on my 21st birthday as many of us do, unfortunately.”

His full statement can be read in full here: 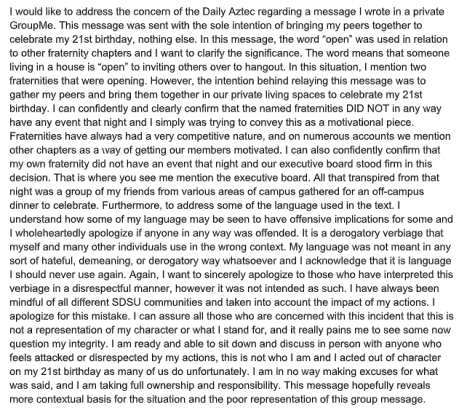 Students may vote in the A.S. elections through their webportal accounts between March 23 and 26.

Editor in Chief Bella Ross contributed reporting to this story.