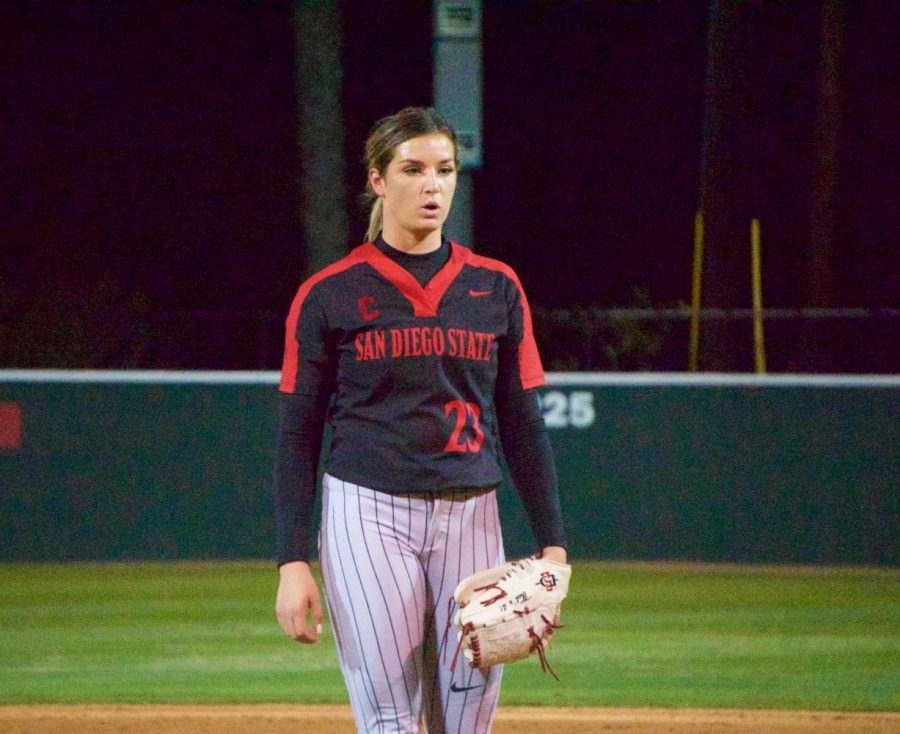 Junior pitcher Maggie Balint gets ready to throw her next pitcher during the Aztecs' 3-0 loss to BYU on Feb. 13 at SDSU Softball Stadium.

It’s been almost two weeks since the Mountain West Board of Directors made the decision to cancel all remaining spring sports competitions due to concerns regarding COVID-19.

The board released a statement stating, “The Mountain West Board of Directors has now officially cancelled all remaining spring sports competitions and MW championships.”

Athletes from all sports are hoping and wishing that this is just a bad dream. They hope that one day they’ll wake up and the nightmare will be over.

As more time has passed, these athletes have slowly come to grips with this new reality.

She described the news as “jaw dropping.”

“I was in complete shock along with the coaching staff and team,” Balint said via direct message. “I couldn’t stop thinking about how hard our team has worked this offseason, and the hurdles we overcame.”

“The first thing that went through my head was the seniors,” Van Wyk told The Daily Aztec. “They’ve been working so hard, and we talk all the time about how fast it goes and wanting the senior season to be their best. I just thought what a horrible way to end their careers.”

The hardest part is dealing with the “what ifs.”

The Aztecs started the season with a 17-11 record. They were projected to finish second in the Mountain West preseason poll.

Van Wyk’s message to her team has been to turn away from the negative and work on finding another purpose.

“I was trying to get them to focus on looking for volunteer opportunities and ways they could help out,” Van Wyk said. “This might be giving blood or volunteering at the food bank or just some way to repurpose their energy.”

The grit and hard work this Aztec team put in is what gave them hope this season would be a memorable one.

Although this season is done, Van Wyk still feels her team can take away positives moving forward.

“Hopefully we can look back at this as one great big do-over,” Van Wyk said. “We’ll get a chance to get that season back, and we’ll be able to take what we learned from the half season we had and apply it to the next.”

Balint said the standards the team set will continue on.

“This season was a rebuilding year,” Balint said. “Setting new standards, a new mindset, buying into a new program and trusting the process.”

All that can be done now is focus on remaining healthy. These athletes will put in their own personal work in order to better themselves for next season.

“We’re meeting Monday, Wednesday and Friday in the mornings on Zoom to have a workout with them,” Van Wyk said. “It’s not mandatory, but it gives them ideas and keeps faces in front of each other.”

Balint said the coaches want their athletes to remain safe during these unknown times.

“The coaches apologized for the loss of a season and told us to be safe, stay inside and take all precautions,” Balint said.

Student-athletes are juggling lots of questions right now in terms of what exactly this means, especially for seniors who lost their final season.

“The team is pretty heartbroken right now,” Balint said. “Seniors are trying to figure out if they’re coming back or not amidst all this.”

The NCAA announced that an extra year of eligibility will be made available to student-athletes in spring sports, meaning seniors who never played their full season will have the option to return for another year.

The Division I Council Coordination Committee released a statement stating, “Council leadership agreed that eligibility relief is appropriate for all Division I student-athletes who participated in spring sports.”

Van Wyk said this is reassuring news for her team.

In all this free time that will no longer be spent at practice or games, the team will constantly be thinking of questions about how something like this could ever happen.

“There are a lot of unknown answers to our questions at this time,” Balint said. “There is a lot of stress and worry for all student-athletes.”

“I would just hope that everyone is taking this seriously because the longer they don’t, the longer we’re going to be quarantined,” Van Wyk said. “I hope people understand the seriousness of it because it’s not going to go away until we do.”