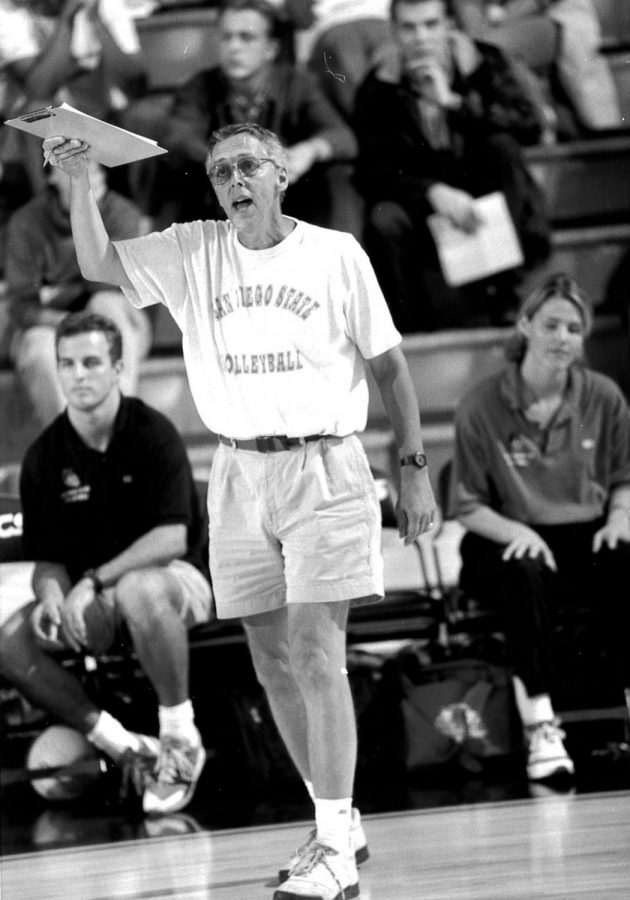 Jack Henn led San Diego State to its only Division I national championship in school history.

Jack Henn, who played men’s volleyball at San Diego State and then later coached the 1973 team to the university’s only Division I national championship, passed away on March 22 at the age of 79 after a long battle with cancer.

Henn began his collegiate career in the 1960s and returned on two separate occasions to be part of the coaching staff.

The current SDSU women’s volleyball head coach Brent Hilliard, who got to know Henn over the years since his college days, said he impacted a lot of lives as an Aztec.

“Jack Henn made a difference in so many people’s lives during his tenure at San Diego State,” Hilliard said in a press release. “I hope many will appreciate everything he did for the sport. It is amazing to reflect on some of his greatest achievements as a player, coach, leader and perhaps best of all, a mentor to so many young people.”

When Henn was in his second stint at SDSU, Hilliard got the opportunity to play against him as a player for Long Beach State in the early 1990s.

Hilliard, who was a four-time All-American, said that was how he first got to know Henn and was disappointed when he heard the news of his passing.

“I was really sad,” Hilliard told The Daily Aztec. “During my tenure playing college volleyball at Long Beach State, I competed against his teams for four years. His teams were always really good and he seemed like a genuine guy, just from knowing him from that player-coach perspective.”

Following both of their collegiate playing days, each competed in the Olympics for the United States — Henn in 1964 and 1968 and Hilliard in the 1992 Olympics.

Although Hilliard did not get to talk to Henn about playing in the Olympics, he said he was able to talk to Henn while both were in San Diego with the help of Hilliard’s college coach.

“My time spent with Jack was mostly as a visiting player when they would visit Long Beach State and then a little bit after I got out of the college game when I came down to San Diego to train with the USA (Olympic) Teams,” Hilliard said. “My old coach at Long Beach State, Ray Ratelle, and Jack were really good friends.”

Hilliard remembers when Ratelle and Henn went to dinner with Mark Warner, who was on the 1968 SDSU men’s volleyball team that won the Collegiate National Championship (Aztecs were not Division I yet) and later coached with Henn.

“A really good highlight for me was when I got to meet them in Mission Valley and have dinner with both of them and Mark Warner,” Hilliard said. “(Henn is) the face of San Diego State that I always put with volleyball and the city of San Diego, too. I assumed it was Jack’s town. Now that I’m down here and coaching, it feels like an end of an era.”

When people look back at great coaches at SDSU, most think of football’s Don Coryell and men’s basketball’s Steve Fisher. That may be due to the fact SDSU has not had a Division I men’s volleyball team since 2000.

But for Henn, he is the only SDSU coach to be named an NCAA Division I National Champion.

Hilliard said it puts him on another level.

“It puts him on a pedestal,” Hilliard said. “The fact of the matter is he is a national champion, and there is not another coach in the department that can say that, past or currently. It’s really unique and I’m sure he was very proud of it and you can tell people that volleyball has a national championship, which is rare.”

Henn will always be attached to SDSU as his 1973 team is enshrined in the Aztec Hall of Fame.

But to be able to come back and coach not once, but twice, shows how much he loved being part of the SDSU family.

“That’s something he dearly loved,” Hilliard said. “People won’t go back to situations that they are not fond of. That just meant he had a tremendous amount of value and San Diego State volleyball. The fact that he did it twice tells me he really loved it and really appreciated his time there.”