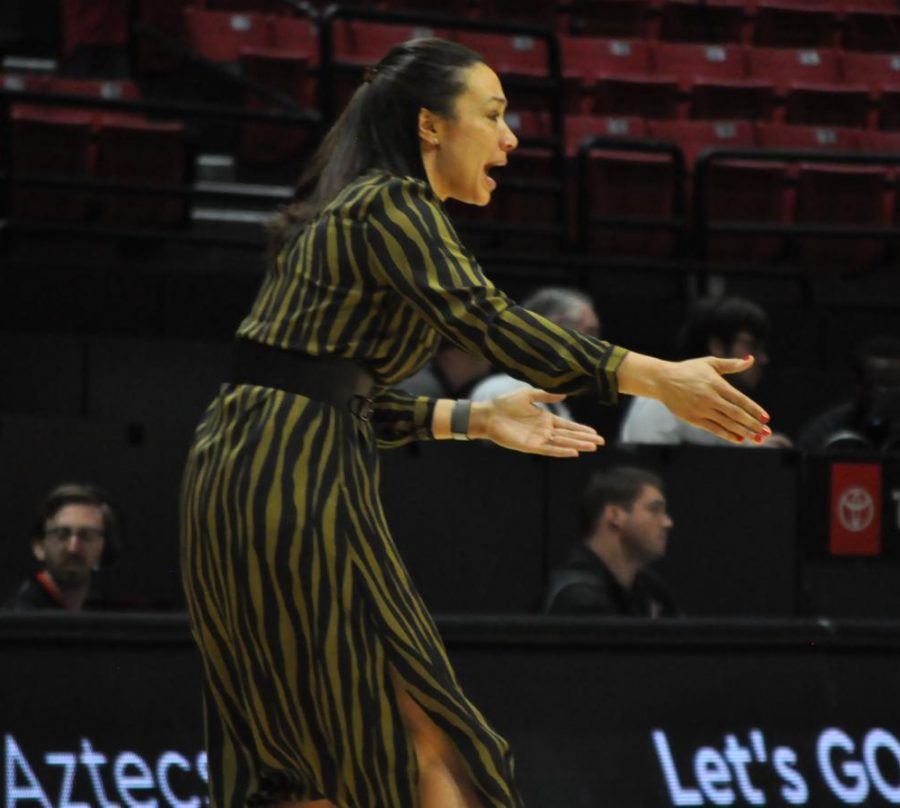 Head coach Stacie Terry-Hutson instructs her team during the Aztecs' 51-49 loss to Air Force on Feb. 8 at Viejas Arena.

Terry-Hutson will continue to serve her duties as head coach for four more years — keeping her at the Mesa until the end of the 2023-24 season.

The Aztecs (14-17, 9-9 Mountain West Conference) had their best finish under Terry-Hutson in 2019-20, tying with the UNLV Rebels for fifth place in the conference.

“Coach Terry-Hutson treats me like her own daughter and I know that she always has my best interests in mind and wants me to be successful,” freshman guard and forward Isabela Hernandez told The Daily Aztec. “I appreciate that she holds our character to a high standard and continually reminds us of the important things in life.”

The San Diego native wrapped up her seventh season on March 1 when the Aztecs exited out of the first round of the MW tournament, falling in overtime to the Utah State Aggies.

SDSU finished as a top five conference team in field goal percentage on both sides of the floor.

“Coach Stacie is more than a coach to me and my teammates,” junior center Naomi Ekwedike said. “She holds us dearly to her heart and wants the best for us. She always says that her relationship with us is more than basketball.”

As a unit, the Aztecs shot 41.7%, which was a program best since the 2013-14 season. That statistical category has risen in five consecutive seasons.

“I’m pleased to announce an extension for coach Terry-Hutson,” SDSU Athletic Director John David Wicker stated in the press release. “This was a decision that was weighed carefully and with discussion from many different stakeholders. The growth in the overall program is readily apparent and I’m confident coach Terry-Huston will continue the on-court progress made over the last past couple of seasons.”

The Scarlet and Black posted the second-best 3-point field goal percentage in the conference by shooting 35.8% beyond the arc.

Since being inducted as head coach in 2013, the Aztecs have not managed to finish a season with an overall record above .500.

The Aztecs’ nine wins in conference play are tied for the most under Terry-Hutson since her first season. She is currently the second-longest tenured coach in program history behind Beth Burns.