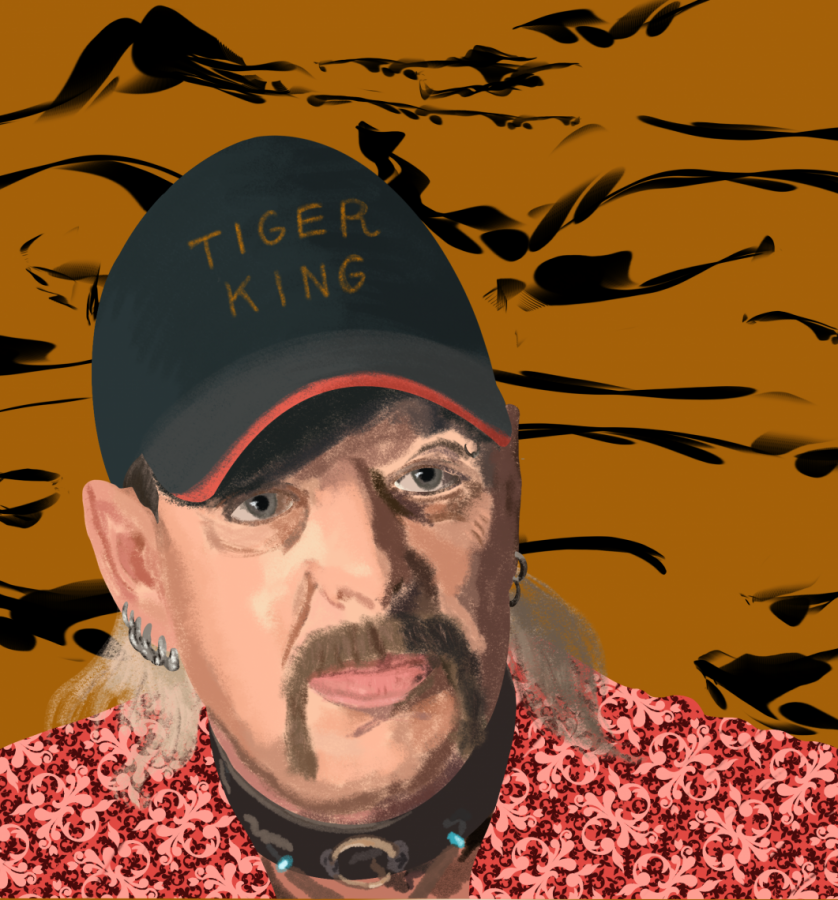 Hey, all you cool cats and kittens! Need something to watch while you’re social distancing? Well, look no further than Netflix’s new true-crime series “Tiger King: Murder, Mayhem and Madness,” which has taken the quarantined world by storm.

The series chronicles the rise and fall of the “Tiger King,” the eccentric former zoo owner Joe Exotic (née Maldonado-Passage), as he struggles to keep control of his zoo. Although Exotic is the main character, the show focuses on the moral question of whether people should be allowed to own tigers.

As a self-proclaimed “gay gun-carrying, redneck with a mullet” with a larger-than-life personality, Exotic is a person who seems too weird to be true. As the former owner and founder of the Greater Wynnewood Exotic Animal Park in Garvin County, Oklahoma from 1999 until 2018, he owned more than 187 tigers, along with an assortment of other wild animals.

Outside of owning a zoo, Exotic has been involved in other ventures to build exposure for his zoo and subsequently increase his popularity. This includes his career as a country music singer, his failed reality TV show and his unsuccessful 2018 Oklahoma gubernatorial campaign.

He became a significant figure in the animal world, not only for the rumors about him breeding and exploiting tigers but for the many outlandish and disturbing events that occurred at his zoo.  Some of the events were Exotic’s employee getting their arm bitten off by a tiger through a fence and Exotic’s husband, Travis Maldonado, accidentally shooting himself in the head. Following Maldonado’s tragic death, Exotic held an awkward funeral for his former husband, which included him performing his song “This Old Town” and telling stories about Maldonado’s testicles in his eulogy.

Some other shady acts the show sheds light on are Exotic’s daily routine of feeding his tigers and employees with expired meat from a Walmart truck and paying his workers below minimum wage. It’s also implied by the show that Exotic set a fire in his office, burning down the building and killing seven alligators, so federal investigators wouldn’t have the chance to look through his hard drives.

Despite his obvious wrongdoings, Exotic’s aura and personality made people fiercely loyal to him, including his numerous young husbands. Exotic enjoyed a polygamous marriage with two significantly younger men named Travis Maldonado and John Finlay. In his shirtless interview, Finlay revealed Exotic lured them into relationships by buying them expensive things and feeding their meth addictions. To make things stranger, both Maldonado and Finlay would often cheat on Exotic with the female employees at the park, forcing Exotic to admit that he fell in love with straight men.

In his time as a zoo owner, Exotic was targeted by the United States Department of Agriculture, People for the Ethical Treatment of Animals and numerous animal rights activists, all of whom used his antics as ammunition to shut down the zoo. However, Exotic’s most vocal enemy is his arch-nemesis, animal rights activist Carole Baskin.

Baskin is the founder of Big Cat Rescue sanctuary and a maniacal lover of tigers. Baskin’s tiger collection is legally classified as a sanctuary and is endorsed by PETA, but she has a disturbing prior history with breeding and mistreating cubs. According to the show, she doesn’t pay any of the volunteers who work at the sanctuary and usually, they’re forced to work long hours every day and on holidays such as Christmas. Although Baskin refutes these claims, in episode 2, “Cult of Personality,” her volunteers admit to working extensive hours despite not being paid employees.

Besides her controversial sanctuary, Baskin is often ostracized from the circle of exotic animal owners because of the widespread belief that she orchestrated her former husband’s disappearance. In 1997, Carole’s multi-millionaire husband, Don Lewis, mysteriously disappeared, and the most popular theory is that she murdered her husband and fed him to their tigers. Although this theory sounds a bit ridiculous, Lewis’ daughters, ex-wife and many of his former associates believe Baskin was involved in his disappearance, according to the documentary.

Baskin’s ultimate goal was to shut down Exotic’s zoo and shed a light on existing tiger abusers. Conversely, Exotic believed Baskin was a hypocrite who wanted control of his tigers so she could become the most prolific tiger collector. Both sides fiercely defended their tigers and their kingdoms, but it soon became clear their focus shifted from the tigers to their own personal vendettas.

As their rivalry got increasingly nasty, Exotic verbally threatened to kill Baskin on a daily basis and released his diss song, “Here Kitty Kitty,” which portrayed a Carole Baskin look-alike feeding body parts to a tiger in the music video. On the other hand, Baskin used her immense wealth and resources to take him down, leading to numerous prolonged court battles and eventually a successful $1 million copyright lawsuit against Exotic. Eventually, their feud would reach an incredibly bizarre breaking point, but I don’t want to spoil it. You’ll need to watch “Tiger King” for yourself.

Besides Exotic and Baskin, the series gives a look into the interconnected world of exotic animal owners, each with their own bizarre personalities. This includes Bhagavan “Doc” Antle, the owner of Myrtle Beach Safari and suspected polygamous cult leader; former drug kingpin (and the inspiration for “Scarface”) Mario Tabraue; and ex-con entrepreneur Jeff Lowe, a lowlife who pimps out his tiger collection to lure women.

“Tiger King” is a certifiably insane take into the highly lucrative and unusual world of private zoos. At times, the show seems unbelievable, yet it’s so crazy you can’t look away. While watching, it’s easy to focus on all the weird characters, intense rivalries and real-life consequences of the exotic animal world, but it’s important to remember that the real victims are the tigers. The series emphasizes this fact, ending on a somber note revealing “5,000 – 10,000 tigers live in captivity in the U.S. Fewer than 4,000 tigers remain in the wild.”

This show is a perfect distraction from the chaos of the COVID-19 virus, and it may be Netflix’s most phenomenal and intriguing series yet.