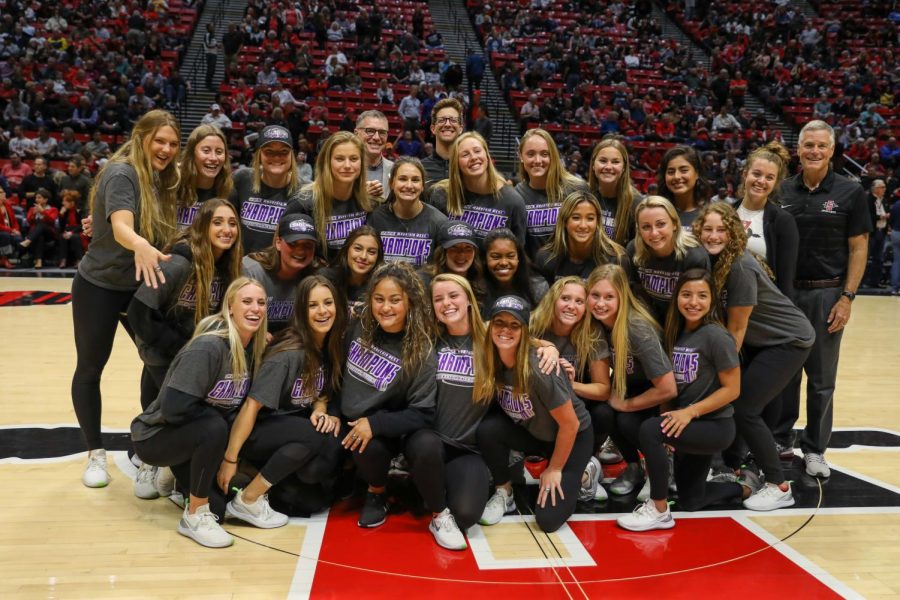 The Aztec swimming and diving team was honored during halftime at a men's basketball game for winning back-to-back Mountain West titles.

San Diego State swimming and diving swept the 2020 Mountain West Conference end-of-year honors on March 31, according to a press release.

With the sweep, the Aztecs became the second program in conference history to earn all four end-of-year honors in the same season.

“It was quite an honor,” Shrader said. “I was so happy for the program and for all the kids on the team because those awards represent everybody on the team. Roland (McDonald) and I’s award was really special and this team is really special.”

The Vetlanda, Sweden native credits her success towards developing a new mentality heading into the season.

“I would credit my mindset for my success this season,” Thormalm said. “This year I started the season with a different mindset than before, and therefore it felt extra special to see that the hard work paid off. I think I realized that it takes so much more than just physics to become a fast swimmer.”

Thormalm’s 200-meter medley team not only qualified for the NCAA Championships, but they also set an all-time conference record and SDSU record with a time of 1:36.30.

Lechuga Gonzalez won Mountain West Diver of the Year after placing first at the MW championships on the three-meter platform dive with a score of 382.35 and also earned top-three finishes on two other springboard events.

She also became the only diver in the Mountain West to qualify for NCAA Championships in the one and three-meter platform dive this season.

Lechuga Gonzalez credits her success this year to feeling disappointed in not qualifying for the NCAA championships in the previous season.

“Last year even when I had a wonderful season, I didn’t finish it as I would’ve wanted,” Lechuga Gonzalez said. “I didn’t qualify for the NCAA championship, and this made me feel unsatisfied and wanting more. So this year I kept working hard, looking to be better every day in order to achieve what I wanted.”

The Swimming Coach of The Year award is the seventh for Shrader, which is the most for any coach in conference history.

“The good lord has blessed me with a bunch of great people around me to help me do my job to the best of my ability,” Shrader said.

The Diving Coach of The Year award is the second for McDonald in his tenth year on the Mesa and fifth overall in his coaching career.

The awards sweep caps off a successful 2019-20 season for the Aztecs, who won the 2020 Mountain West Swimming & Diving Championship and achieved back-to-back conference titles for the first time in program history.

“I couldn’t be more proud of them,” Shrader said. “They did a great job in the water and out of the water. It was so much fun coaching them. Every single swimmer and diver on the team were first-class, young ladies.”