Looking back at the 2019-20 women’s basketball season 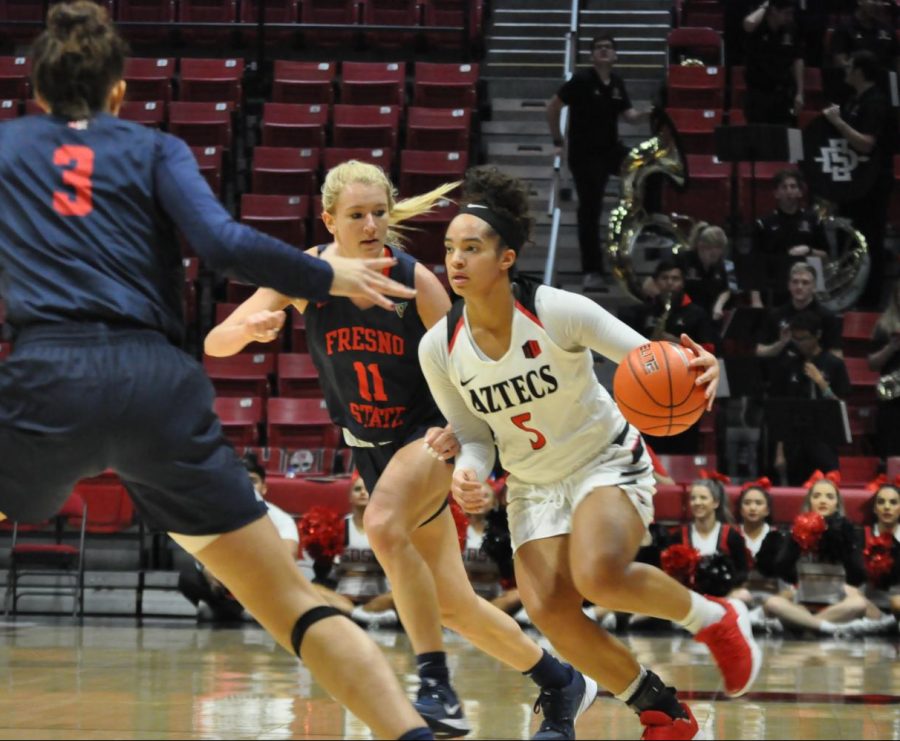 Junior guard Téa Adams drives to the hoop during the Aztecs' 65-60 loss to Fresno State on Jan. 15 at Viejas Arena.

by Breven Honda and Cristian Alvarez

San Diego State women’s basketball ended the season on March 1 in the first round of the Mountain West Conference tournament as a No. 6 seed.

The Aztecs finished 14-17 overall and 9-9 in MWC play, which tied UNLV for fifth place.

Head coach Stacie Terry-Hutson said the goal this season was to get better every day in different aspects.

“I thought it was a season of growth in so many different areas,” Terry-Hutson told The Daily Aztec. “I thought we grew a lot with our guard play, the way we moved and shot the ball and the flow of our offense. And then finding out who we were as a defensive unit and making some transitions mid-year to do a better job in transition defense and rebounding.”

Here are four observations from this season.

“We spent a lot of time on skill development,” Terry-Hutson said. “We spent more time on it throughout the season. But to be able to put time in the gym outside of practice is a testament to our players and how hard they work which is a reason why we were able to make those strides.”

The Aztecs also managed to find their rhythm from downtown.

Sophomore guard Sophia Ramos said despite the team making a little more than one-third of their shots from long range, their main goal was to drive to the basket.

“I think the three ball is for sure our secondary option,” Ramos said. “I don’t think for a lot of us that’s the first shot we want. We want to get downhill, try to create mid-range shots and layups.”

The duo of Ramos and senior guard Taylor Kalmer played a large part in the Aztecs’ three-point shooting. They combined for 82 threes, which was nearly half (49%) of the team’s total triples on the season.

Ramos said the team had to work more on their outside shots than inside.

“We didn’t have to necessarily do extra stuff on the layup or floater but we did the extra stuff on the three-point shot which translated to the game easily, which allowed for us to be consistent from outside as well,” Ramos said, who averaged 32.2% from beyond the arc.

In addition to Kalmer and Ramos, a pair of trifectors between senior forward Monique “Mo-Money” Terry and freshman guard/forward Isabela Hernandez gave SDSU some open-look threes.

Hernandez led the team in three-point shooting with 43.1%, which was the second best three-point field goal percentage in a single season.

Terry-Hutson said Hernandez was valuable to the team with her scoring.

“It was great to have another offensive threat on the floor,” Terry-Hutson said. “She is going to continue to improve as she gets stronger and gets more experience. Her ability to shoot the ball only adds to our offensive arsenal.”

Terry was right behind her shooting 40.3% from distance. The 27 3-pointers from the San Antonio, Texas native was the third most on the team.

“Obviously it’s a terrible thing when one of your teammates gets hurt,” Dornstauder said. “It was an interesting thing to see because Monique was that backup and she filled the role I think better than anyone expected her to. I personally think she really stepped up and clicked super well with the team. I think she flipped our team around.”

2. Trio stands out with historic accolades

Dornstauder, Kalmer and Ramos each made their mark this season.

Kalmer and Ramos, who combined to score 928 of the team’s 1,975 points during the season, proved to be quite the dynamic duo in guard play across the MWC.

The duo were in the conference’s top ten in multiple categories, including scoring and minutes played.

Kalmer played 1,178 minutes for the Aztecs, which was the most on the team, the conference and ranked seventh-best in the nation.

“We didn’t have a ton of depth this season so they had to be that successful for us,” Terry-Hutson said. “It’s also part of the ability to understand and maintain their bodies for the entire season. Job well done to them and the training staff.”

Ramos landed the only spot for SDSU on the MW All-Conference team while Kalmer was an honorable mention. It marked the first time under Terry-Hutson that two Aztecs received conference honors.

Kalmer had 25 consecutive games with at least 10 points, which is the longest streak by an Aztec in the Mountain West era (1999-present). She arguably had one of the most profound seasons in recent memory.

After playing three seasons at Oregon State and in the 2018 Elite 8 for the Beavers, she transferred to SDSU and fit into the Aztecs’ style of play, leading the way in scoring, averaging 15.7 points.

Ramos said Kalmer was more of an “actions speak louder than words” type of player.

“She earned a lot of respect from us because we knew she was coming in with some experience as to what it was going to take,” Ramos said. “She was always in the gym doing extra work. It was really rare ever seeing her out of the gym. Those records that she got she deserves that because she puts in that work to get that.”

For Ramos, she picked up where she left off from her freshman year.

The 5-foot-9 guard averaged 14.3 points while also leading the Aztecs in four other categories: rebounds, assists, free-throw percentage and steals.

Despite having some similar statistics last season, Terry-Hutson said Ramos was able to adapt to her opponents.

“The main difference was everyone knew who she was her sophomore season,” Terry-Hutson said. “She didn’t take anyone by surprise. What I’m most impressed with is that she was able to do everything she was able to do knowing that she had the best defender on her.”

Ramos, who set career-highs in points and rebounds on two separate occasions, said an early season scoring lull became a blessing in disguise.

“I think for myself I struggled early finding a way to get the ball into the basket, which overall wasn’t a big issue for me because it allowed me to see the other aspects of my game,” Ramos said. “In terms of being able to pass, rebound, do the little things that help just as much as scoring does.”

In addition, Ramos posted the ninth-best free-throw percentage in program history after shooting 83.1% at the charity stripe, which ranked second in the conference.

Her best performance at the line came against New Mexico on Jan. 29 where she went a perfect 16-of-16 in a 75-74 victory with her final two free throws being the difference.

“She has been double-teamed or triple-teamed, but she has the ability to get to the basket and the free-throw line because she uses her stops and starts,” Terry-Huston said. “We look for her to distribute, score and manage us on the floor.”

Dornstauder proved to be one of the most efficient scorers to wear the Scarlet and Black.

Dornstuader, who wears No. 22, shot 54.9%, which ironically is the best field goal percentage in 22 seasons.

“Zayn is so gifted offensively and really skilled, I really wish we got her the ball more often,” Terry-Hutson said. “With what she was able to do with the ball, she set herself as one of the elite posts in our league. Her skill lets her finish at a high rate all the time.”

The 6-foot-3 added that she primarily worked on shooting more than the stats.

“I guess I really didn’t think about it,” Dornstauder said. “Most of my shots are in the paint or close. I kind of know that whenever I get the ball down low it’s like my job to put it in the net so that’s something I really focused on.”

3. Attendance and support for program rises

Terry-Hutson said she alludes the increase to people that work off the court.

“We got a lot of people that work behind the scenes to make that happen and this is a record that goes to them,” Terry-Hutson said. “I love to see all those faces inside Viejas Arena. There’s nothing better than having a home-court advantage. I was really pleased and excited to see people gravitating toward our program and seeing our young women work so hard.”

Dornstauder said having more spectators only elevated the team’s energy before, during and after games.

“It’s exciting for us when we get more fans,” Dornstauder said. “The more people we get out, the more support we get. It speaks to how we’ve been collectively seeing more and more fans as the season went on. It pumped us up just getting more support because it speaks to the way we’ve been playing too.”

In addition, a new single-game record was set when 5,320 spectators came out to watch SDSU edge out New Mexico on Jan. 29.

4. SDSU’s offseason off track due to pandemic, but will need creativity

Terry-Hutson said the goal over the offseason is to improve in every way.

“Our offseason goals are going to get faster, stronger and quicker,” Terry-Hutson said. “(We want the players) to get better individually so by the time we get back together we can work on those concepts.”

With the coronavirus pandemic and teams not able to practice collectively, Terry-Hutson said her coaching staff and herself will have to think outside the box.

“We are getting creative,” Terry-Hutson said. “We are doing Zoom workouts with our trainer sending the players some bodyweight stuff in their living rooms. We’ll have meetings once a week to stay on top of our academics and our social lives. This is a time to reset and focus on what’s most important – spending time with our loved ones.”

In addition, recruiting becomes a factor because players can not go on visits.

“We have to get creative in how we get in contact with our recruits,” Terry-Hutson said. “We’ve been doing a lot of Facetime calls and virtual stuff so they can see the campus.”

Despite losing Kalmer to graduation, SDSU will still have depth at the guard position with Ramos and junior guard Téa Adams.

Terry-Hutson said Adams, who will enter her fourth season next November, will be one player to look to have a higher motivation next season.

“She has been working on her game and you’re going to see a more motivated young lady as she approaches her senior season,” Terry-Hutson said. “She can do many different things and score on different levels. She will work on the three-point shot and she already masters the mid-range and we know she can get to the rim at any time.”