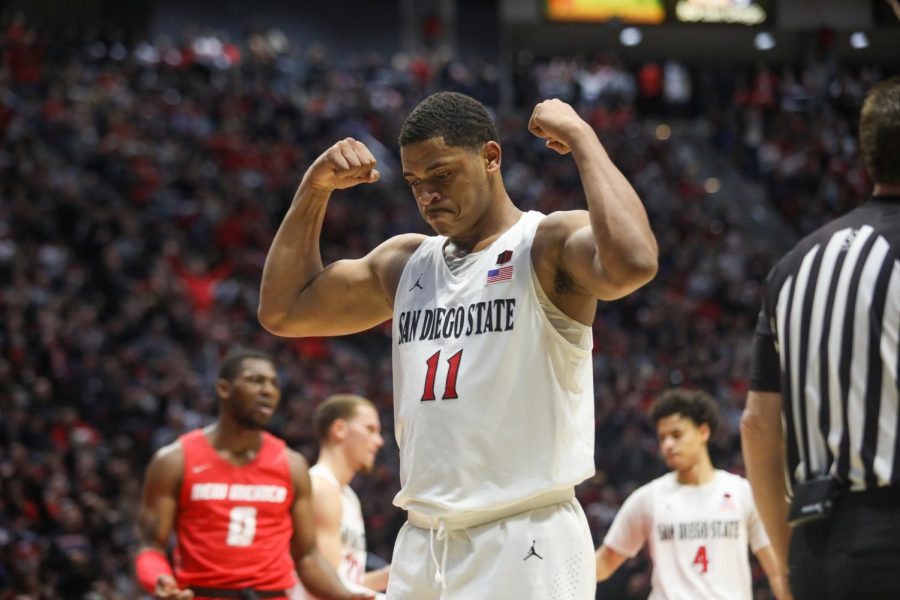 Junior forward Matt Mitchell flexes in celebration after a chance to complete a three-point play against New Mexico on Feb. 11 at Viejas Arena.

Mitchell interacted with Aztec basketball fans for an hour, answering various questions with the hashtag “#MattTakesOver.”

The Twitter takeover was part of the online series “Stay connected with the Aztecs,” which has featured SDSU athletes and coaches holding interviews and hosting Q&As amidst the coronavirus pandemic.

1. Mitchell’s favorite moments from the past season

Mitchell said a couple of his favorite moments included “the dunk” and beating Utah State at home on Feb. 1 — when Mitchell scored a season-high 28 points (including 24 points in the second half).

It was a great season– sad to see it end so soon and abruptly but it’s bigger than basketball right now.

Favorite highlights other than the obvious dunk was beating Utah State at home on Kawhi’s jersey retirement night. #MattTakesOver

The Riverside, Calif. native even added some humor about the memorable slam.

No. It’s a great feeling. I suggest next time they move out of the way.#MattTakesOver

Mitchell said if he were to give the photo of the dunk his own caption, it would be “Dead man walkin’.”

Mitchell went on to say the Aggies are among his top two favorite teams to beat, along with the Nevada Wolf Pack.

My favorite team to beat is Nevada– Utah State is a close second. #MattTakesOver

One of the more engrossing responses from the takeover was related to Mitchell’s basketball plans next season.

Next season and what it entails is a decision I will make later on. Still looking to get information and sit down with my family and coaching staff before making any decisions. #MattTakesOver

Mitchell’s answer suggests his consideration in regards to staying at SDSU for his senior season or playing professional basketball domestically or overseas.

The 6-foot-6 forward started the season off the bench as the sixth man but got his first start on New Year’s Day at home against Fresno State after sophomore forward Nathan Mensah was held out for the rest of the year with a respiratory issue.

Regardless of if Mitchell returns, he said next year’s team should establish an identity from the start.

I think that the team should focus on being the best version of them they can be. Every team is different and will always have a different path. If next year’s team stays the course then there’s a bright future ahead.#MattTakesOver

Mitchell said he’s familiar with SDSU commit and incoming freshman guard Lamont Butler Jr. The two played against each other in AAU.

I’m familiar with the class- I played with Lamont Butler in AAU years ago. #MattTakesOver

If Mitchell returns to SDSU, he could be reunited with the three-star recruit, who also hails from Mitchell’s hometown Riverside.

3. Mitchell talks basketball, his goals on and off the court

Mitchell said former Aztec Malik Pope is the most difficult player to defend. He added Jeremy Hemsley is the toughest SDSU defender he’s faced on the other side of the court.

Among current men’s basketball players, Mitchell said sophomore guard Adam Seiko has the talent to improve the most next season.

Adam Seiko. He has a lot of upside and he is one of the hardest workers on the team.#MattTakesOver

Whenever his basketball career ends, Mitchell said he wants to assist high schoolers academically and athletically.

I chose to be a history major because I like to teach and want to help young kids (high school) peak and be well-rounded including athletics.

But before he fulfills his career aspirations, he intends on playing professional basketball, using his dad as his inspiration.

My dad because I wanted to be able to live his dream out and play professional basketball one day at a high level.#MattTakesOver

The next chance for Aztec fans to hear from SDSU athletics is on GoAztecs’ “Around the Mesa” series. Track and field head coach Shelia Burrell and swimming and diving head coach Mike Shrader will be interviewed on Wednesday and Friday at 10:30 a.m., respectively.