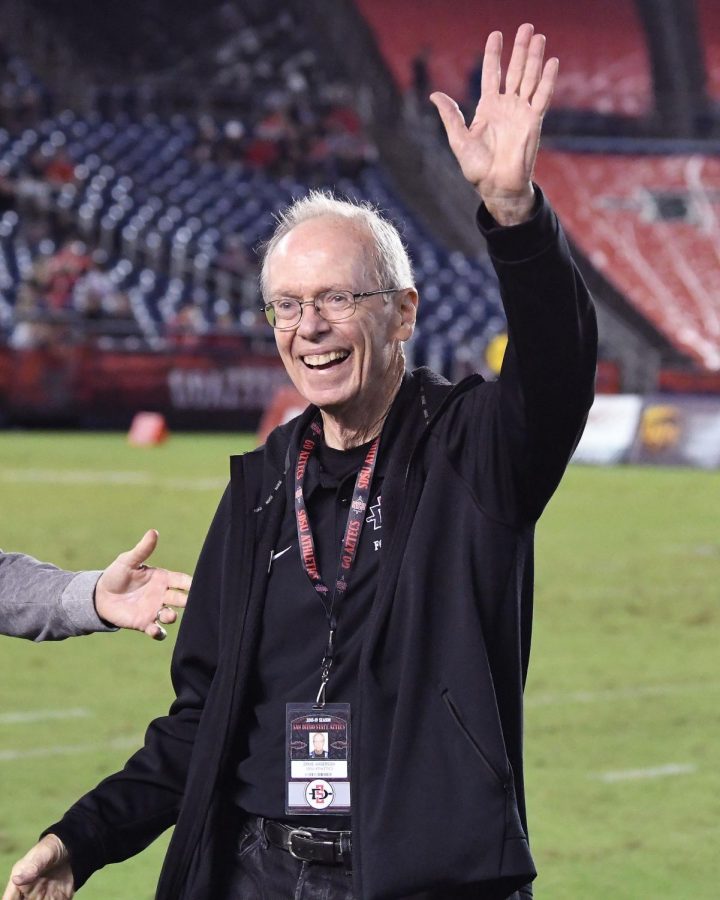 Ernie Anderson was inducted into the Aztecs Hall of Fame in 2018.

If you can recall an SDSU athlete, there is a good chance Anderson took their photo.

Even during the 2019-20 school year, Anderson was capturing the moments up until athletics were suspended due to COVID-19. On Easter Sunday, he passed away at the age of 73 because of glioblastoma, the same form of cancer that took Sen. John McCain.

Anderson received his first camera at the age of 14 but when he was competing on the SDSU men’s track team, he realized they were not getting the coverage they deserved from The Daily Aztec. So instead of complaining, he joined the campus newspaper in the spring of 1968.

He worked his way up to photo editor and following his graduation in 1970, he used photography more as a side gig while working for the city of San Diego.

Despite working for the city, Anderson would still come to the Mesa with his camera and shoot.

For more than 50 years, Anderson volunteered his time and took photos of Aztec greats such as Tony Gwynn, Marshall Faulk, Stephen Strasburg, Ashley Henderson, Donnel Pumphrey and so many more.

He got up close in huddles when Anderson heard former SDSU coaches such as Rocky Long, Don Coryell and Steve Fisher drawing up a play in a game’s final seconds.

He attended the small events just as much as the major events.

From women’s tennis to football and men’s basketball to women’s soccer, Anderson was in attendance with his camera.

He captured SDSU’s only Division I national championship in 1973 for men’s volleyball.

He was at Tony Gwynn Stadium when Strasburg threw a no-hitter in his final home appearance in 2009.

Anderson was in Arizona when the Aztecs men’s basketball team won the program’s first NCAA tournament game in 2011. He was in Las Vegas when Donnel Pumphrey set the FBS career rushing mark in the 2016 Las Vegas Bowl.

Every opportunity he had, he was there.

Some of his photos ended up on pages of local and national magazines and newspapers, such as Sports Illustrated.

There was one time when Anderson did not capture a moment, but the event was just as memorable.

It was on Oct.12, 2018 when SDSU football faced Air Force on a cold and rainy Friday night to commemorate Hall of Fame Weekend.

Earlier in the day, Ernie attended the Hall of Fame luncheon, but without his camera.

Instead of taking photos that entire day, people took photos of him because he was inducted into the Aztec Hall of Fame with the 2018 class, symbolizing the five decades on the sidelines taking photos and capturing moments that student-athletes, coaches, media personnel and fans will never forget.

It may seem ironic that a legend comes from the sidelines, but Anderson was a legend because of what he did ー capturing historic moments that happened on the field.

The passion he had for the team, getting to talk to players and coaches on bus rides and flights, was there and it translated into memorable moments for people to look back on.

All those moments, combined with all of the iconic photos Anderson took, defines why he is Aztec Hall of Famer, but also an icon in the Aztec community.