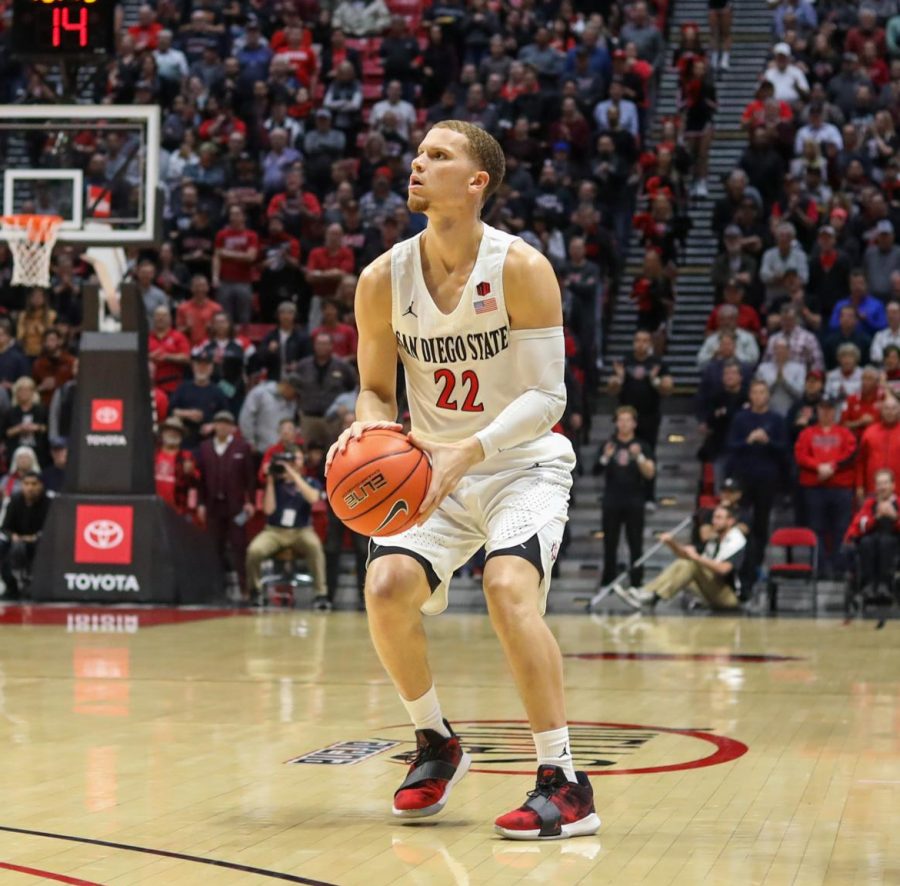 Junior guard Malachi Flynn prepares to shoot the ball during the Aztecs' 72-55 win over Wyoming on Jan. 21 at Viejas Arena.

San Diego State men’s basketball junior guard Malachi Flynn was on edge with one of the biggest decisions he has ever made.

In a year where Flynn was named a second team All-American by the Associated Press and a John R. Wooden All-American, he decided to forego his senior season of eligibility and enter his name for the 2020 NBA Draft.

“I will never forget the way the San Diego community and The Show embraced me when I made the decision to transfer to San Diego State and the support our team received during this incredible season,” Flynn said in a statement released by the university. “After receiving feedback from NBA teams and thoughtful discussions with my family and coach Dutcher, I have decided to forego my senior season and declared myself eligible for the NBA draft. I am proud to say I am an Aztec for life. Thank you, San Diego.”

According to nbadraft.net, Flynn is projected to be the 46rd pick in the draft.

Bleacher Report has Flynn going 37th overall. Both of these projections have him selected in the second round.

Looking back at the season, Flynn had one to remember ー and that is without playing in the NCAA Tournament.

“Each of us who is affiliated with the San Diego State men’s basketball family are immensely proud of Malachi and everything he has accomplished in his two years in our program,” the Aztecs’ head coach Brian Dutcher said in a statement. “When he arrived on campus, we knew he was a uniquely talented basketball player. What we quickly learned was that he had an intense work ethic and a team-first mentality which endeared him to his teammates and the community.

“I congratulate Malachi on all of his successes and along with his family, highly endorse his decision to enter the next phase of his life. Like all San Diego State fans, I look forward to watching him enjoy a long and prosperous career at the next level.”

Flynn, who was named Mountain West Conference Player of the Year, helped put him and the Aztecs on the national map in 2019-20, especially when there was no clear favorite to win the national championship.

The 6-foot-1 junior got a taste of playing on an NBA floor this past season when he scored 16 points and SDSU defeated Utah in the Basketball Hall of Fame Classic at Staples Center in December on the Los Angeles Lakers’ court.

That was one of many moments that highlighted this season for Flynn and the Aztecs ー who went 30-2.

The Tacoma, Washington guard hit a last-second shot against San Jose State in December, scored a career-high 36 points in the final regular-season game at Nevada, scored 28 points (all in the second half) against Iowa in November to win the Las Vegas Continental Tire Invitational and tournament MVP honors.

Flynn’s 36 points against the Wolf Pack helped SDSU get its 17th win in MWC play, which marks the most wins in the conference’s 21-year history.

Now, Flynn takes the next step to achieve his dream to play in the NBA.