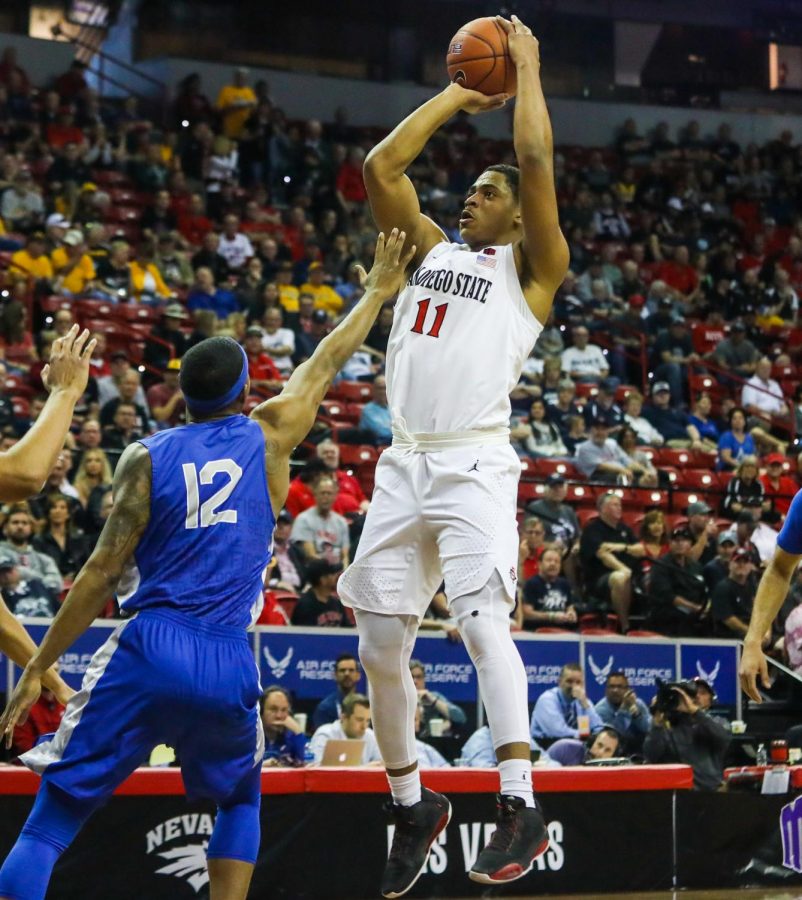 Then-junior forward Matt Mitchell pulls up for a mid-range shot during the Aztecs' 73-60 win over Air Force in the quarterfinals of the Mountain West tournament on March 5, 2020 at the Thomas & Mack Center in Las Vegas.

San Diego State men’s basketball forward Matt Mitchell decided he will test the waters of the NBA by entering his name for the upcoming draft without hiring an agent — maintaining his college eligibility.

“After careful consideration with my family and the coaching staff, I have decided to declare for the 2020 NBA Draft. However, I will not hire an agent and will keep my college eligibility,” Mitchell said. “The NBA is a lifelong dream of mine and I am going to do everything in my power to pursue this goal. If this does not end up being the right time to begin my professional career, I am excited about the opportunity to return for my senior season and what our Aztec team can accomplish in 2020-21.”

“Matt is doing this the right way, by exploring his professional goals while keeping open his option for returning,” Dutcher said. “Going through this process allows him to continue to get feedback on his game and have an open dialogue with NBA organizations. Either Matt learns that he is ready for the NBA or gains valuable data on areas where he can improve his game.  Either scenario is beneficial to both of us. No matter what happens, Matt is the better for going through this process.”

Mitchell follows the footsteps of his former teammate, Malachi Flynn, in entering his name for the 2020 NBA draft.

This allows him to be assessed by NBA teams regardless if he ends up getting selected or signed to a roster.

Although the decision might be a surprise to some, Mitchell hinted he was weighing his options for his future basketball plans during his Twitter takeover on April 7.

Next season and what it entails is a decision I will make later on. Still looking to get information and sit down with my family and coaching staff before making any decisions. #MattTakesOver

In his three years as a starter, Mitchell showed consistency — averaging over 10 points and four or more rebounds every season.

The 6-foot-6 forward finished second in conference play in free throw percentage (87.2%). That also ranks the second-highest by a player in a single season at SDSU.

Mitchell played one of his best games in the Scarlet and Black on Feb. 1 against Utah State. He scored a career-high 28 points on the night Kawhi Leonard and the Clippers were in attendance to witness Leonard’s jersey retirement in the Viejas Arena rafters.

He started the season off the bench until Jan. 1, when starting forward Nathan Mensah was deemed out with a respiratory issue. Mensah never returned and Mitchell kept his spot in the starting five.

Last offseason, Mitchell committed himself to a new diet and workout regime. He lost around 15 pounds despite having an operation to repair a meniscus.